Closed deal volume in the second quarter of 2015 raised total transport PPP investment in H1 2015 to $13.32 billion across the US and Canada, according to IJGlobal’s H1 2015 league tables. This is significantly higher than the same period last year when only three deals worth $1.38 billion closed across the region. 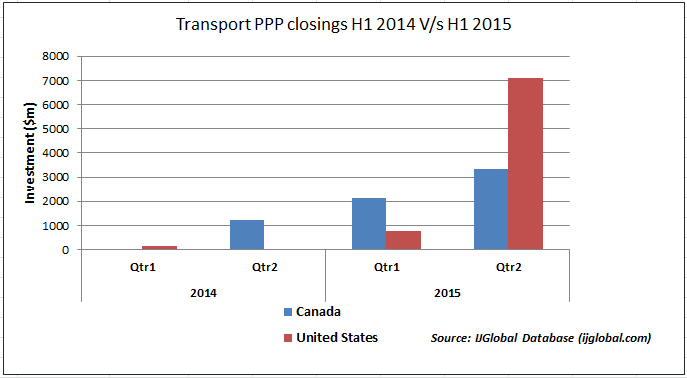 The increase in financial closes in H1 2015 is a result of new transport PPP tender launches over the past two years in North America, particularly Canada.

Canada, which has traditionally had a strong social infrastructure PPP pipeline, is gradually increasing its transit PPP pipeline in order to expand its public transportation facilities and offset the growing congestion on its roads. The country expects to deliver larger-scale civil and transit projects on time and budget by leveraging private sector expertise in the sector akin to its experience in the social infrastructure sector.

The Government of Ontario, the largest PPP procurement province within Canada, is procuring the C$5.5 billion ($4.3 billion) Eglinton light-rail transit (LRT) project. The province is also expected to launch another C$1 billion project - the Finch LRT in Toronto - in the third quarter of 2015 and an equally sized Hurontario LRT in 2016. Other provinces like Alberta and Saskatchewan have also followed suit with large scale transport PPP procurements like the Southwest Calgary ring road and the C$2 billion Regina bypass.

Transport PPP procurement, particularly in the road and bridge sector, also gained momentum in the US over the past two years as states recovered from the financial crisis and began rebuilding their economies and infrastructure pipeline. However momentum is expected to slow down in the US in H2 2015 as fewer new tender launches have taken place over the last five quarters. This is due to a combination of local state politics and value for money questions surrounding PPPs.

Colorado’s Interstate 70 and Georgia’s I 285/SR 400 are among the few large road PPPs that are in bidding phases this year. Both are expected to close in 2016. Another larger transit project - Maryland’s Purple Line LRT - which was on hold for months has finally been approved by the state's governor. But that project is not expected to reach financial close before the second quarter of 2016. Virginia's Interstate 66 expansion project - which was expected to launch as a PPP this year - is on hold until November as the state ascertains the best procurement model for the project.