Export LNG debt financings in the US first appeared in 2012. Since then, LNG has led, or nearly led, each quarter that included at least one related financial close. 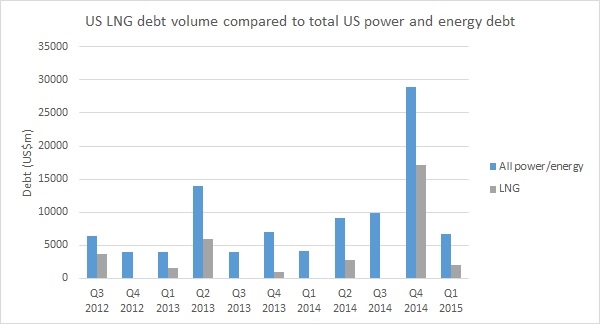 In Q1 2015, Cheniere Energy Partners (CQP) closed a $2 billion project bond for the Sabine Pass liquefaction project in Louisiana, the proceeds of which will help fund construction of the complex’s first four trains. CQP had initially floated a $1 billion bond, but strong investor interest in LNG bonds allowed the sponsor to double the issue’s size.

Banks have been just as eager for export LNG financings, and perhaps more so. Bankers say that LNG financings closed since 2012 have helped their project finance businesses meet budgetary aims.

CQP was the first sponsor to close an export LNG debt financing in the US, for Sabine Pass, in Q3 2012. Starting with that quarter, the US has closed $34 billion of export LNG debt – from banks and bond investors – or 35% of privately financed domestic energy and power debt.

Three projects have contributed to all of the export LNG debt in the US – Sabine Pass, Cameron LNG and Freeport LNG. Sabine Pass has amassed the most debt, and has been the lone issuer of project bonds.

In Q4 2014, export LNG projects made up more than half of overall US energy and power debt – 59%, thanks to Freeport LNG and Cameron LNG.

Export LNG will likely continue its dominance through year-end – but perhaps not beyond. The collapse in global oil and gas prices prompted some sponsors to postpone planned LNG projects. But at least two projects are expected to close financing before year-end: Freeport LNG’s third train ($3.5 billion in debt) and the first two trains at Cheniere Energy’s Corpus Christi project ($7-8 billion in debt).