Sponsors of UK biomass projects are rushing to close financings and complete commissioning before the 31 March 2017 sunset of the country’s renewable obligation certificate (ROC) scheme. Ten projects closed on deals from 1 July 2014 through 31 March 2015, according to IJGlobal data.

The sponsors are aiming to commission the plant, located on the eponymous port on the river Thames, in early 2017 to satisfy ROC requirements. Construction is expected to take 28 months.

The UK Green Investment Bank (GIB) and Irish electricity utility Electricity Supply Board (ESB) each provided £35 million in equity and shareholder loans for the £172 million project. Danish technology provider Aalborg Energie Technik invested £2 million in equity and shareholder loans. The commitments give the GIB and ESB 49% stakes, with Aalborg holding a roughly 2% interest.

The gearing is understood to be nearly 60%. The three lenders provided separate, albeit pari passu, tranches of senior debt:

EKF is one of several Danish players involved in the Tilbury project.

The heavy Danish support fits a broader trend: Denmark is a key leader in European biomass, both as a regional financier and for its domestic use of the fuel.

The engineering firm has been involved in multiple UK biomass projects alongside Danish lenders. In November 2014 Burmeister co-sponsored the 20.2MW Widnes biomass project in Wales, which raised debt from EKF. The following month, Burmeister, Copenhagen Infrastructure Partners and PensionDanmark provided DKr1.6 billion ($228 million) to the 44.2MW Snetterton project in Wales.

The Tilbury financing used Denmark’s export loan scheme (ELO) funding model, which involves funding from the Danish national bank. Under the scheme, Danmarks Nationalbank issues state bonds and on-lends the money to a commercial bank – Investec, in the case of Tilbury. The commercial bank then lends the money to EKF, which guarantees that the Danish national bank will be re-paid.

EKF entered the UK biomass market in 2006 with its investment in the £33 million Margam project. Tilbury marks the fourth UK biomass project that EKF has lent on, and the third to use the ELO structure. EKF participated in the £110 million Widnes and the £81 million Evermore biomass projects, both of which used ELO.

The first quarter of 2015 was especially active – $1.3 billion, according to IJGlobal data. The strong start to 2015 may suggest a growing market, or the rush to close finance before the expiration of the ROC scheme. 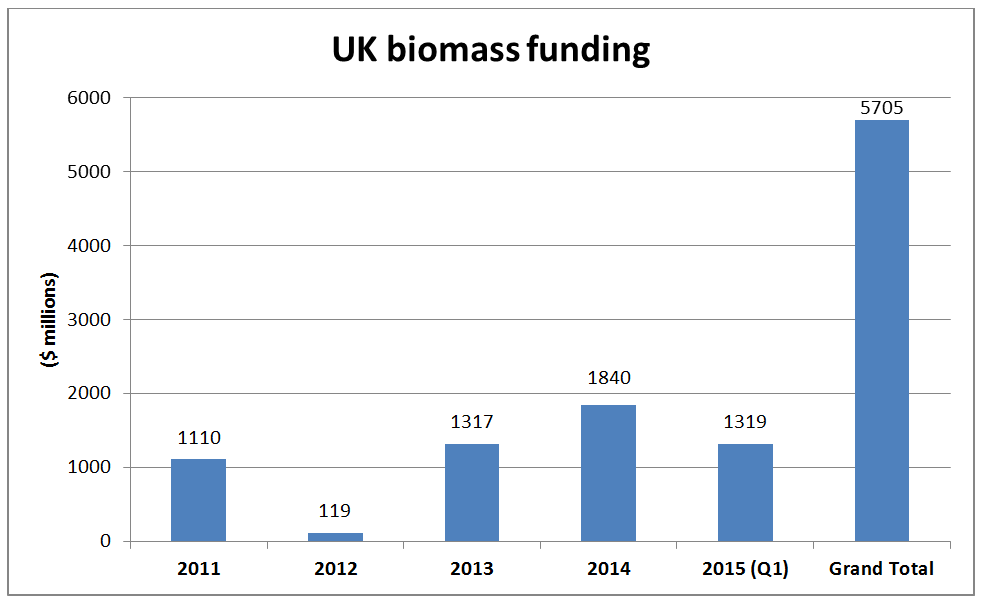 “The cut-off date for ROCs being made available to biomass CHP is the end of March 2017 and so facilities need to be commissioned and operational by then otherwise they are not eligible for ROCs and can only apply for CfDs,” Walsh said. As a result, sponsors have pushed to reach financial close early in 2015 to allow sufficient time to build and commission their projects.

Walsh expects the pace of UK biomass financial closings will slow in the aftermath of the ROC scheme. But financings are still likely to reach market under the CfD regime.

Uncertain fuel prices have doomed many biomass projects in the UK and abroad. But Tilbury benefits from predictable fuel prices.

Tilbury has a 15-year contract with British support services firm Stobart to supply 270,000 tonnes of wastewood annually, starting in March 2017. Stobart will provide wood of grades B and C to the plant at a fixed price per tonne as well as a variable price on top of that.

Stobart is also investing £7.5 million to build a processing facility adjacent to the Tilbury plant. Stobart Rail will build the facility, which will process the plant’s fuel.