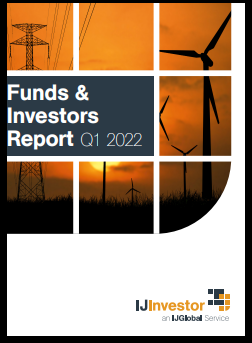 The contrast to a year ago couldn’t be more stark: this time last year, IJInvestor wrote that 2021’s Q1 was the poorest showing in 5 years, but 2022 Q1 looks to be – by a good margin – among the strongest. The sluggish start to Q1 2021 belied the promise of the year, with a record breaking $136 billion in total capital.

The astonishing result is that Q1 2022 has already brought in close to half that figure with $65 billion already banked by infrastructure investment vehicles. It is 3 times as much the same period last year. This exceptionally strong quarter was achieved by 24 funds holding final closes.

Global strategies continue to attract a significant share of capital with 36% of such funds holding a final close. North America had a strong showing with 25% of capital raised earmarked for investment there.

Elsewhere, those funds targeting Europe and multiple jurisdictions accounted for 18% apiece of all capital raised – around $23 billion combined. Asia Pacific posted a modest quarter with just 1% of all capital, or just under $1 billion, with the majority issuing from one $741 million renewable energy vehicle.

Anecdotal evidence from managers over the previous quarter suggests this situation will become more rare in years to come: several European renewables investors are turning their attentions to the East and expect to launch vehicles there in the next 12 months.

On investment sectors targeted by vehicles holding final close in Q1, the data show the continued dominance of multi-sectorial funds. A total of 27% of funds targeted all sectors tracked by IJInvestor, whereas 54% had investment mandates covering multiple sectors. Energy funds were a sizable minority at 7.7%, though aggregating funds focused on water, telecoms, renewables, power and oil & gas amounted to less than 12% of capital raised.

Q1 was a strong quarter for M&A transactions with close to $95 billion spent on investments. North America and Europe dominated spending on assets with $51 billion (54%) and $36 billion (38%) spent respectively in these geographies.

Telecoms and renewables continue their strong representation in deal making. IJInvestor deal tracking showed each accounted for 24% of all deals done this quarter, equivalent to about $22 billion apiece.

Renewables by deal count remains potent at 60%, though telecoms’ share at 13%, speaks to the high prices commanded by these assets. Transport remains flat at 6% as it continues its multi-year pandemic recovery, though O&G transactions have had a strong rebound from 2% in Q1 2021 to 16% a year later.