The independent judging panel for the IJGlobal ESG Awards trimmed the shortlist for the financial advisory award to just the two players – selecting Cranmore Partners as the eventual winner.

In a straight shoot out against PwC, the financial advisory boutique won a David v Goliath battle against the Big 4 adviser, winning accolades from the judges over its impressive performance on the ESG front during the judging period.

The win for Cranmore is all the more impressive given its diminutive nature… when compared with PwC. The firm has offices in Abu Dhabi, London and Istanbul though it is active on projects globally, with primary focus on the wider Middle East, Central Asia and Africa.

The judges were swayed towards Cranmore based on a “significant and focused ESG commitment from a boutique advisory firm” in addition to a “decent range of transactions, and first mover across these”.

The praise for Cranmore was plentiful, celebrating its “good and important work in GCC” and an “impressive strategy given the region in which they're operating, allowing them to offer something genuinely different.” It was also lauded for “pioneering new technologies” for its work with green hydrogen.

One judge who clearly was impressed by the PwC submission said: “A very close call, but Cranmore comes first due to pioneering role it has played in a region dominated by hard-to-abate businesses, which will help not only to develop more needed projects but also sets the bar for regional peers.”

This comment was joined by another that singled the Big 4 leader out for praise: “PwC deserves recognition due to its global reach, diversity of sectors and ESG topics addressed as well as the scale of its efforts – for example 100,000 new dedicated hires in 5 years.”

Another judge who favoured Cranmore adds: “Cranmore positions itself as a thought leader in sustainability, and this was clear from their submission, particularly in the precision with which they spoke about large-scale deployment of green hydrogen. Furthermore, we appreciated their geographic breadth of transaction examples across Uzbekistan, Turkey and Spain.”

A further judge says: “Cranmore’s enthusiastic promotion of sustainability in jurisdictions where this can be harder to achieve set it apart from the other submissions who arguably have more ESG-focused client bases and balance sheet to help their case. Their work appears to genuinely focus on trying to deliver a more sustainable society for all.”

Finally one caps off: “Cranmore’s boutique nature and the ‘exotic’ jurisdictions they have been able to take a leading ESG role in commends them to me. Cranmore reflects strength and breadth across a range of portfolios and markets.” 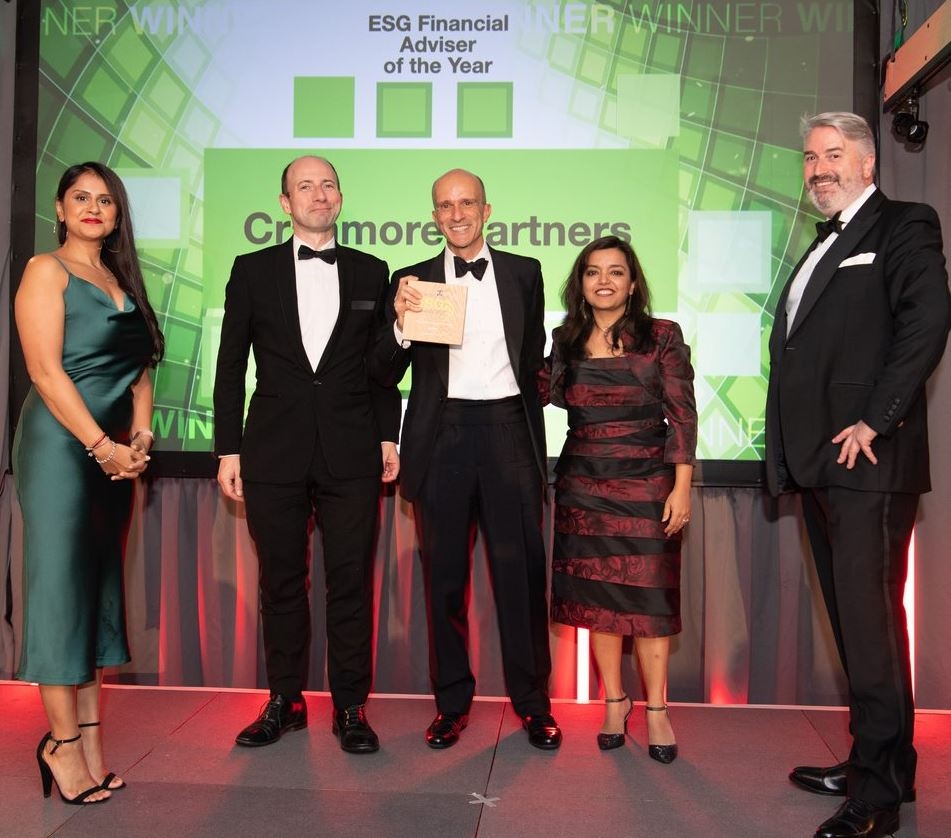 Cranmore Partners founder and managing partner Yusuf Macun said: “We are humbled, and of course delighted, to receive the recognition of our peers and key market practitioners for this landmark award.

“The combination of the professional edge to support our market-leading clients on their successes in this very competitive space, and the core belief of the necessity to commit to energy transition, has continued to secure our clients’ trust, which we are grateful for.”

Yusuf added: “The commitment to ESG also drives us over and beyond successes on transactions. For instance the Hydrogen Investability Index, which took about 10-15% of our overall team’s time over the last 6-7 months, was done without any expectation other than accelerating the understanding of the clean hydrogen investment theme.”

The Cranmore submission focused on the role it has played in the United Arab Emirates promoting and advising on renewable energy transaction as well as leading the agenda on green hydrogen across the region.

It also picks out EnerjiSA Uretim, the 3.6GW portfolio financing in Turkey – the largest sustainability (ESG) linked transaction in country to date, and Nur Navoi, the first large-scale renewables development to be financed in Uzbekistan that set a precedent for the government's ambitious 8GW pipeline of new solar and wind to come by 2030.