Few things warm the heart of an infra hack more than projects being won… but when it comes to airports in Mexico, that’s more likely to elicit wails of anguish. The latest development on the ground (not so much in the air) is a farce of monumental proportions – on a similar scale, indeed, to the scrapping the under-construction airport in 2018.

For those who have been tracking the regional infra market, cast your memory back to the glorious Nuevo Aeropuerto Internacional de México (NAIM) that bit the dust in late 2018, a victim of then president elect Andrés Manuel López Obrador (AMLO) flexing his muscles in anticipation of taking the reins on 1 December 2018.

The fate of NAIM is well documented in these pages and there’s little sense dwelling on the woeful demise of this architecturally glorious, $13.3 billion, Norman Foster airport that was 31% through construction… only to be axed in a cloud of nationalist euphoria and non-sensical ramblings.

Hard as it is to walk away from this outstanding project that the SPV Grupo Aeroportuario de la Ciudad de México (GACM) – comprising Acciona, FCC, Grupo Carso, GIA, Prodomex, La Penninsular and ICA with Carlos Slim heavily invested – was well on the way to delivering… sometimes you just have to shrug and slink off.

The only consolation you can take is… surely it can’t get any worse.

Enter stage left Felipe Ángeles International Airport (AIFA) – and the government’s revelation that the military will be delivering and operating the new facility (an alternative to NAIM) a long way from the capital – and the crowd goes wild.

It can get a lot worse

Before fully gasping in horror at this week’s development – the Mexican ministry of communications and transport (SCT) awarding the Ps 85 billion ($4.3bn) concession for Mexico City’s “alternative” to NAIM to the defence ministry (Sedena) – let’s take a closer look at the national aviation environment.

Talking to sources on the ground this week, the overwhelming sense among Mexican nationals (especially those in the infra community) is that of embarrassment at AMLO’s latest wheeze as Mexico’s international reputation suffers yet another ding.

For those not involved in the aviation world it might have passed you by, but in May (2021) Mexico’s aviation safety rating was downgraded. This effectively bars Mexican carriers from adding new US flights.

The US Federal Aviation Administration (FAA) downgraded Mexico’s airports from Category 1 (which means it complies with international security standards) to Category 2 (which means it doesn’t). For those who don’t know, there are only 2 categories!

According to the FAA, Mexico does not have the “necessary requirements to oversee the country's air carriers in accordance with minimum international safety standards, or the civil aviation authority is lacking in one or more areas such as technical expertise, trained personnel, record keeping, inspection procedures or resolution of safety concerns”.

From what sources on the ground say, Mexico is merrily ticking all these boxes having sacked a swathe of the experienced traffic controllers and now passing control of the construction and operation of this new airport to the military.

This could not come at a worse time for Mexico as traveller stats to and from the country had – pre-Covid – been trending up impressively.

According to Statista.com, in 2019 around 102.5 million air passengers travelled to or from Mexico on domestic and international flights. This represents an increase of more than 103% against figures from the start of the decade (2010).

Looking at those stats, there are year-on-year increases in traffic and – ignoring Covid-19 figures for 2020 and 2021 (which aren’t available yet in any case) – this trend looks set to continue… if Mexico was allowed to increase the number of flights!

But that’s all circumstantial. What about the location? Surely that’s a key point as Nuevo Aeropuerto Internacional de México (the one that was scrapped) was in a fantastic position, close to the capital centre, good transport links… not to mention lots of detailed studies into airspace and location. You know, all the good stuff.

So, where is Felipe Ángeles?

Mexico City is serviced by 3 airports – to the north, west and one in the centre. NAIM was famed for its central location some 5km from the city centre on a site that is now being transformed (with some embarrassment and at great speed) into an “ecological park”.

The former Santa Lucía military airbase – the site of the Felipe Ángeles International Airport (which one source describes as looking like a bus station and pictured right) – we are told will be operational in March 2022 is located around 50km north of the city.

The closest airport to the city itself – in Peñon de los Baños, about 5km to the east of the city centre – is MCIA, the city’s original airport and the busiest for passenger through-travel in Latin America.

Now let’s just reel that back to Felipe Ángeles (internal image below left) and take a closer look at this location. An airport serving a major international city from a distance of 50km (my sources say it’s closer to 60km) is not the end of the world… if you have adequate connectivity.

And therein lies the rub.

Getting to MCIA is a chore for people who live in Mexico City… but it’s manageable as they know it takes about 2 hours to get there when you live locally. But you can factor that in. 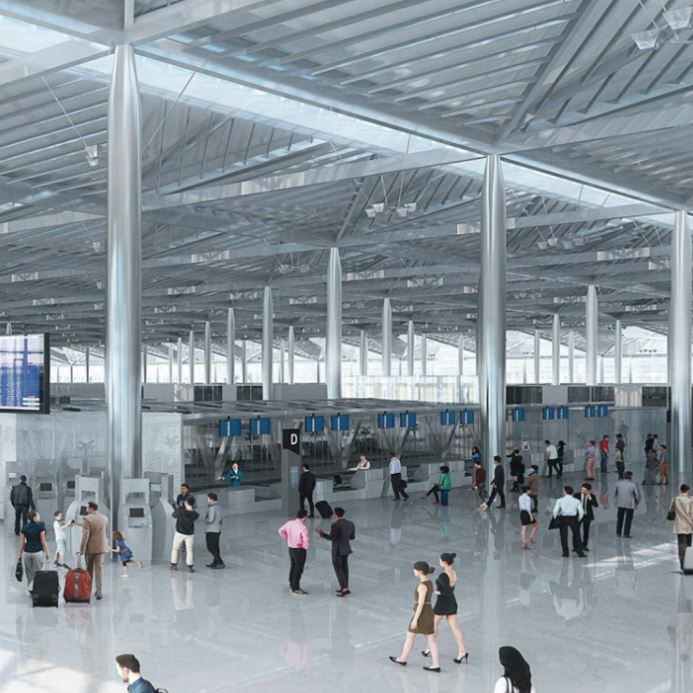 It’s a very different kettle of fish when trying to get out to Santa Lucía which is serviced by a dual carriageway that is in poor condition and congested round the clock. Sources say that travelling from the city centre to the site of the new airport at 7am will take 2-and-a-half hours… but a couple of hours later in the day and you’re looking at a 4-hour one-way trip.

And it gets worse, as one source points out… if you’re flying to Mexico from London and transferring on to Cancun – which would involve switching airports – it could take as much as 6 hours to get from one to the other.

If only there was some sort of a train…

Well if you listen to the Mexican government, plans are afoot to drive a rail line out to Santa Lucía and have it operational in the second half of 2023 (long after the airport allegedly opens in March 2022), but sources squawk with derision when asked about it.

There is a 23km freight line which one source describes as “a mess” that does not go into the centre of Mexico City. And plans for a dedicated rail route to the airport are written off as disingenuous PR as the government cannot afford it.

“They would have to lay all the track to get to the airport and they haven’t even started the work,” says one source. “They say they will buy double-decker trains and connect to the airport. But honestly, there is nothing in place.”

Due diligence… it’s not an option

Well now, when it comes to planning for the construction of an airport, due diligence is not so much a nice-to-have, it’s essential. However, sources in Mexico say that planning for Felipe Ángeles International Airport has been through none of this.

The same cannot be said for NAIM. Studies for this airport at the Texcoco site were comprehensive and positive… which is why the previous administration chose to build it there.

A report into alternatives to NAIM not so long ago identified the Santa Lucía site as being very much the wrong location for a host of reasons… but the Mexican government insists it has conducted all necessary studies.

There was a report conducted by Navblue on aviation in Mexico that identifies MCIA is operating at capacity, but nowhere in that report does it identify the Santa Lucía site as a viable option.

This choice to shun Santa Lucía is stood up by a recent experiment in which one of the low-cost airlines landed at FAIA… which resulted in all aircraft at the other 2 facilities being grounded due to lack of airspace.

It was deemed unsafe for all sites to be operating concurrently… which doesn’t bode terribly well for the future operation of the facility!

“This is an example of what will happen when the Santa Lucía site enters operations,” says a source in Mexico. “If you want to take off from Santa Lucía, all the airplanes in Mexico City and Toluca will have to be on the ground. There is no possibility for them to take off at the same time.

“The frequency of flights will be exactly the same because we don’t have space – and that is the main problem. That is why Navblue avoided mentioning anything about the possibility of these 3 airports operating at the same time.”

The source continues: “The government has been asked how it will manage air traffic knowing that these 3 airports cannot operate at the same time… and the reply was that with new technology, airplanes fly themselves and they will not crash – never.

“That is an example of how they are trying to do things, but with no idea of how to do them. For example, when they started to build the airport, they realised that one of the runways headed straight into a mountain.

“It is embarrassing and there are a lot of examples that could make you laugh for a full day.”

It’s not the first time that AMLO has pulled this military stunt. It is not so long ago that he tried (unsuccessfully) to switch over the port concessions to military ownership and management.

But with Felipe Ángeles (logo right), it looks like he has won the day.

The concession will formally be held by Aeropuerto Internacional Felipe Ángeles – a company formed in December 2020 – comprising the Ministry of National Defence (Sedena) holding 99% and the National Army, Air Force and Navy Bank (Banjercito) with a humble 1%.

The airport will be managed by staff from the defence ministry, who have received 42 courses and workshops from the transport ministry on topics that range in depth from construction of airports through to aeronautic law.

There you go… that’s covered all the bases. It might come as a surprise to some that it’s so easy to run airports and ensure the safety of 102.5 million lives on an annual basis.

A source in Mexico City says: “The consensus of opinion in Mexico is that this airport is a waste of time and money.”