From its roots as Development Bank of Singapore to today as Southeast Asia’s largest bank by assets, DBS is a mainstay across Asia’s energy and infrastructure finance market.

DBS provided financial advice on many consequential transactions that closed in 2020. Our team of Asia-based independent judges, who virtually met in April this year, voted the Singapore-headquartered bank IJGlobal Financial Adviser of the Year for the Asia Pacific region.

“DBS had a strong diversified set of mandates with a robust green focus,” said one of the judges. 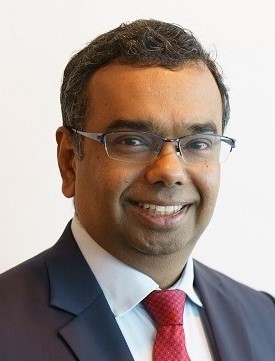 “It’s spot on in terms of what we are trying to do as an Asian bank,” Subash says. “We’re very happy to know the market is recognising us in the renewables space. We’ve seen our exposure to renewables grow rapidly during the past few years – from S$0.29 billion in 2016 to S$4.2billion in 2020.”

In 2020, DBS participated across a range of technologies in renewables, including on and offshore wind, hybrids and geothermal. Its advice on 2 floating solar financings – the large, groundbreaking 180MW Changhua Lundong floater in Taiwan and the 60MW Tengeh Reservoir floater in Singapore – caught the eye of judges.

“Our spread across technologies gives us the confidence we can do more,” Subash adds. “We have upcoming battery deals, including important mandates in India and Indonesia’s renewables-plus-battery storage markets. We continue to move up the value chain tackling state of the art technologies.”

The judges also candidly discussed DBS’ performance. “I really struggled because of the coal project,” said a judge. Others echoed the sentiment.

DBS was the financial adviser on the 2GW Java 9 & 10 coal-fired power complex in Indonesia. The bank raised $1.1 billion of $2.5 billion from commercial banks, one of Indonesia’s largest commercial tranches for greenfield IPP financing.

Subash takes the feedback in stride as the Indonesian project is the bank’s last in coal.

“We were one of the early Asian banks to come out with a coal phase-out strategy, exiting first sub-critical coal and now all of coal power including greenfield IPPs,” says Subash.

“We had the Java mandate since 2017. It was important for our commitment to clients that we finish the job because they value steady, dependable and resourceful teams with lots of patience and perseverance, especially in Asia where advisory mandates can take many years.”

DBS also had to manage challenging aspects of conflicts of interest. A subsidiary of Indonesian state-owned utility PLN held a majority in the project company. The deal required a bespoke corporate governance solution to satisfy lender concerns because PLN was also the offtaker. It’s a possible model for future Indonesian IPPs.

“This was the first deal closed with a PLN subsidiary as majority shareholder,” says Subash. “Indonesia adapted the shareholder/ offtaker model from the Middle East. However, a major difference is the Middle Eastern sponsors tend to be investment grade – A or AA rated entities. Here, the PLN subsidiary was a BBB first time risk. The commercial banks and the long-term debt providers, the Korean ECAs, had to work towards quite a different funding plan.”

The World Bank negative pledge with Indonesia preventing lenders from securing the assets of state-controlled projects also complicated the structuring.

A judge complimented DBS’ tenacity in working with a large state-owned sponsor. “They had to work around the PLN and all the share pledges issues. It was an important and difficult deal,” said the judge.

Java 9 & 10 also demonstrated the bank’s growing capabilities in equity advisory. Subash’s team worked with the DBS strategic advisory team to bring in Kepco as a foreign sponsor. “We’re venturing more into the M&A space,” he says.

DBS is also equity financial adviser on a gas-fired power plant in Bangladesh.

Subash stresses the importance of repeat clients like Sembcorp, a Singaporean energy and urban development company. He also emphasises the bank-wide capabilities at DBS.

“It’s pleasing to see clients appreciate our work and want us in the mix again. Repeat clients validate the work we do and the value we provide,” Subash says. “We are also keen to bring in ancillary, value-added services, such as being the account bank or providing a performance bond.

DBS was FA, MLA, account bank, facility agent, security agent and hedging bank for the financing of the 180MW floating solar in Taiwan.

Asia’s financial advisory market is distinct from other regions. A main difference from Australia, Europe or the US is the time these mandates need to close.

“In Australia or Europe,” says Subash, “a sponsor may plan for a 12-month transaction. It will tend to get done within 12 to 16 months. Here in Asia the expectation is double that, if not more. Not only does the market need patient capital it also needs teams that prize perseverance to follow the deal through.”

Subash reflects, “Clients value people who understand local markets. We need to have people with patience and, as an Asian bank, we know how the market works.”