In recent years, Asia-Pacific has been one of the fastest developing markets for infrastructure funds. As the region increasingly opens up to global investments, its economies and infra development are growing significantly.

More vehicles with broad investment mandates are including Asia-Pacific within their opportunity set. As the influence of APAC-focused regional funds continues, APAC hyper specialised funds are on the rise. Meanwhile, understanding the drivers behind APAC’s ascent may signal future direction of the fundraising market. Besides macroeconomic considerations including the impact of post-Covid recovery plans on the appetite of limited partners, fundraisers are struggling with perennial questions about resource allocation.

Looking at the international fundraising market, we see that progressively more vehicles with broad investment mandates are incorporating Asia and the Pacific in their target regions – 24% in 2020, in comparison to an average of 17% over the past 10 years. 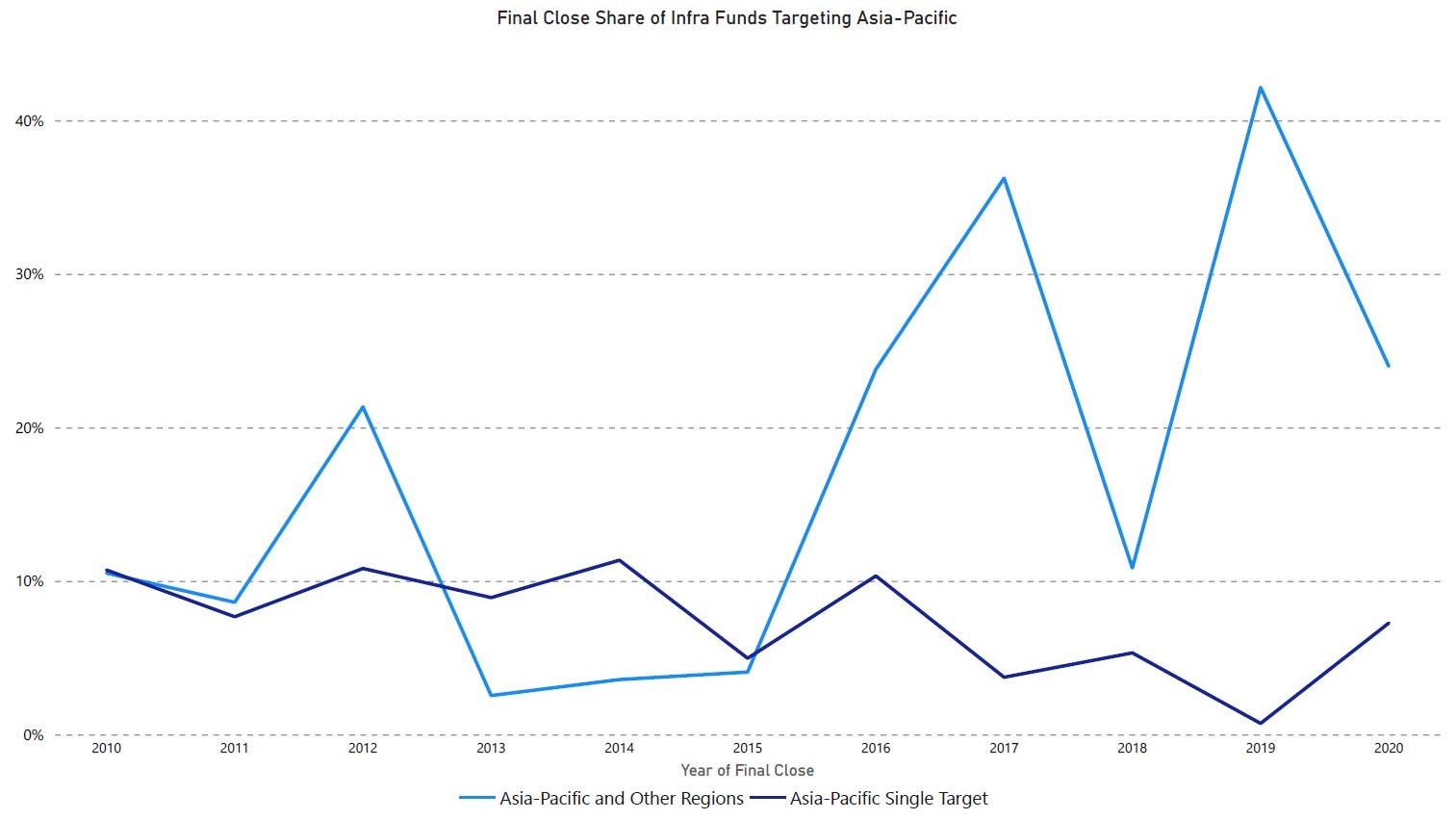 Even though 2020 recorded a drop in the final close share of funds targeting Asia-Pacific among other regions, the growth it achieved during the past 5 years is remarkable – it hit a 42% peak in 2019 after previously maintaining a 4% share. While these funds are mostly domiciled in North America and Europe (97%), 80% of the vehicles having selected Asia and the Pacific as a single target are raised by local firms.

Since the APAC region has become more favourable to inbound investments, global fund managers are more frequently taking risk-associated opportunities in the region. According to IJInvestor data, the largest Asia-Pacific focused fund raised so far is managed by the global fund manager KKR.

IJInvestor data shows that vehicles focusing solely on the Asia-Pacific region collected almost $8 billion in total commitments, among funds that reached final close in 2020. This amount is 115% more than the total capital raised by such funds in 2010, and 53% more than the average final close size for 2010-2020.

Our latest IJInvestor Funds & Investors Report reveals that in Q1 2021 only, single-target APAC funds collectively gathered $4.8 billion at final close – already more than half of the capital raised by such funds for the entire last year. 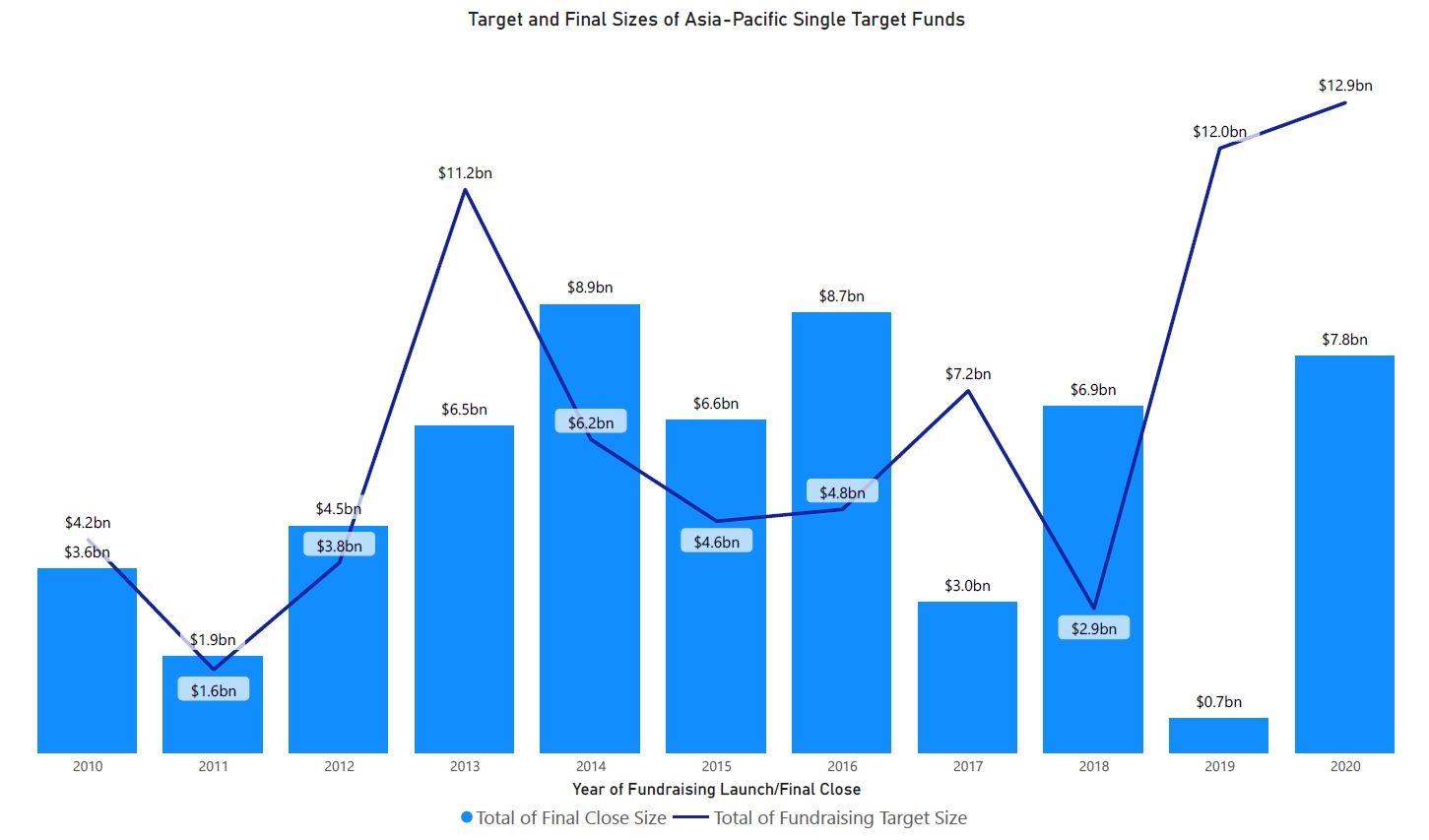 But Asia-Pacific hyper specialised funds are on the rise

Hyper specialised funds combine a targeted jurisdiction and subsector. An example in Asia-Pacific is Japan Green Infrastructure Fund (JGIF). Canadian Solar and Macquarie Group in February 2021 completed their fundraising for the Japan-focused solar energy fund, with plans for similar platforms in Europe and Latin America.

Canadian Solar and Macquarie are general partners to the fund, holding stakes of 67% and 33%. Together with Macquarie and other cornerstone investors, JGIF secured JPY 22 billion ($208m) of capital to build and acquire new solar projects in Japan. It will also consider investing in green bond placements and project finance loans as it expands.

The fundraising target of Asia-Pacific vehicles launched last year reached the record volume of almost $13 billion. Around 10% of them were established by smaller players, each of them allocating not more than $500 million towards investments in emerging infrastructure, with a focus on environmental and social assets.

Last year (2020) also scored a 6% increase in the share of solely Asia-Pacific concentrated funds on the global fundraising market. These funds form 7% of the overall capital raised by infrastructure funds during the period 2010-2020. As this change may seem indistinguishable compared to previous years, recent fundraising activity already signals that the line will continue to go up.

Recent market analysis underscores that Asia and the Pacific are offering some of the most favourable macroeconomic conditions. The region is expected to account for more than half of the world’s economic growth in the upcoming years.

During the past year, several factors – including fast-evolving technologies and rising socio-political changes – have influenced the need for changes in infrastructure planning and delivery. Governments are also facing global challenges such as climate change, ageing assets, and technological disruption, and they are figuring out how to satisfy current and future needs.

Sectors such as renewables, social infra and transport are receiving more attention from APAC fund managers. More than half of the capital raised by Asia-Pacific focused funds last year is concentrated on renewables. One-third of these funds have selected renewable energy as a single sector target.

In the fundraising market, Australia-based Federation Asset Management's inaugural green energy trust – Sustainable Australian Real Assets Fund – aims to raise and invest more than AUD 1 billion in wind and solar energy. The firm has initially selected an opportunity set of Australia and New Zealand, though the team is considering assets in the Asian continent, particularly Taiwan and Korea.

Export-Import Bank of Korea’s newly established Global ESG Fund intends to invest around $180 million to help Korean companies with their overseas expansion in the areas of green energy, digital infrastructure and healthcare, while helping them adopt ESG values in the process.

As part of its initiative to address the climate change, global financial group MUFG, for example, recently established a Renewable Energy Fund with a goal to obtain 100% of MUFG Bank’s electricity from renewable energy sources.

May signal the future direction of the fundraising market

Four one-billion-plus target funds appeared on the Asia-Pacific market in 2020, with Macquarie Asia Infrastructure Fund 3 being the largest. Another fund is the Southeast Asia Clean Energy Facility (SEACEF), managed by Singapore-based Clime Capital. The vehicle targets investing $2.5 billion in early-stage projects when they are perceived to be high risk investments, but in proven technologies and business models such as wind, solar, energy storage, transmission infrastructure, energy efficiency and electric mobility. It focuses on the Philippines, Vietnam, and Indonesia.

The largest APAC fund still open for investors is CICC Infrastructure Fund II, which launched in 2019 with an initial target of CNY 30 billion ($4.7b) and a CNY 50 billion ($7.8bn) hard cap. 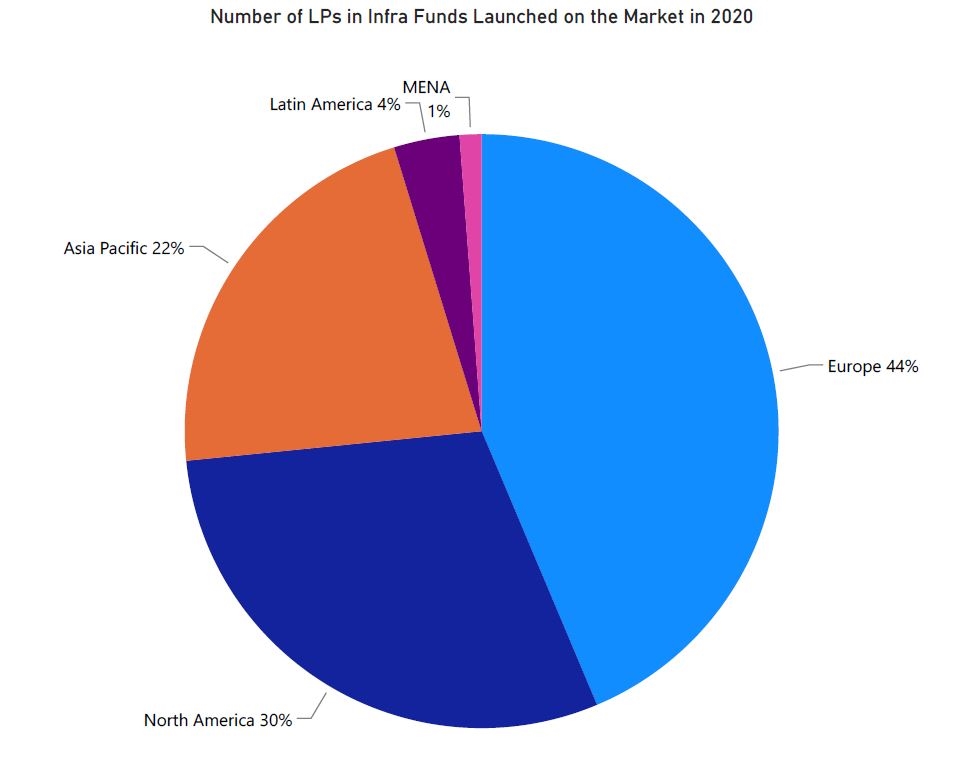 Data from IJInvestor also implies that Asian LPs have been recently favouring investments in newly-launched vehicles, as opposed to North American institutional investors, which tend to be more cautious and prefer funds nearing their final close. The number of Asian investors in funds initiated in 2020 (22%) is higher than the number of Asian LPs committing to funds which held their final closes in 2020 (16%).

According to IJInvestor’s LP Intelligence database, one of the largest contributions to APAC funds that began raising capital in 2020 is the $150 million ticket of the Asian Infrastructure Investment Bank (AIIB) to Keppel Asia Infrastructure Fund. AIIB’s commitment, $100 million with co-investments of up to $50 million, was announced in March 2020 and helped Keppel’s vehicle reach a $570 million second close.

IJInvestor’s research also indicates that the average time an Asia-Pacific fund spends from fundraising launch to final close is 14 months. Bearing that in mind, the growing size of APAC funds could be explained by the higher fundraising targets set in the previous years. The record collective target of $12 billion in 2019, progressing to almost $13 billion last year, raises expectations even higher.

While Coronavirus has hit the world economy and slowed down its development, some regions have managed to recover faster than others. According to various sources, on a quarterly basis, nations that have handled the virus best have demonstrated higher economic performance. Such Asian countries are China, Japan and South Korea. They also lead the list of markets getting more attractive to fund managers, along with other countries such as Australia, New Zealand, Philippines, Vietnam, and Indonesia.

As part of its post-Covid-19 relief package, China is planning to build new digital infrastructure across the country, including 5G networks, artificial intelligence (AI), Internet of Things (IoT) and intercity high-speed rail. This was announced by the government at the 2020 National People’s Congress in addition to the approximately $1.4 trillion digital infra public spending programme.

Following this course, Chinese private equity management company Gaw Capital closed its Internet Data Center Platform at $1.3 billion in September 2020. A wholly-owned subsidiary of the Abu Dhabi Investment Authority (ADIA) is the largest investor in the platform, which is also among the largest APAC funds raised in 2020. Earlier in 2019, Gaw Capital formed a joint venture with Centrin Data to acquire, develop and operate a portfolio of hyper-scale IDC projects in China.

Just across the sea, Japan is dedicating a budget of JPY 5 billion to support the self-production and consumption of solar energy as one of its actions on climate change and environmental protection in the context of Covid-19 recovery. An increasing number of Japanese businesses have made RE100 declarations, committing to use 100% renewable energy in their electricity consumption by 2050.

With decisions about resource allocation

Besides macroeconomic considerations including the impact of post-Covid recovery plans on the appetites of limited partners, fundraisers are struggling with perennial questions about resource allocation.

An Asia-based managing director of a North American institutional investor told IJInvestor one of their biggest takeaways from the pandemic has been the correlation between activity level of investment managers and the number of offices in Asia-Pacific.

Among fundraisers coming to market in 2021, German asset manager Aquila Capital’s decision to expand its Singapore team to launch an APAC fund for European investors in late 2021 may be the latest nail in the coffin of fundraising by FIFO – fly-in, fly-out.

Aquila plans to develop a 300-400MW pipeline of Asian wind and solar assets for the new fund, which could target a fund size of a few hundred million euros, but under €500 million ($606m).

Given the insular nature of the Asian markets, the fund manager is seeking partnerships with local developers to help build out the pipeline in their home markets. As a result, the final portfolio might have varying levels of exposure to each asset via various partnerships and joint ventures.