R&D is leading the turbine manufacturer agenda, rolling out ever-larger units for a market that is not ready to deploy them. In such a fast-moving environment, it is only a matter of time before their efforts pay dividends, writes IJGlobal reporter Elliot Hayes

Research and development is leading the agenda for wind turbine manufacturers as they roll out ever-larger units for a market that is not quite ready to deploy them. However, in such a fast-moving environment where big is beautiful, it is only a matter of time before their efforts pay dividends. 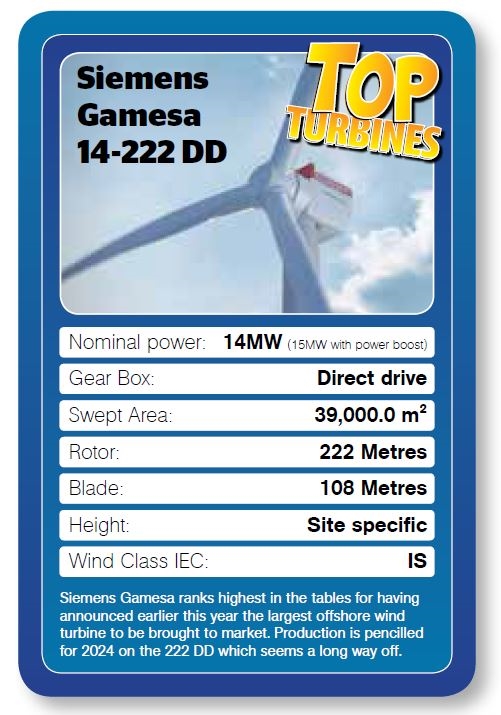 While there will always be a role for the land-based turbines which tend to range in size from 1MW at the humble end of the scale to 7MW where planning permission can be achieved, the R&D efforts are being focused where the turbine manufacturers believe the market is shifting – offshore.

To this end, there is constant competition among the market leaders to roll out increasingly-large units with the biggest model commercially available at the time of going to press being the 14MW offering from Siemens Gamesa.

Size does not always matter when it comes to turbines, however. With the launch of bigger and more powerful turbines, it does not render its smaller counterparts obsolete.

Siemens Gamesa seems to have covered itself from all angles with a selection of turbines ranging from a 2.1MW unit straight up to its 14MW power house announced earlier this year.

However, there are reasons to choose a smaller turbines, pricing is what first comes to mind and of course regulations surrounding the visibility of turbines from shore are also a big factor, not forgetting (in some cases) impact on military radars. 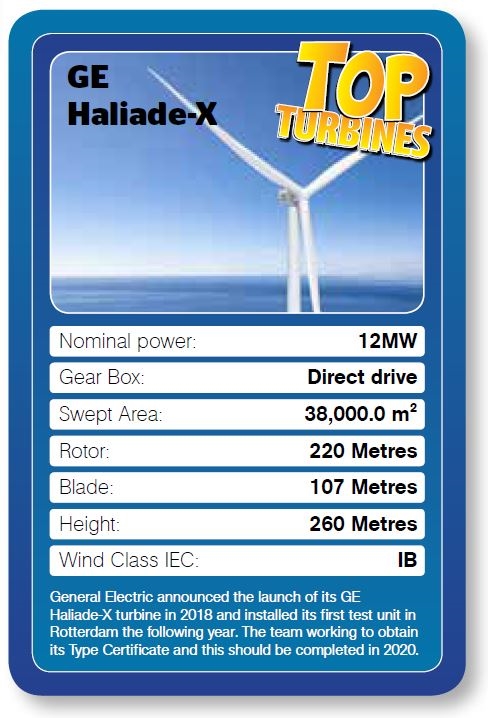 Granted, the more powerful the turbine the fewer the number of units the developer will need to install to achieve the total windfarm’s required output, which is especially important when working offshore installing them on the seabed… not to mention the previously-agreed placement of units with the relevant planning department.

With the introduction of floating offshore wind and its apparent approval from the finance community, just how big turbines will get in the next few years is a matter for conjecture.

Lenders wring their hands at the notion of turbines growing beyond their comfort zone and suggest that it will be more challenging to lend against them, but the wind farm developers will hold their feet to the fire until they turn up at the table… and in no time at all their greatest concern will have become mainstream. And the worst case scenario is that the turbine manufacturers end up with plenty of promo shots for PR.

As for the special purpose vehicles forging ahead with offshore windfarms around the world as the sector reaches full maturity, there is a wide array of turbines available leaving developers spoilt for choice. 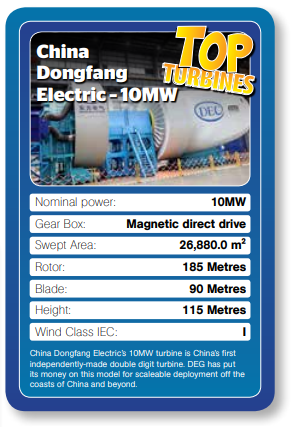 Siemens Gamesa ranks highest in the tables for having announced earlier this year the largest offshore wind turbine to be brought to market. Production is pencilled for 2024 on the 222 DD which seems a long way off, however with wind farm developments being extensive it will not be long before developers come knocking.

Siemens Gamesa is seeking to have a Danish test site up and running for this model by 2021.

Markus Tacke – chief executive of Siemens Gamesa Renewable Energy – says of this new model: “We’ve gone bigger for the better... The new SG 14-222 DD is a global product which allows all of us take giant steps towards protecting and preserving our planet.

“We ourselves became carbon neutral in late 2019 and are on track towards meeting our long-term ambition of net-zero CO2 emissions by 2050. Our installed fleet of over 100GW both offshore and onshore abates more than 260 million tons of CO2 emissions annually.”

General Electric announced the launch of its GE Haliade-X turbine in 2018 and installed its first test unit in Rotterdam the following year. The team working to obtain its Type Certificate and this should be completed in 2020. 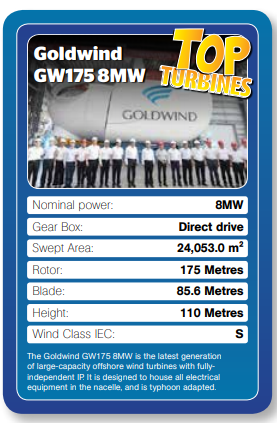 Ørsted has already signed with GE to use the turbine on two US windfarms – the 120MW Skipjack in Maryland and the 1.1GW Ocean Wind in New Jersey – that will be commissioned in 2022 and 2024, respectively.

At the launch of this model, John Lavelle – chief executive of offshore wind at GE Renewable Energy – said: “This is a very important milestone for us as it confirms the robustness of our Haliade-X 12MW design, and gives certainty to our current and future customers who believe in the attributes of our platform.

“When we introduced the Haliade-X 12MW we established a new paradigm in the industry, and we will continue to do so by innovating, improving, and introducing new features to our Haliade-X platform, making offshore wind a more affordable and competitive source of renewable energy.”

For MHI Vestas, the popular V164-9.5MW has been regularly upgraded. It was originally called the V164-7.0MW when first launched in 2014, the output was then increased to 8MW and later to 9MW. With an upgrade to a 10MW unit also currently available, it was the first wind turbine to achieve double digit power. 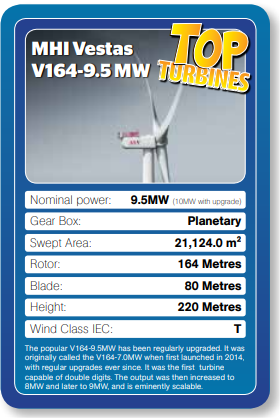 MHI Vestas chief technology officer Torben Hvid Larsen said: “At MHI Vestas, we are focused not on what others are doing but being the best at what we do. The V164 – 10MW turbine in the best proof point yet that we do not accept limitations of conventional thinking and that we think beyond ourselves. We have embraced the challenge of transforming what is possible in our field”.

MHI Vestas has signed a deal with SSE for its 1.1GW Seagreen wind farm and also with Engie and EDPR for its 30MW floating wind farm. The update was achieved through a small design change to enhance airflow and increase cooling in the converter.

Looking towards China, and the army of wind turbines that is appearing along the coast line, it is on track to become a large market for turbine manufacturers. However, Chinese specialists have been working to develop some of the largest turbines on the market.

Over the course of the last three to four years, a time of rampant M&A movement on greenfield projects in European seas, Chinese companies have been aggressively outbidding European rivals to own stakes in big projects to learn the technology to bring it back to China.

The process started in 2016 when State Development and Investment Corp (SDIC) bought Repsol out of its stakes in the Beatrice and Inchcape offshore wind farms in the UK.

China Three Gorgers quickly followed suit and in the same year bought an 80% stake in Germany’s  288MW Meerwind offshore wind farm for €1.7 billion. The following year after a call from the Beijing government to go global on offshore wind, China Resources National bought a 30% stake in the Dudgeon wind farm in Scotland for £803 million pounds.

China Three Gorges then went on to buy a 10% stake in the 950MW Moray East Wind Farm (Scotland) paying £35 million for a minority stake in 2018… and this is when blockades on Chinese investments into European wind started.

At around this time, China to evolve its own offshore wind market. Designed for sites off the south-east coast, Goldwind installed its first 8MW turbine on the Xinghua Bay II offshore wind farm in April 2020. The Chinese turbine manufacturer says the Goldwind GW175 8MW is the latest generation of large-capacity offshore wind turbines with fully-independent intellectual property. It is designed to house all electrical equipment in the nacelle and is typhoon adapted. The manufacturer has also been creeping up on its competitors as it claims it will deliver turbines of more than 15GW in 2020.

China Dongfang Electric’s 10MW turbine is China’s first independently-made double digit turbine. A prototype  was installed on the same wind farm as the Goldwind GW175 8MW in July 2020 and then connected to the  grid the following month. Once the prototype passes test and verification, it will be ready to go to market with  the developer claiming it can make up to 100 units per annum. The turbine is typhoon resistant and features a  permanent magnetic direct drive system and carbon fibre blades.

Yu Peigen, general manager of Dongfang Electric Group, stated that: “The roll-off of the 10MW unit has made  the leap forward and large-scale development of the wind power industry from onshore to offshore possible, and has also laid a solid foundation for Dongfang Electric Group to become stronger, better and bigger.”

As with all renewable energy technology, R&D is forging ahead at full speed with innovations being brought out to increase output on existing models with the primary goal to reduce the number of models deployed for maximum generating capacity. As new markets open up to the potential of offshore wind and floating models become widely accepted, there is no reason to believe individual units will not be able to create a great deal more that 15MW… in time.