Investors are poised to commit heavily to digital infrastructure, according to a new worldwide investor survey and study conducted by IJGlobal and M&E Global.

A PDF of the full survey findings can be FOUND HERE...

These results are in line with Asian Infrastructure Investment Bank (AIIB) research which shows digital infrastructure needs an injection of more than $1 trillion in the near future to meet demand for 5G, data centers and digital applications such as smart cities and intelligent transportation, with 50% of that attributable to Asia. This is all the more urgent given that the United Nations estimates 4 billion people are not even connected to the internet, while only 2.5 billion are.

While governments have previously used traditional infrastructure projects to re-boot economies, twice as many respondents to the IJGlobal / M&E survey believe – in this market – that digital infrastructure is a better investment than bridges, roads, ports and even renewables.

Before Covid-19, renewable energy – including solar and wind energy generation – was for many markets the primary focus for future-oriented infrastructure investment. Now, survey respondents think that digital infrastructure will grow faster than roads, social infrastructure and renewables.

This is a particularly strong statement considering that the largest respondent group are investors in renewables.

"Investors have done an about face, favouring digital infrastructure 4:1 over renewables as a growth area," says William Cox, managing partner at M&E Global.

Digital infrastructure to impact all industries Digital infrastructure consists of an eco-system of areas, including 5G/connectivity, data centres, Internet of Things (IoT) and smart applications (e.g. smart cities). IoT devices, sensors, applications are on track to become a $2.4 trillion market worldwide by 2027.

Respondents believe that digital applications such as smart transportation, 5G connectivity and advanced data centers are likely to progress most in the immediate future. "These areas are easiest to invest in because they largely depend on a straightforward capital commitment by telcos and investors," says M&E Global´s Garver.

These findings are in line with a report by South Korean government think tank KISDI that predicts growth in 5G related applications will be 43.3% annually and that the resulting value added worldwide will be $965 billion by 2045. In a 2018 report, the World Economic Forum concluded that "5G will impact every industry – autos, health care, manufacturing and distribution and energy services, among others”.

Among the digital applications, smart transportation, logistics and cities will lead the list of preferred practical applications from digital infrastructure as the three areas are strongly intertwined.

Smart logistics helps optimize supply chain and transportation flows to get more goods between their origins and destinations more quickly and efficiently.

Meanwhile, Smart Cities have been estimated to be growing at a compounded annual growth rate (CAGR) in excess of 34% worldwide by 2025.  Smart transportation has an even larger growth rate target. Interestingly, almost a quarter of respondents (22.2%) think that a key benefit of digital infrastructure is raising the resilience of existing infrastructure. Roads and transport systems will be able to handle more traffic at a higher throughput, for example. Smart cities will become cleaner and more energy efficient.

Unlike traditional infrastructure, which temporarily creates low-level construction jobs, digital infrastructure helps create jobs with a future, which creates a need for training and supports the development of knowledge economies.

Not surprisingly, study respondents claim that governments and their policies are the biggest hurdle to developing digital infrastructure (32.4%). This is to be expected given that governments formulate policies, are regulators and (broadly) infrastructure owners. They define such important areas as taxation, asset depreciation and they award licenses, while leading decision-making on incentives and deterrents.

In April, China’s National Development and Reform Commission (NDRC) – the country’s top economic planner – defined “new infrastructure” as including information-based infra such as 5G and the Internet of Things (IoT), convergent infrastructure supported by the application of the internet, big data and AI; and innovative infrastructure that supports scientific research, technology development and product development.

How to finance a digital infrastructure investment 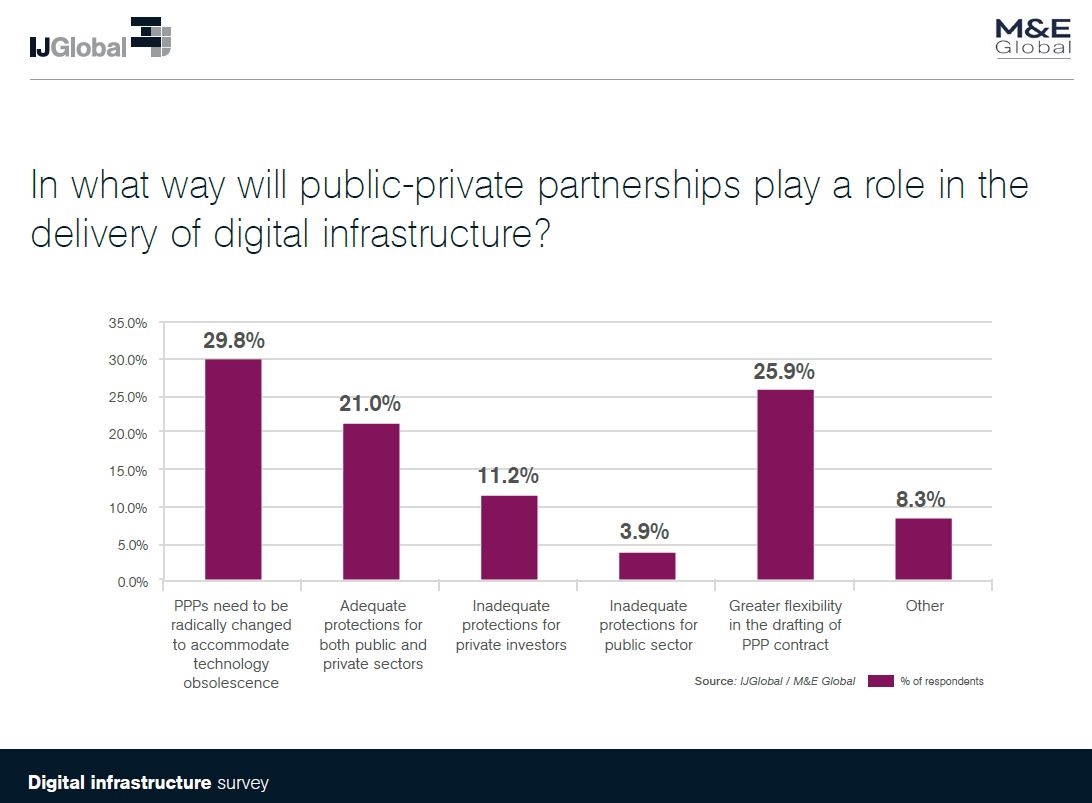 Traditional infrastructure is typically procured through traditional means of design-build contracts with many countries having espoused public-private partnerships (P3), which normally involves investors and private partners sharing financing and ownership with public institutions.  Through a PPP model, risks, returns and responsibilities are outsourced to private partners.

However, the structure of digital infrastructure is more complex and current PPP models will not serve as a template for its delivery through them – without significant levels of flexibility, which is rarely seen in such contracts.  Hence 29.8% of respondents believe that if digital infrastructure is to be procured by government through PPP, the delivery model will require a significant overhaul to accommodate technology obsolescence.

On a more mundane level – though cutting edge for most infrastructure investors – data centres and investments in 5G are deemed to be more straightforward… by comparison. Other areas, such as the Internet of Things (IoT), are less clear-cut because they permeate all industries.

Lack of qualified personnel is also a challenge for digital infrastructure. The "digital skills gap" in the field is significant, reports Matt Garver of M&E Global. A 2016 study by the European Union found that 22% of all employees across all sectors and jobs in the EU were at risk of a digital skills gap. 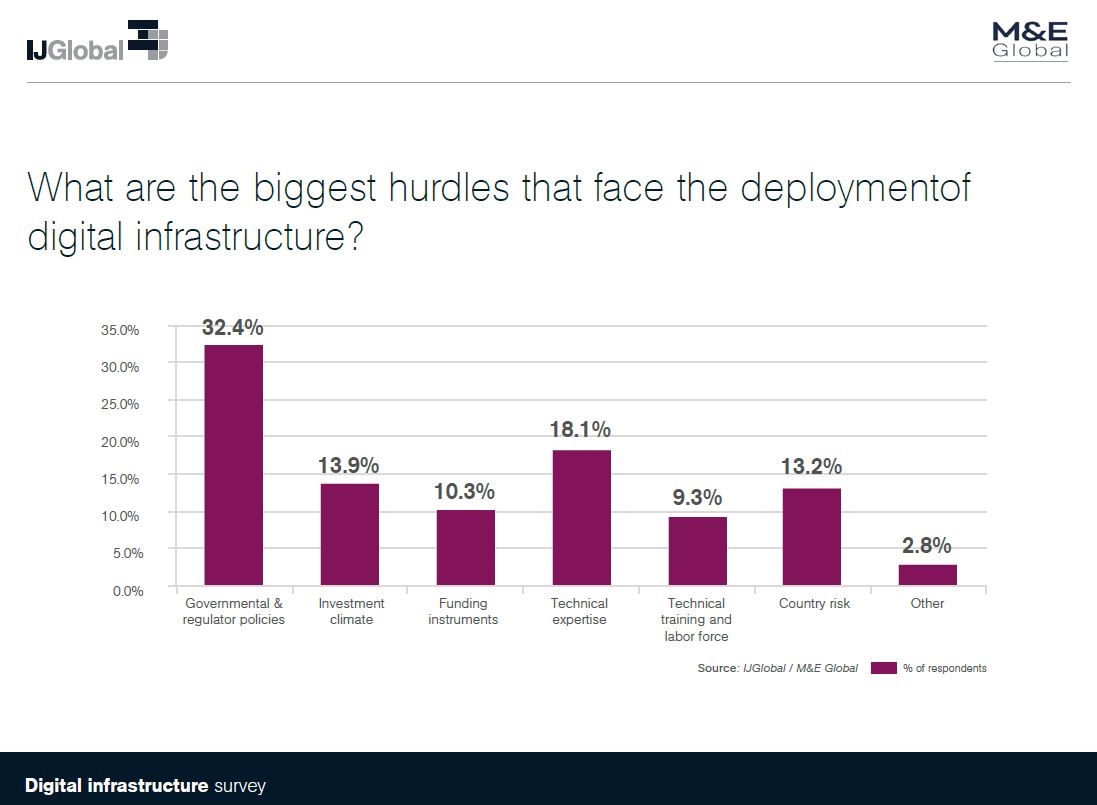 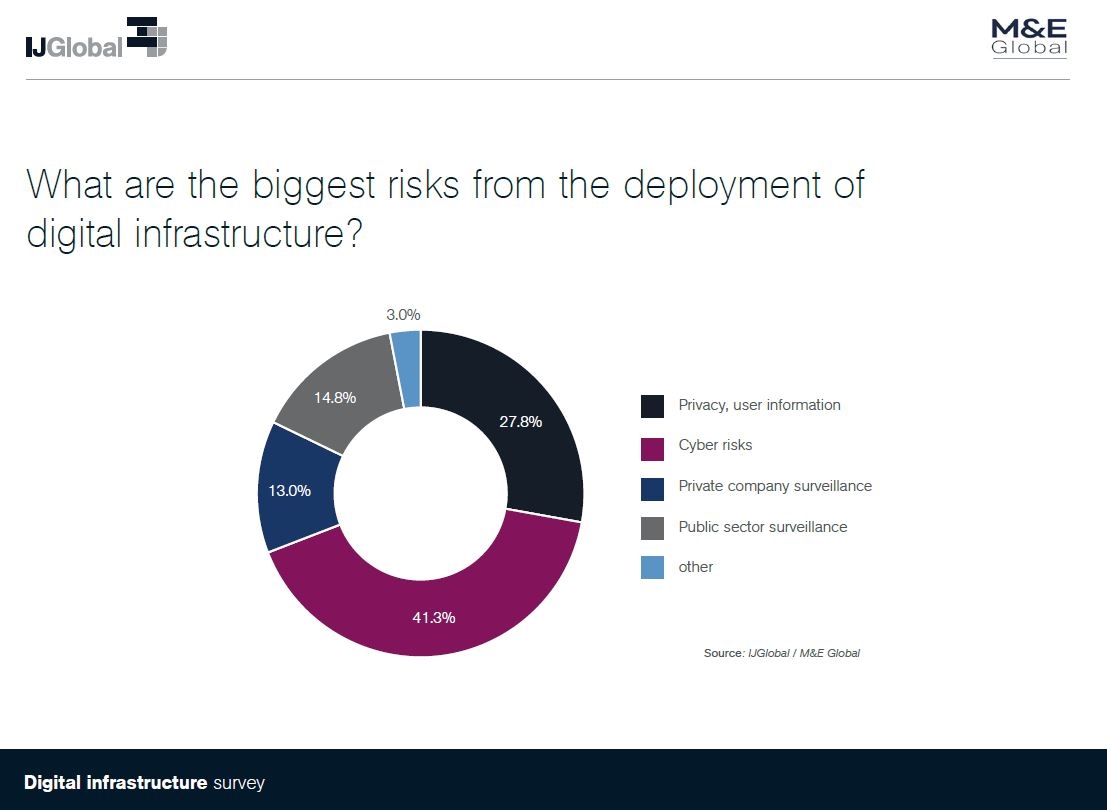 Reliance on digital infrastructure elevates cyber risk (41.3%) and the potential abuse of personal data by companies and the government.

The value at risk due to cyber attacks is currently estimated at $5.2 trillion over the coming five years (Accenture: 2019). In the Accenture study, utilities – a major infrastructure sector – and software are ranked second and third most impacted by cyber crime.

Even so, 63.6% say that the benefits of digital infrastructure outweigh the risks. Only 5.6% think that the risks overshadow the benefits. 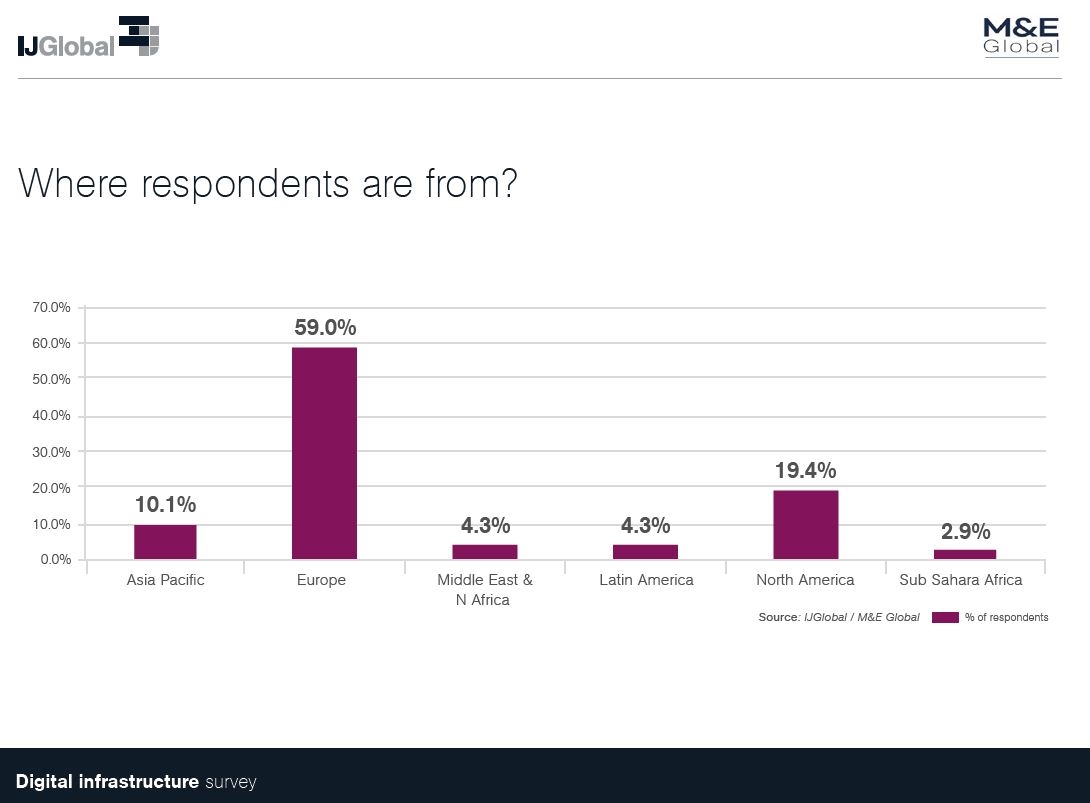 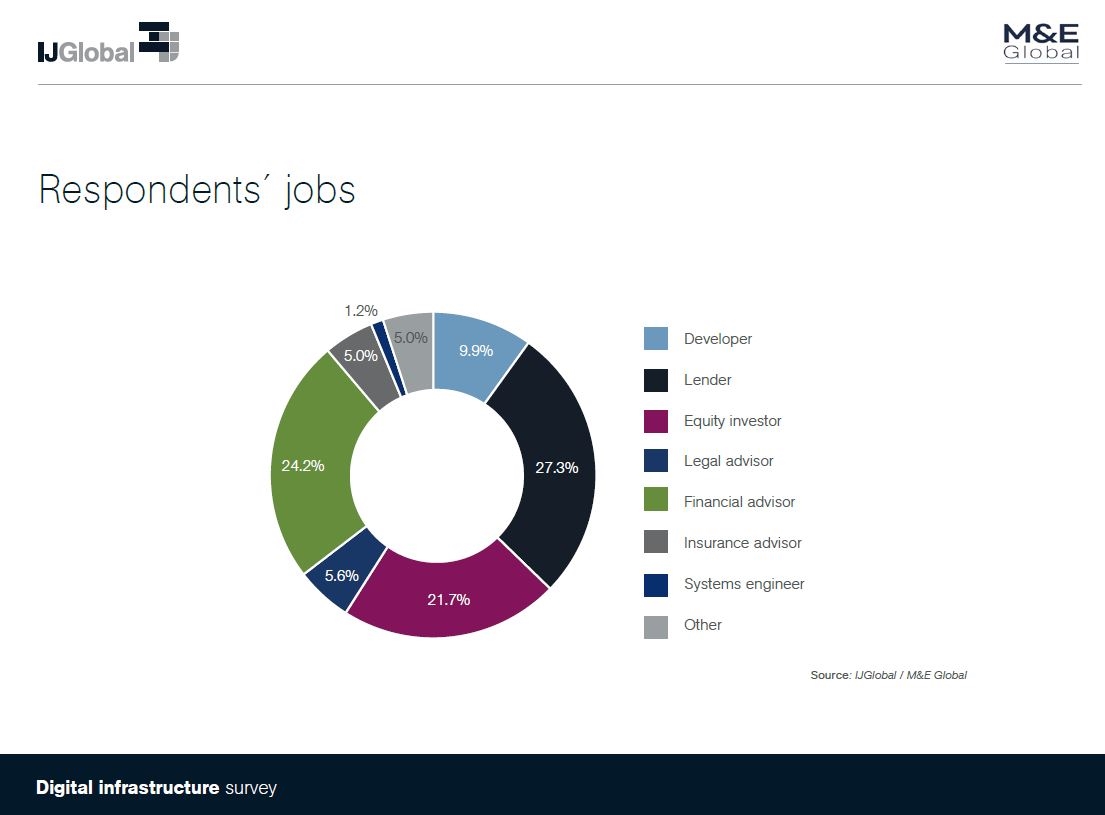 Source for all charts in this document: IJGlobal and M&E Global, 2020