Few people who know Andy Carty would ever call him “a retiring man”, but all will be saddened to learn that this month he throws in the towel from his role on the senior management team at Infrastructure UK after an impressive public-side tour of duty that took in three seats of power.

Andy is one of those rare characters in the industry who combines charm and good humour with an unflappable nature that’s essential for working in oft-frustrating public roles – without going entirely insane. For the last six years, he has lived and breathed the pungent airs of Westminster, before that having done a stretch in Belfast working at the Strategic Investment Board – in the most bugged office in the province – also having served five years as a special adviser at the EIB in Luxembourg.

Some might accuse him of being institutionalised – and not without good reason – but on 12 September (2019) he retires from the public side of the table with sanity largely intact.

It has been suggested that he retained his grip on reality by penning a couple of books on (yawn) IT services management… but that could also have been an expression of his mental state.

Of all the many meetings with Andy over the years – he’s a regular at the legendary Stephenson Harwood summer party – the one that makes this infra hack chuckle most is the memory of him (champagne flute in hand) at a law firm bash in 2008 expounding at the top of his voice that the head of its infra practice had “a funny, squeaky voice”… delivered in a falsetto that would have put the Bee Gees to shame.

As he concluded this ever-so-slightly personal assault, Andy breaks off pointing: “And he’s standing right there!” Only for said lawyer to cast around, desperately seeking somewhere else to be… making out like he hadn’t just heard himself being lampooned. In a career that has witnessed an eclectic mix of roles, one of his memorable stand-outs was in China while on a tour at the behest of the then prime minister David Cameron and chancellor George Osborne… who thought at the time China was the answer to the question… even if they weren’t sure what the question was.

His career has also not been without controversy… usually caused by his – shall we say – open and frank nature. Ask him a question and you'll assuredly receive an honest answer.

This got Andy into a spot of bother when he was quoted on the front page of the FT slamming (on record) the government’s IT procurement policy, explaining that problems stemmed from its insistence on giving the stupidest contracts to the stupidest bidders.

This resulted in a vigorous dressing down – “in the nicest possible way” – from the fearsome duo of Geoffrey Robinson MP and Sir Adrian Montague… who promptly recommended he keep up the good work!

Over the years, Andy has overcome many challenges that range from daily trials and tribulations to trying to persuade John Prescott MP that, for the public side, there’s more to project finance than a simple mortgage structure.

He failed entirely to impress on Prescott the significance of risk transfer: “We could just borrow the money ourselves, if that had been the case!”

Andy worked for many years as a consultant in the (oh lord, there it goes again… yawn) IT sector,  with Honeywell, one of the world’s largest IT companies, as well as with the UK government’s Central Computer and Telecommunication Agency, and a period running his own consultancy.

With that real-world experience, he was ideally suited to the corridors of power – even if that wisdom was sometimes ignored in favour of political interference and poor procurement practice.

Project finance has never figured significantly in the IT world… and, given experience of the few times that tech components feature heavily in PPP deals, that’s for the best. However, his skills and knowledge earned him a place in the UK government, and set him on a path towards infrastructure.

“I was working as a private sector consultant (note to sub: please check not “working as a waitress in a cocktail bar”) at the time for Michael Heseltine to sort out mega IT problems,” says Andy. “And then Adrian Montague dragged me across to work for the Treasury Taskforce in 1997. “This was around the time when New Labour came to power, and they were going to change everything,” Andy laughs. “To be fair, they did genuinely reinvigorate PFI, as they called it at the time.

“They actually did make a hell of a difference and – while you can argue that not all the structures were perfect – they did deliver a heck of a lot of infrastructure, renewing old schools and hospitals and building new infrastructure across the justice sector… certainly more than anyone else has done.

“And these were not glory projects, they delivered significant amounts of investment across the country into sensible infrastructure.”

The Treasury Taskforce evolved into Partnership UK (a PPP itself with 51% owned by the private sector) under the leadership of James Stewart, with Andy supporting him as COO. Andy’s time there was followed by three years on the peace process in Northern Ireland, followed by salad days at the EIB.

It was during his years in Luxembourg – 2008-13 – that we became better acquainted. This was a time when the EIB played a key role in keeping the European PPP sector’s head above the water.

Around this time, IJGlobal performed a volte-face in its coverage of the EIB having until then frequently lambasted it for competing with commercial lenders in a healthy lending environment that needed no support.

“The EIB has an interesting remit and I think most people would argue against you (on it having a negative impact on project delivery). I would disagree with you on points of substance, rather than detail. They need to be there in its counter-cyclical role and as a stimulus to deliver EU policy,” continues Andy. 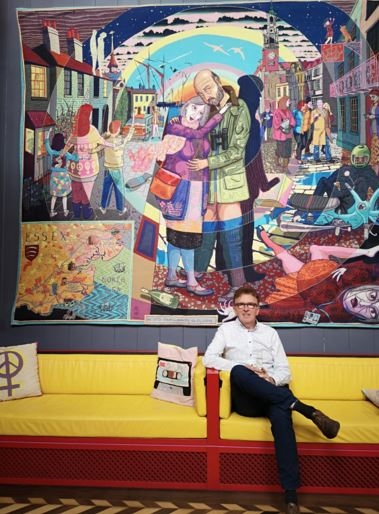 “The UK Government faces an interesting challenge, one that I don’t think it has come to terms with on what they plan to do when they have a problem like 2008/9 again – nobody has come up with a solution as to who will lend money.”

He adds: “Whether the EIB needs to be the size it is and do the amount of deals it does – that is a legitimate debate.”

Andy also points out a stealthy re-brand of the EIB logo which now proudly boasts to be “The EU Bank”. Take a look at the logo on the EIB website if that’s news to you.

“This makes it clear that the EIB is there to support the European Union’s priorities, which has for instance seen a massive increase in climate change investment,” Andy adds.

When he returned to the UK government in 2013 – working three days-a-week – he came back as a member of the senior management team, part of his role being to strengthen the links between the Centre of Government and the Devolved Administrations (Northern Ireland, Scotland and Wales).

“For any relationship to go well you have to work at it and I think having someone at the centre responsible for that relationship must help,” he says. Retirement beckons for Andy in the wilds of Norfolk, and it looks like he’s going to do what all sensible people (curiously few lawyers) do… and actually enjoy life – instead of taking on one of the offers he is being made.

“Why do people stay working when they can stop? I don’t understand it,” says Andy. “I have been working since I was 14 and retirement sounds quite attractive. The idea of doing more of the things you enjoy sounds like a pretty good idea to me.”

Andy, we shall miss you. And... Norwich isn’t too far to visit.