In June 2019, South Korea’s Ministry of Trade, Industry and Energy approved the draft Energy Basic Plan, announced back in April. As expected, to satisfy growing power demand the fourth largest economy in Asia followed the likes of Thailand in turning its gaze towards natural gas and renewable energy.

Under previous plans South Korea was targeting 20% of power generation from renewables by 2030, an increase from the current level of 8-9%, while also promoting gas and decreasing the roles of nuclear and coal.

Now, the fourth largest coal importer in the world is aiming to reach 30-35% renewables by 2040, while committing to even deeper cuts to coal and nuclear dependence. Restrictions include prohibiting license renewal for nuclear plants, phasing out coal-fired sooner and cancelling construction of plants for both.

Gas will also be pivotal in reducing coal dependence, with the government planning on cutting the tax for gas import by 75%, while raising the same for coal by 28%.

South Korea’s Ministry of Trade, Industry and Energy aims to install almost 130GW of renewable energy by 2040, compared to current capacity of around 11.3GW. An additional 155GW-235GW of wind and solar could be added on rooftops and low-quality agricultural land. This could potentially raise renewable capacity in South Korea closer to 400GW.

However low solar radiation and limited space for development present challenges in South Korea. Only seven wind projects, totaling 115MW have come online over the past several years.

Given insufficient available land for onshore development, it is no wonder attention has moved offshore.

There are now more than 15GW of offshore wind power projects in the development pipeline, though only a couple of small-scale projects have reached operations to date. 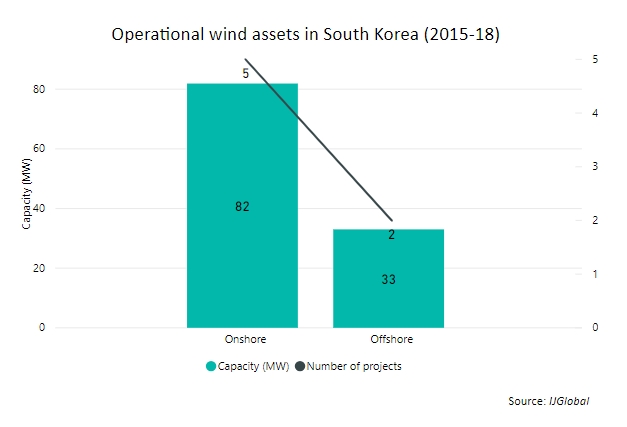 In 2018 Seoul-based turbine manufacturer Doosan Group commissioned the 8MW “WinDS8000” model, designed for offshore wind farms, which opens up the possibility for larger-scale projects in the coming years.

Previously, Doosan worked on the Tamra wind project, and it has been developing two more offshore plants in the Yellow Sea, including the 1GW Gunsan project. 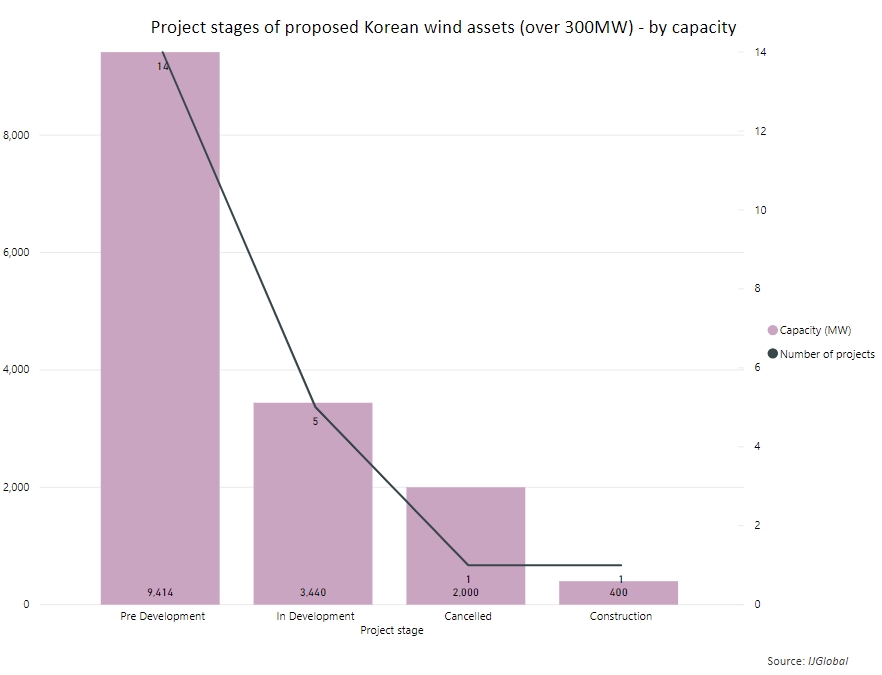 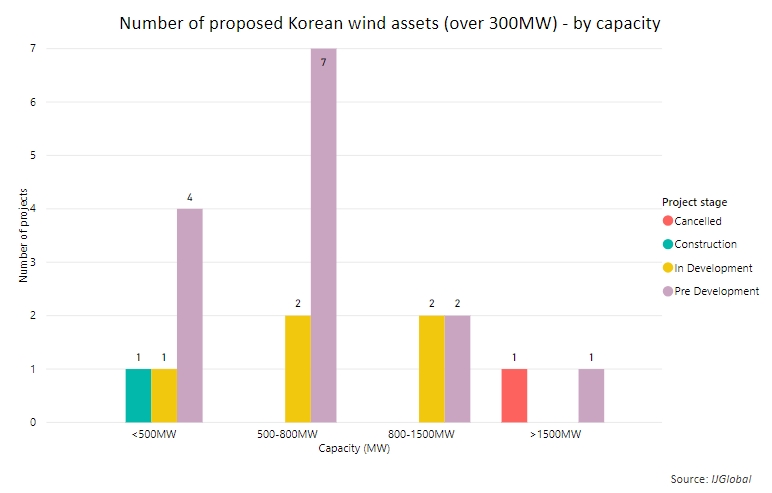 As IJGlobal’s data shows, public-owned companies like Kepco and Posco, as well as city governments of Gunsan and Incheon are among projects’ shareholders. There are also private domestic investors among the project developers, such as Halla Engineering, Hyundai Heavy Industries, Jeonnam Development, etc.

The large proposed projects in the pipeline, the financial clout coming from both state-owned and foreign investors and South Korea potential for higher capacity home-grown technology in the offshore wind sector are setting a promising stage for the country’s ambitious new renewable energy target.

Packed with key stats and insights from industry leaders, this report contains: