European Investment Bank has signed a $25 million loan with Cape Verde's telecoms company to connect the island country to the $173 million EllaLink subsea cable in order to meet its population’s growing demand for  internet and mobile services.

This financing is part of EIB’s long-term support to the African telecom sector, and particularly Cape Verde. The EllaLink connection should improve internet access and enable the implementation of 4G on the island.

The multilateral pledges further support to the sector and builds on the €15 million loan for a 4,850km fibre optic network across Kenya, Rwanda, Uganda, Zambia and the Democratic Republic of Congo signed last December (2018) and a €35 million loan to Telkom Kenya’s 3G and 4G network expansion.

According to IJGlobal data, since 2010 private lending has been almost 4x government support. This is in contrast to the situation in the renewables sector, where DFIs are very active in trying to help countries reach their renewable energy targets and making sure the projects get the necessary government support.

The major private lenders are banks from Europe and Africa, in particular Nigeria and South Africa. Local lending for the sector accounts for almost $6.5 billion, leaving North American and Chinese private lenders far behind. On the other hand, Chinese public institutions have contributed more than $530 million since 2010, which reflects the general trend of active Chinese state support for projects in Africa in recent years. 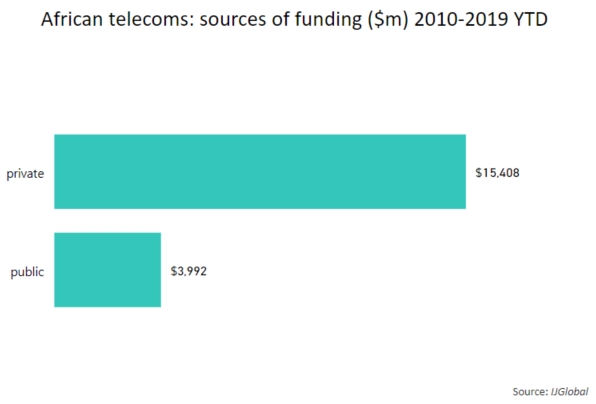 According to IJGlobal data, Nigerian institutions are leading private lending for telecom companies and projects on the continent. The largest deals since 2010 have been in Nigeria: the $10.7 billion acquisition of Zain Africa by India’s biggest mobile services company Bharti Airtel, MTN’s network upgrade - one of Nigeria’s largest telecoms companies, and IHS Holding’s acquisition of 2,136 telecom towers.

The value of deals in the Nigerian telecom sector represents 79% of the total transaction value for the sector in Africa. The 2000 Nigerian Communications Act (NCA) and the National Telecommunications Policy (NTP) liberalized the sector and allowed private companies and market competition to take over telecoms development. These reforms should be regarded as a major enabler for the Nigerian market. 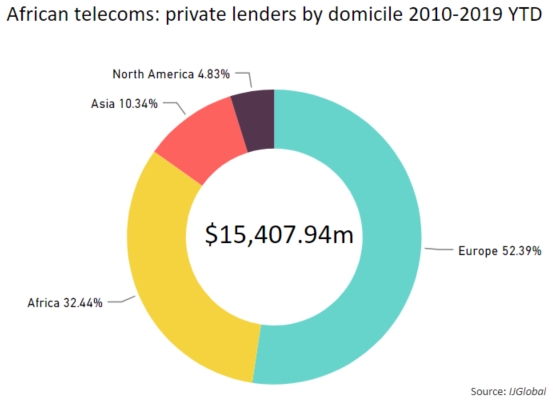 Data compiled by IJGlobal show the bulk of Nigerian projects tend to get financing from local lenders, while the biggest deals, such as the acquisition of Zain, also attract international banks. Telecoms account for roughly 8.3% of the country’s GDP, which further shows the sector’s importance and requirement for investment.

Cape Verde’s telecoms sector is of course much smaller, requirement much less investment. But it is clear that projects such as the Cape Verde EllaLink Link-Up work to cement the European Union’s commitment to Trans-African projects for sustainable development and improved living conditions on the continent.

Cape Verde, among other African countries, could also take advantage of Chinese support. The China-Portuguese Speaking Countries Cooperation and Development Fund was established in 2013, which targets investments in various economic sectors in these countries of shared cultural and historic heritage.