In the first of a series of focuses on figures in the global infrastructure industry, IJGlobal turns the spotlight on a prominent project finance banker – Andy Robinson – who rose to fame at NordLB, building out an impressive global offering and surrounding himself with an eclectic crew of deal makers...

For those who know Andy Robinson, it feels like yesterday that he kicked the dust of project finance banking from his heels, heading off for a life of retirement in the rural splendour of Hertfordshire.

In truth, it was a sad day for the NordLB team as they watched their global head of structured finance (origination) take a final bow from what had been a glorious career in infrastructure lending.

Few people in infrastructure community leave a legacy that compares to Andy and he is widely lauded for having built an impressive team spanning the globe. The turn-out for his retirement party served as testament to the regard in which he is held, overflowing the NordLB haunt of Harry’s Bar – pulling in friends and team members from as far afield as Singapore.

Harry’s Bar on Ironmonger's Lane is the spiritual stomping ground for NordLB London staffers of a certain vintage resting on the site of the bank’s first branch in The City, the launch pad for many tales of derring-do from the early years. 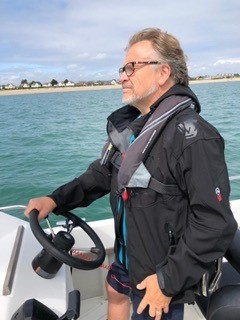 While it feels like yesterday that Andy hung up his spurs in favour of a life of artistic endeavours (he wields a mean paint brush); culinary expertise (quite the Nigella at home); and, more recently, power boating… it was actually back in 2018 – at the end of May – that Andy served his final day at NordLB.

However, Andy didn’t land on the planet heading up the Nord team – it was a long journey to the top that started with Williams & Glyn and then Royal Bank of Scotland. He joined Nord’s London team when it was in ramp-up mode and rose to MD level in 2011.

He surrounded himself with an eclectic team of bankers and (speaking as a one-time infra head hunter) was renowned for holding on to a quality team at a bank that – to be fair – is not renowned for mega pay checks and bonuses.

Talk to anyone in the industry and they will tell you – free for the asking – that the Nord team stands out as one of the friendliest on the street, working in a positive culture that Andy promoted long before the terms “work-life balance” and “millennial” were bandied around.

In this piece, we celebrate a career that took Andy to every corner of the globe, lending to infrastructure projects and building teams.

Over a career that spanned 33 years at the German bank alone, Andy abounds with tales of transactions closed and challenges overcome… but as we bask in the London humidity of August and the silly season bears down, it’s the bizarre that sparks interest.

Speaking this week with Andy, perhaps the most curious event was when he was approached to finance a project of an extra-terrestrial nature. He received an ill-written letter – that in more enlightened times would have one thinking of unclaimed bequests from an unfortunate cousin who had died in an airplane crash – inviting him to fund a UFO project.

Not exactly run-of-the-mill for an infrastructure banker, the epistle called on Andy to support his endeavours to the tune of $100 million to finance the construction of a “flying machine” that was in early-stage development and would “look just like a cloud”.

The letter – which concluded with the pay-off line “I got to need USD100m” – called on Andy to pony up the cash to progress this craft to the next stage where “it look just like a cloud”, rendering it “100% invisible”.

As Andy says: “While I always enjoyed testing our credit colleagues – we passed on this once-in-a-lifetime opportunity.”

But banking was not always quite so space-age. Andy cut his teeth at Williams & Glyn (now part of RBS) handling international payments – back when telex was the hot new thing in technology.

It was in those early years that he was to learn that stupidity is timeless and that “experienced” bankers often fell into the trap of not keeping up with tech developments – a mistake Andy vowed never to make.

These two beliefs that it was essential to stay on top of tech… and that people are (largely) idiots, were underpinned by a branch manager who had entirely failed to get to grips with the latest developments. 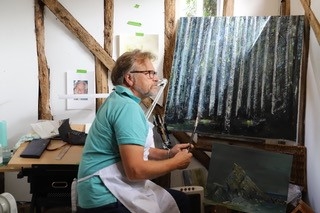 With the air of authority that is most oft mustered by those who least have the capacity to deploy it, he airily advised Andy to use a paper clip to attach hard cash to a telex to deliver it to the customer… a level of genius that hopefully is not so frequently seen in infrastructure banking.

As the years rolled by – as they do for all of us – “opportunities” cropped up on the career front, but fortunately for Andy he was to reject these offers as he would have repeatedly come a cropper had he taken them.

Most of them emerged after he had settled into NordLB and was building the team – a role that he describes as “one of the most satisfying aspects of my professional career”.

And it’s a good job he was so invested in Nord as every position he was approached for at that time when he was ripe for head hunters would have seen him jump ships for a sinking vessel that was to go belly up within two years of an offer being made.

Among these “nuggets”, however, there was a jewel.

He was invited to take on the role of head of capital markets at “one of the country’s largest building societies” a door that had opened thanks to doing a lot of business with this organisation at the time.

However, Andy declined… and for very good reasons: “It would have been an interesting challenge, but one that both the organisation and I should be grateful for avoiding… as I had absolutely no relevant experience or skillsets.”

After reflection, he adds: “The money would have been interesting though.”

When it comes to regrets on the work and private front, Andy has a few – but then again too few to… you get it.

However, chief among these is his biggest regret of turning down the role of Rocky in a semi-professional production of the Rocky Horror Picture Show.

Ripped as he was from a summer of working on a building site, he shied away from the stage on this occasion, not even to be lured in by the offer of his own team of “oil applicators” (Note From Ed: the folly of youth).

However, he rests of his laurels of having been a child prodigy having starred as nipper in the 1960s in a Vosene Shampoo advert – his one professional TV appearance… that we were entirely unable to find on YouTube.

For now, Andy has been training for his power boat licence, working on his brush strokes, cooking up a storm… and let’s face it – Hertfordshire’s a nice part of the world at this time of the year.