Thailand's National Energy Policy Council (NEPC) approved in January (2019) the country's highly anticipated update to its power development plan (PDP) to 2037, following months of back and forth with critics.

The plan’s headline goal is to diversify its largely coal-and-import-dependent energy sector. The PDP aims not only to increase the nation’s installed capacity by almost 70% to 77.2GW compared to 2017 but also to attract foreign investments in domestic generation, decreasing the share of the incumbent Electricity Generating Authority of Thailand (EgaT).

New solar projects, especially floating ones, have been announced as the glossy highlight of the development plan which will still rely mainly on gas-fired assets.

The new PDP foresees an energy mix mainly divided between natural gas (53%) and hydro and renewables (35% combined), leaving coal at the margin (12%). The rationale for betting on gas is clearly the withdrawal of major multilateral institutions and international lenders from new coal-fired projects. 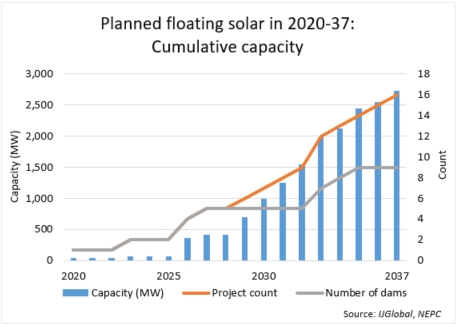 IJGlobal data shows that gas-fired plants have been a major source of energy for Thailand While new operational solar PV projects outnumber gas-fired ones, gas prevails in terms of capacity, with coal clearly not present.

Coal has been on a downward slope in Thailand for the past few years, as IJGlobal data indicates that no new coal-fired plants have become operational since 2012. Several large coal plant projects in the southern part of the country have been delayed, such as the 800MW Krabi and 2.2GW Thepha coal-fired plants. These two have not been included in the new plan, instead being replaced by gas-fired capacities. Another coal megaproject – the 3.2GW Thap Sakae – was cancelled due to protests.

For Thailand, running floating solar flagship projects under its renewables umbrella alongside gas and hydro as the main interests might be the winning formula for attracting foreign investment and contractors. The anticipated 2020 commissioning of the floating solar project at Sirindhorn Dam – the world’s largest hydro floating solar farm when it comes online – will test that investment thesis of accelerating Thailand’s embrace of renewables.

The Thai government has announced the development of floating solar plants, alongside ground-mounted and rooftop projects to fill the gaps in its power generation capacity. The country has outlined plans for more than 2.7GW floating solar projects to be tendered via competitive bidding taking into account the electricity price per unit. The target commercial dates of operations (COD) stretch to 2037.

This capacity will be spread across 16 projects located in nine dams:

While environmental impact assessments have yet to be carried out, IJGlobal data highlights four phases of the cumulative capacity of floating solar PV based on year-on-year growth:

The plan has noticeable year-on-year increases to the cumulative capacity in the following years: 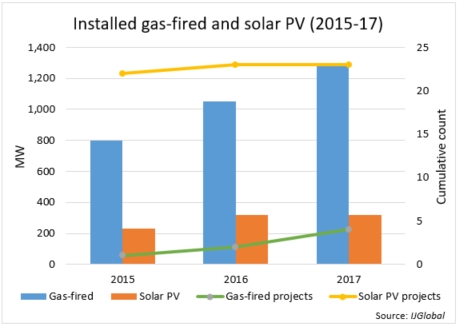 The fact that more than one project can be fit into a single dam guaranteeing power production at times when hydro power plants are unable to operate are advantages considered by NEPC. Thailand would most likely rely on the experience of other Asian countries such as Vietnam.

In late 2018 the Asian Development Bank confirmed its support for the 47.5MW Da Mi floating solar project to be on the man-made reservoir of its existing 175MW hydro power plant of the same name.

The technology has gained some governmental support in Western Europe, namely in the Netherlands and Lithuania, but is still overshadowed by other renewables. In 2017 the 6.3MW Queen Elizabeth II Reservoir Floating Solar PV Plant became operational with the aim to support the work of a Thames Water treatment facility in Surrey, England.

For Thailand however, running floating solar flagship projects alongside gas and hydro as main interests, might be the winning formula for attracting foreign investment and contractors.