Kuwait recently announced the restructuring of its Kuwait Authority for Partnership Projects (KAPP), which has failed to deliver on a long list of proposed PPPs in the country. Only one project has reached financial close in Kuwait using the PPP model – the 1,500MW Az Zour North gas-fired power plant, - and that project was actually procured under KAPP's predecessor agency Partnerships Technical Bureau (PTB).

The government’s recent changes in the PPP law aim to remove administrative barriers that have delayed planned projects. Ever since PTB was launched in 2008 the government's PPP plans have been, and remain, extensive.

The Kuwait government aims to add another 4.5GW of power capacity via the PPP model by procuring the previously cancelled Al Khairan and Az Zour North 2 IWPPs.

With the PPP programme stalled, the government is pushing forward other infrastructure plans that dwarf the pipeline KAPP has been responsible for. 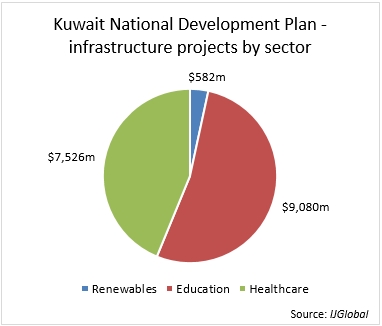 As IJGlobal data illustrates, the lion’s share of government spending is focused on improving the university facilities and the public healthcare system capacity and service quality. These projects, which are being publicly funded, include expansions of operating facilities and the development of new ones. The government plans to complete all healthcare facility projects by 2023. 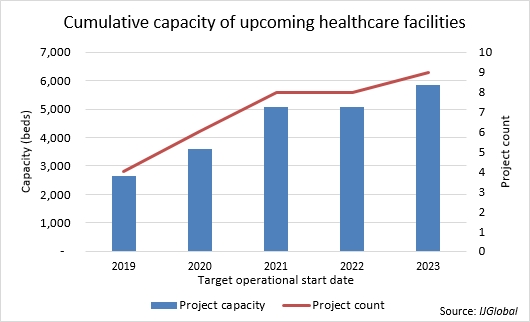 The biggest healthcare projects in terms of value are the Al-Sabah Hospital Expansion and the Kuwait Children’s Hospital. As IJGlobal data suggests, the five biggest hospital expansions will lead to a capacity increase of more than 4,000 beds.

The majority of these non-PPP infrastructure projects under the New Kuwait programme are under construction and expected to reach operational stage within five years.

The biggest upcoming project not yet in construction is the Al Shegaya energy complex, which is being commissioned by The Kuwait Petroleum Corporation. Its three phases are expected to generate up to 2,700MW from renewable sources, such as PV solar, CSP and wind, by 2022. 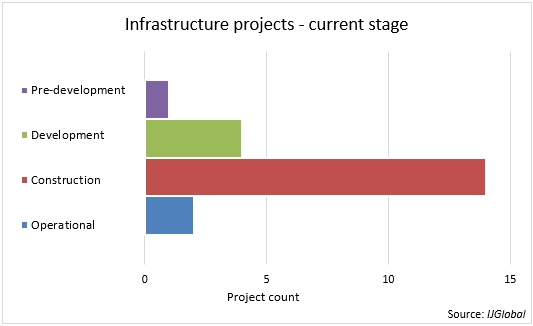 Kuwait's failure to procure PPPs has never been due to a lack of ambition, and many of the projects in its PPP pipeline are essential to its wider economic goal of diversifying beyond a dependence on oil revenues. Instead an inability to streamline procurement and approval processes, and ultimately make projects bankable, have held back its infrastructure programme.

Private developers and lenders will hope the latest reinvention of KAPP will start to address those issues.