Global Infrastructure Partners (GIP) confirmed in January (2019) that it was launching an India-focused infrastructure fund. It is the latest investor to target the country, which has significant and growing infrastructure development plans.

With its GDP rising at a rate of over 6%, India is recognising the importance and need of global investments in regards to its infrastructure development to sustain its rapid growth. National Institution for Transforming India (NITI Aayog) chef executive Amitabh Kant estimates that the country would need around $4.5 trillion for its infrastructure by 2040.

An improving environment for investors is aiding this effort. The World Bank ranks India’s climate for doing business 71st worldwide, a rise of 30 places in the space of a year, and 18th in the Asia Pacific region.

IJInvestor data shows that international funds and institutional investors are already active in the market. There are 36 active funds focusing solely on India with a target of investing over $90 billion of capital.

In regards to investment funds, the country heavily relies on inter-governmental cooperation, alongside private capital. The UAE-India Infrastructure Investment Fund is a $75 billion partnership between the UAE's sovereign wealth fund and India's National Investment and Infrastructure Fund. Launched in 2015, it is investing over a 10-year period in a range of Indian assets, including:

India is now working with Russia, the UK, Japan and other major developed countries on similar investment vehicles.

IJInvestor data reveals that almost all infrastructure funds active in India are domiciled locally, while a significant portion of fund managers and investors are coming from MENA, Asia, Europe and North America. 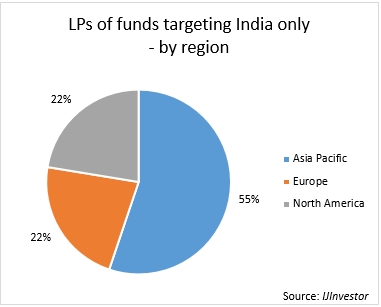 These infrastructure funds are targeting a range of sectors. IJGlobal data shows that India has in recent years seen the close of significant investments in transport and oil and gas, with the volume of renewable energy investments comparatively small. This could change, however, with the country hosting the largest renewable energy auction market in the world.

Among recent renewables tenders launched in India, SECI is awarding 3GW of generation linked to manufacturing assets and another 1.2GW of wind capacity, Indian Railways is seeking 4GW of solar, and Tamil Nadu is reintroducing a feed-in tariff as its seeks to meet a target of 9GW of solar by 2023. 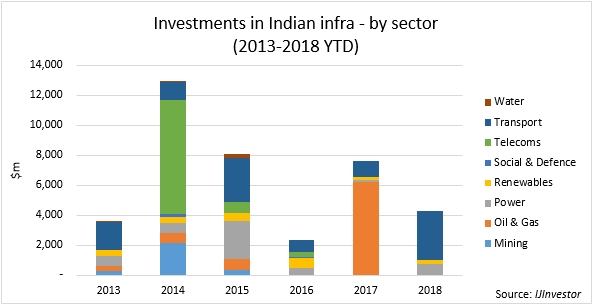 Meanwhile, London-headquartered Actis is looking to grow its presence in the country by creating a new company to house its operational renewable energy assets in India. While the new company will focus on renewables, it may also hold roads and transmission assets.

Other renewables portfolios are being pooled with the intention of attracting investors. For example, PTC India is looking to offload its wind farm portfolio which has 290MW of projects worth around $300 million.

And in possibly the most eye-catching recent transaction, Canadian pensions manager CDPQ bought a 40% stake in power generation company CLP India in September 2018. Its portfolio is a mix of renewable and convention power assets with a total generating capacity of 2.95GW.