Indonesia's National Development Planning Agency (Bappenas) recently announced that it has committed Rp55.6 trillion ($3.4 billion) in state funds for infrastructure investment in 2019. The budget covers PPPs and other projects in the power and transport sectors.

According to the country's Ministry of Transportation, the total investment required for the transport sector alone is $190 billion – half of which is needed for roads. The funding needed is estimated at $20-37 billion per year.

Indonesia has to find significant private capital to plug the gap between budgeted state funds and required investment, as government funding is expected to cover just 30% of the total capital expenditure of planned projects.

And so Bappenas in May (2018) announced its ambition to facilitate the investment of Rp14.5 trillion in PPPs next year (2019) via its non-governmental budget equity financing (PINA) scheme, in an attempt to attract more private capital into Indonesian infrastructure by offering pre-structured projects to financial investors.

IJGlobal data shows that the transport sector holds the highest number of investment opportunities with 31 prospective PPPs in the pipeline. 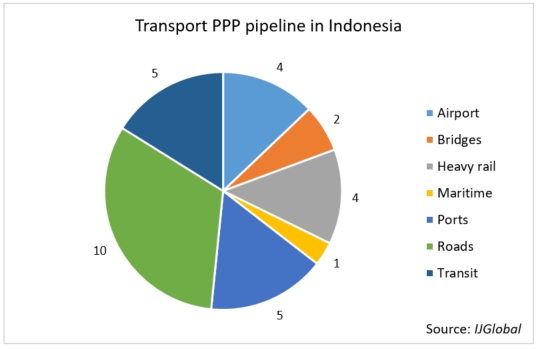 See the end of the article for a full list of the projects.

PPP schemes are the core of the Masterplan for Acceleration and Expansion of Indonesia's Economic Development (MP3EI), a programme created under the previous administration of President Susilo Bambang Yudhoyono (2004-2014). It seeks a high degree of cooperation between the central government, local governments, state-owned enterprises and the private sector.

The Government of Indonesia has refined PPP policies and its regulatory framework in order to improve the attractiveness of projects. It has attempted to make guidelines clearer – for example, on the treatment of unsolicited proposals – the availability payment model was introduced, and clarifications were made on government support and/or guarantees for PPPs.

The government also set up a guarantee mechanism to fix the rate of return for investors. It created Sarana Multi Infrastruktur (SMI) to help channel private funds into ready-to-build projects, and established Penjaminan Infrastruktur Indonesia (Persero) to provide guarantees for investors.

IJGlobal data shows 21 transport PPP projects awarded but not yet at financial close. They comprise:

The total value of these projects is $18.5 billion. 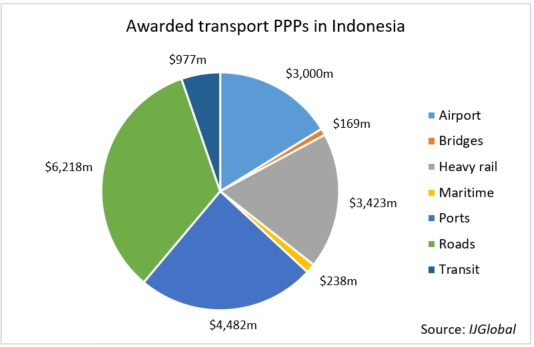 Although the number of projects now working towards financial close gives reason for optimism, the government’s drive to increase PPP financings has yet to pay off. Over the last two years, the number of PPPs financed per year has declined, though the financing of the Jakarta-Bandung high speed railway (HSR) earlier this year (2018) gave a big boost to the total value of investment.

Jakarta-Bandung HSR is being developed by China Railway and is largely funded by loans from China Development Bank. It accounts for almost half the total value of transport projects to reach financial close since 2015 (11 projects worth $13.4 billion). 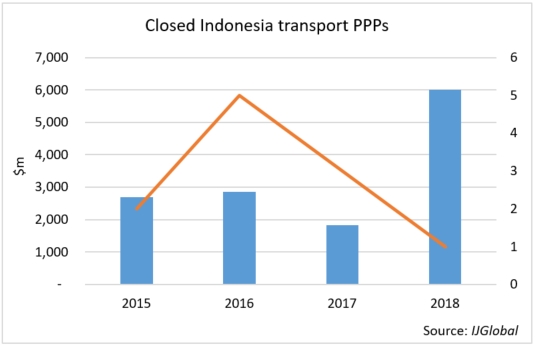 Indonesia has a poor track record for the efficient conclusion of transactions in the energy sector, with some power projects taking years to reach financial close. It is clear it is trying hard not to transfer that bad habit into the PPP space.

The country has been seeking the assistance of multilaterals to meet its infrastructure goals. Evelina Pietruschka, the Secretary General of the ASEAN Insurance Council (AIC), told IJGlobal in an interview in January (2018) that AIC is studying potential PPPs in Indonesia. AIC is looking at a local currency blended finance model with guarantees from multilateral banks.

The Government of Indonesia in November 2017 signed a memorandum of understanding with the Asian Development Bank to collaborate in promoting transport PPPs. And in March 2018, Indonesian President Joko Widodo revealed that he was looking to deepen ties with another multilateral, the Asian Infrastructure Investment Bank (AIIB).

Indonesia has been working hard on reforms and its pipeline. Now it just needs to close some more deals.