Bangladesh has the potential for significant economic growth but still suffers from huge unmet power demand.

A report published last year (2017) by PwC placed the country in the top three fastest growing economies – with the potential to double its GDP by 2030. But 75% of the country’s population lives in rural areas and while 90% of those living in an urban setting have access to electricity the figure stands at mere 42% for the rest, which is a major block to economic and industrial growth.

The country is trying to address this power deficit by investing in both renewables and conventional power sources. To achieve its goals, Bangladesh will need significant support from international companies and foreign direct investment.

The lack of access to energy is widely stated as the largest factor hampering the country’s economic and industrial development. The current energy mix provides over 60% of all energy through gas. The government has taken up several initiatives to diversify the energy mix and connect 98% of households to the grid by 2021. 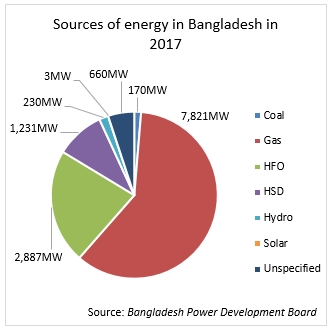 On the one hand, the country is following the worldwide shift and moving to introduce more renewables as an energy source. It has already been recognised as a global leader in solar home systems with over 4 million rooftop installations in rural households.

The country, however, lacks utility scale solar power. According to the Bangladesh Power Development Board, as of April (2018), it stands at only 3MW of total capacity.

But the situation looks likely to change. IJGlobal has identified three major solar projects in development: the 200MW Sundarganj solar PV plant, located in the Gaibandha district in the north of the country; the 200MW Cox's Bazar solar park on the southernmost tip of Bangladesh; and the 10MW Tetulia solar farm, located in the northern province of Panchagarh. 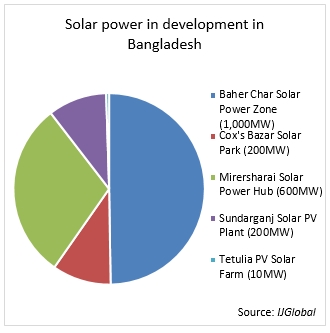 Additionally, the Bangladesh Economic Zone Authority is in the process of planning two large solar zones – in Baher Char area in Chandpur and in Chittagong, producing respectively 1GW and 600MW of power. PowerChina has expressed interest in taking up 75% of the equity requirements for the programme.

The Bangladesh government has set a target of having 3,168MW of renewable energy capacity installed by 2021. It is also aiming for renewables to have a 10% share of total generation by 2021. As of March (2018), the figure stands at 240MW or 2%, according to the government.

Alongside this renewables push is an even greater investment in coal-fired generation. The government has put coal-fired power at the centre of its 2030 strategy, targeting 50% of all power production to be generated by the technology by that year compared to less than 1.3% today. Given that much of the country is either at sea level or only just above, Bangladesh’s focus on a technology which many scientists see as a major contributor to climate change may seem surprising. But any ecological impact is being weighed against the economic benefits of quickly expanding access to power.

Looking ahead, demand for power in Bangladesh is expected to reach 34GW by 2030, according to the government, more than double the current generation capacity of nearly 14GW. The country is relying on imports for around 15% of its energy needs, showing the importance of international cooperation.

Foreign parties are not only playing an important part in the import of energy, but also in supplying elements for and developing new generation facilities.

IJGlobal data shows that 63% of Bangladeshi energy-generating facilities have foreign involvement in their ownership structure. 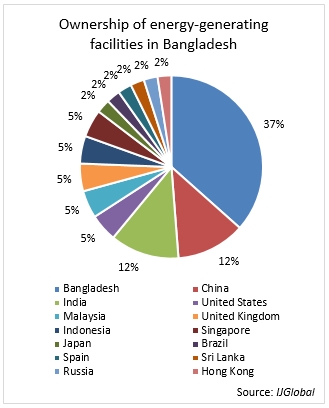 US-origin power turbines are used in 80% of the country’s gas-fired facilities and over 55% of the domestic natural gas supply is also produced by US companies, according to the International Trade Administration. 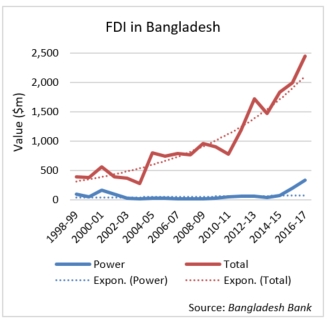 Top net investors include Singapore (28.6% of all FDI in 2017), the UK (12.8%) and USA (8.5%), according to Bangladesh Bank figures. The portion of reinvested earnings has also grown, demonstrating confidence in the country’s future.