Lebanon has unveiled plans for a $22 billion Infrastructure Investment Programme (IIP) to be implemented over the coming 12 years, with $6 billion of that designated as PPPs. The programme opens up opportunities for private investors to tap a market desperately in need of key infrastructure – but which has had little PPP success in the past.

Infrastructure projects in Lebanon have struggled to progress in recent years. Since 2001, few projects have reached financial close. Among the projects tabled – but yet to complete financing, are:

Others have been attempted, for instance the 450MW Deir Ammar Power Plant which the IFC provided transaction advisory for back in 2006. Although the project reached an advanced stage, with a tender due to be issued, it coincided with an 18-month political crisis. With a new government ushered in, the Ministry of Energy and Water took office and abandoned the IPP route, tendering the project as an EPC instead.

There have been some successful projects however, including:

DFIs are likely to play a significant role in any projects to make it over the line. Both Al Ghadir and the industrial zone projects are backed by the EIB, with the industrial zones also receiving financial support from the United Nations Industrial Development Organisation and the Italian government.

A need for PPP

Lebanon is pursuing PPP to build and develop much needed infrastructure, the High Council for Privatization (HCP) says, in power, education, health, transport, telecoms and other areas. A chronic budget deficit has prevented governments from making non-immediate investments with just 4% of the budget invested in infrastructure over the past two decades.

An influx of refugees has put further strain on the country’s already creaking infrastructure, with refugees accounting for half of the total population according to some measures.

In addition, delivery of projects on time and to budget has been difficult, with traditionally procured projects on average exceeding cost by 20% and delayed beyond the agreed timetable by 35%.

The country aims to enhance economic growth through the investment programme, where it has lingered at 1.76% (2016), according to data from the World Bank. It will likewise spur job creation, with an additional 215,000 jobs to be created as a result.

PPP will also “revive and deepen capital markets through the securitization of project assets and listing of SPV shares”, according to the HCP’s website.

Lebanon’s cabinet approved the first draft of its PPP law in 2007, with the Parliament passing it into law on 7 September 2017.

Lebanon is lining up PPP projects in sectors including transport, water, wastewater, economic zones and solid waste. There are 18 planned PPP projects in total, all of which fall under the wider IIP.

The country’s HCP released a list of the 18 planned projects and their expected total value – although there is a possibility that more will be released in future.

“This is not an exhaustive list of potential PPP projects,” Ziad Hayek, Chairman of the HCP, said. “Many of the projects currently under examination are not listed, for particular reasons in each case.”

The projects are at varying stages of readiness, with some still in very early development. They will be rolled out as part of the IPP over the coming 12 years. The IIP itself will be implemented in three phases, each over the course of four years.

Lebanon’s government aims to raise some of the funding for the IIP’s initial two phases at the Cèdre donor conference to be held in Paris on 6 April 2018.

The PPP projects, and their total value, include:

And broken down by sector: 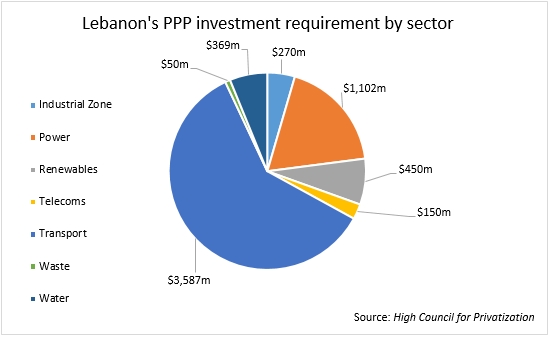 Another private sector opportunity in Lebanon – but not mentioned in the HCP’s recent list of proposed PPP projects – is the development of 200MW of wind capacity across three IPPs.

Developers of the three projects in February this year signed 20-year PPAs with Electricite du Liban and the Ministry of Energy and Water.

The developers and government initially agreed to sell power for $0.113/kWh, but in mid-2017 a lower tariff was negotiated. The new tariff signed in the PPA is set at $0.1075/kWh.

There is an 18-month, long-stop date for financial close with a further 18 months for operations to commence. The projects will be located in the wind-rich region of northern Akkar.