With every new set of performance rankings, whatever or whoever is being measured, there are winners and there are losers. Those who exceed expectations, and those who have had a shocker.

The results of the IJGlobal H1 2017 league tables, which will be released imminently, will be the final word on the current wheat and chaff of the infrastructure industry. But before we delve into the finer details of the full report, let’s take a sneak peek at a few success stories from the first half of 2017.

Among some of the highest climbers during the first half of the year, the increased work by Allens on renewable energy projects told a wider story about the sector. While the firm was only the joint 45th busiest legal practice in the world for project finance renewables in H1 2016, this year it rose to 12th on the back of six closed transactions (both solar and onshore wind). 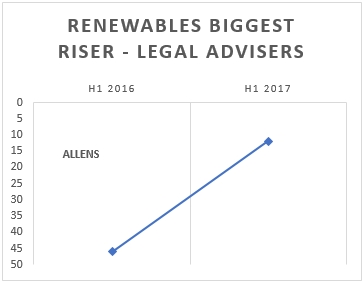 This rise mirrors the rush for renewables projects in its domestic market of Australia. In H1 2016 only five project finance transactions in the sector closed for a combined value of $684 million. H1 2017 in contrast saw 18 deals totalling more than $2 billion.

Australia has been a late adopter of renewables, despite the obvious potential for solar and wind deployment across the country. While there is still much political resistance to the roll-out of renewables in Australia, the market does appear to be gathering momentum.

Meanwhile, Hogan Lovells was the fastest rising law firm in Europe for project finance over the period, climbing 15 places to 8th overall. The firm has already closed more project finance transactions this year (seven) than it managed for the whole of 2016. 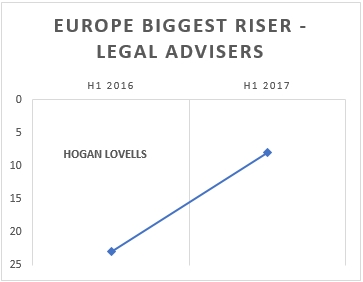 Its largest deal to date in 2017 was the third section of the roughly $1.4 billion Moscow Central Ring Road, for which it advised the main sponsor Avtoban.

Worthy of note in North America was Bank of Montreal’s impressive deployment of project finance loans in the period. From managing a mere $38.37 million commitment to the modest-sized Southgate PV in H1 2016, the Canadian bank got away $346.27 million in the most recent half-year across four transactions. 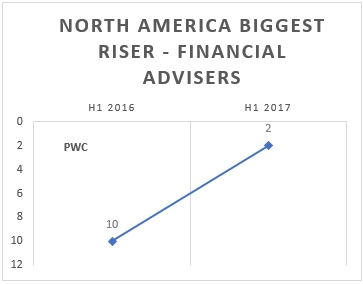 This was despite most of its deals being in a slightly shrinking power and renewables market in North America, with the total value of deals closed in the region falling by roughly $1 billion year-on-year. Its largest ticket was $237.36 million to an oil & gas project, the Trans Mountain Pipeline Expansion, and this sector in North America has actually grown in 2017 by more than $1.5 billion compared to H1 2016.