Six social and water infrastructure PPP deals totaling $1.7 billion in value reached financial close in the US over the past 14 months, double the number closed during the two years ending 31 December 2014, according to IJGlobal data. The previous peak for social infrastructure financings in the US was in 2012 when five deals closed.

Municipalities have historically funded social and water infrastructure projects in the US, and the PPP model backed by private finance has been slow to take off. States only really started turning to the private sector to plug infrastructure gaps once public sector budgets came under pressure following the 2008 financial crisis.

The model has been more readily used for transport projects which benefit from federal funding schemes like loans under the US Department of Transportation's Transportation Infrastructure Finance and Innovation Act (TIFIA) programme and tax-exempt private activity bonds (PABs),

These funding scheme are not yet available to social infrastructure projects, but even so various states have begun procuring non-transport PPPs. 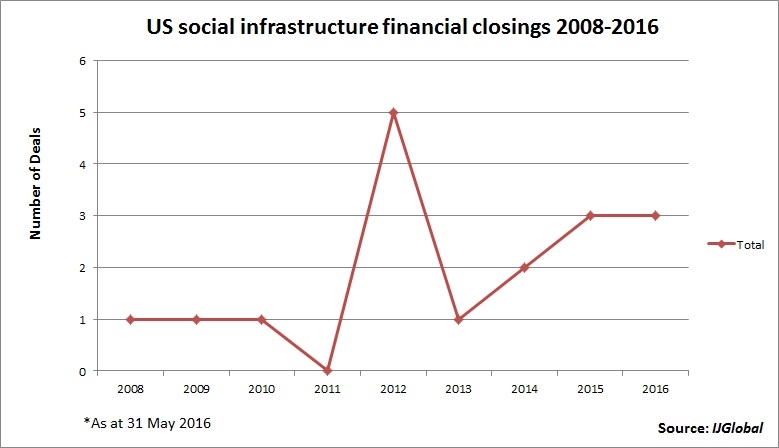 The $520 million Long Beach civic center PPP, the largest social infrastructure PPP to close in the US so far in 2016, was financed using a combination of short-term bank debt, long-term private placement bonds and sponsor equity.

The project is also the first social infrastructure PPP in the US to be financed using a taxable private placement solution, that sponsors said provided better value for money than other solutions.

The pipeline for social infrastructure PPPs in the country shows that 2016 and 2017 could represent a new spike in activity for the sector.