IJGlobal data shows that Mexico’s midstream sector has been one of the country’s most active in terms of both procurement and closed financings in the last couple of years.

Mexico's state oil and gas company Pemex and state power utility CFE are in the process of converting a number of the country’s oil-fired power plants to gas, in a bid to lower industry power costs. The country’s growing demand for natural gas has coincided with mounting shale gas reserves in part of the US.

The Pemex-led $1.1 billion Los Ramones Sur and $1.65 billion Los Ramones Norte projects are by far the two largest midstream deals to close in Mexico in the last 18 months. While these transactions differed in terms of size and structure, both achieved a pricing of 250bp over Libor with step ups rising to 350bp 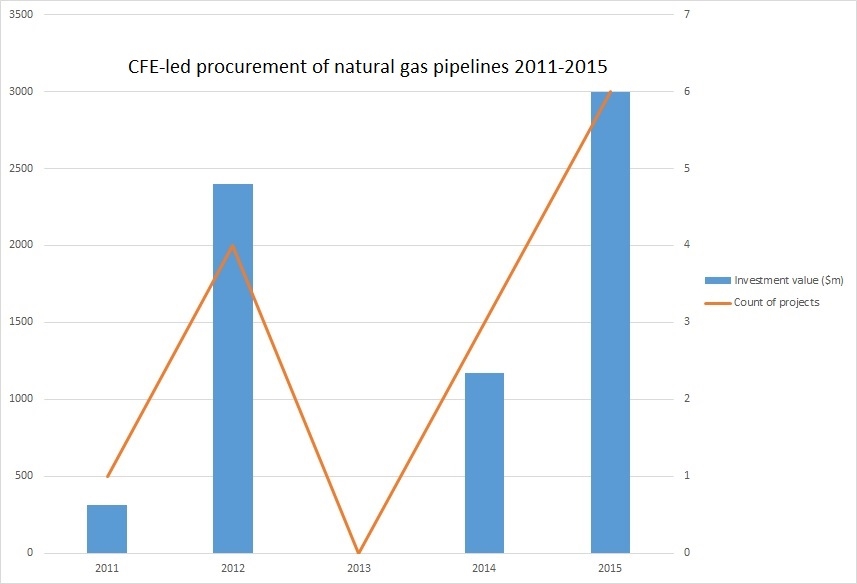 IJGlobal data shows that between 2011 and 2015, 14 pipelines worth $6.9 billion were procured by the CFE. Nine of these were awarded under the government's 2014 pipeline plan.

Four projects worth $1.2 billion have already been awarded to the private sector by CFE this year. Fermaca scooped two of these projects and Sempra subsidiary IEnova and TransCanada both scooped one each. These three sponsors are the most active midstream developers in Mexico.

CFE is slated to award at least another three projects in 2016, worth a combined $5.2 billion, which would represent more than double the amount of natural gas projects awarded in 2012.

Sponsors of these CFE-led deals have been achieving some of the best conditions in the region. The largest CFE-sponsored pipeline deal to close so far is Energy Transfer Partners and MasTec’s 20-year $1.38 billion financing closed to fund the Waha-Presidio and Waha-San Elizario pipelines. These pipelines will not actually enter Mexican territory, running through Texas and ending at the border. Pricing starts at 200bp and steps up to 275bp

Fermaca used a different formula to fund its La Laguna-El Encino natural gas pipeline. The firm closed a three-and-a-half-year mini perm loan for the project in 2015 and is expected to tap the capital markets in the takeout post construction, a model it has tried and tested for the Tarahumara pipeline. The pricing on the mini perm starts at 185bp over Libor, with a 25bp step-up within two years.