Colombia’s national infrastructure agency ANI has procured more than 4,500km of toll road projects to the private sector in the last 16 months, according to the IJGlobal database. The projects call for more than Ps26 trillion (nearly $9 billion) worth of investment.

Despite market concern over local liquidity levels, ANI has pushed ahead with the $26 billion fourth generation of highways programme (4G) programme, which consists of more than 40 concessions.

ANI is awarding 25-year concessions for 'public' PPPs under three waves of nine projects each. The concessionaires will receive vigencias futuras and some toll revenue guarantees from ANI, on behalf of the government.

More than 1,100km of carriageways were procured under the first wave and ANI is due to award the final concession in the second wave, Autopista al Mar 2,  on 20 August 2015. The third batch is due to launch this semester.

The procurement of 4G projects has gained momentum during the second wave. Under the first wave, an average of two, of a total of 10, prequalified groups bid per project. One road drew four proposals, but some attracted just one. International participation was limited and most projects were won by local firms. Tenders in the second wave generally attracted more proposals, and more foreign bidders. The Transversal del Sisga highway received a record seven. 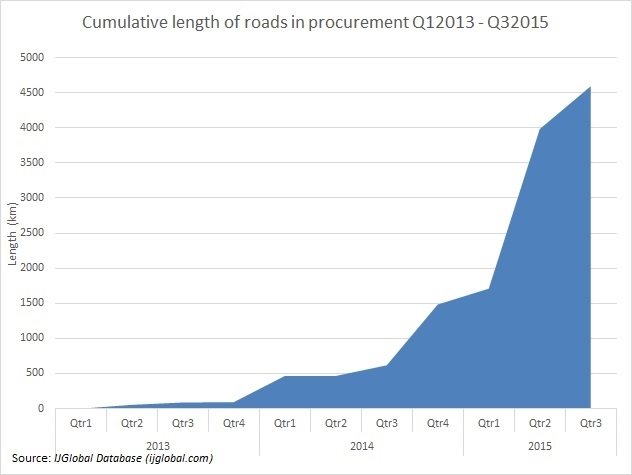 In November 2014 the national planning agency Conpes, approved the first private initiative for a highway in Colombia, which was awarded the following January. The remainder of the 4G projects are expected to be awarded under this model. These 'private' PPPs will not receive government payments and will be funded solely with private capital. The concessions typically benefit from longer tenors (30 years). Sponsors can present unsolicited proposals, which once approved, are offered to third parties in a public bidding process.

ANI has so far awarded five private initiatives worth nearly Ps6 trillion, representing 40% of a total Ps15 trillion worth of projects awarded in 2015. Two additional projects have been approved by Conpes.

Concessionaires are obligated to reach financial close within a stipulated timeframe in order to comply with contract terms. The deadline for the initial wave is fast approaching. The first three PPPs procured in this round reached financial close this month.

Goldman Sachs has underwritten close to $1.2 billion worth of debt for these projects, which will be syndicated both to the local bank market and to local and international institutional investors via bond issuances, IJGlobal understands. Construction is slated to begin on 1 November and last around five years.