Unlike other awards that IJGlobal presents, the ESG Awards can recognise activity that will have a long-term impact on the wider infrastructure market and celebrate developments that the independent panel of judges believe turn the dial.

This is very much the case for the winner of the IJGlobal ESG Transport Deal of the Year as it goes to CNG Foresight Ltd and its ambition to build a UK-wide network of public access biomethane refuelling infrastructure.

In its submission, CNG Foresight stated that the addition to 4 operational stations, 3 additional stations located at major distribution hubs on the M1 (Northampton), M53 (Knowsley), M6 (Erdington) and M62 (Warrington) were being constructed or commissioned.

This increased availability of biomethane refuelling stations, according to CNG, make the fuel source financially and logistically possible for fleet operators to accelerate their adoption of Bio-CNG fuelled HGVs.

This is all the more important given that the transport sector remains a significant greenhouse gas emitter – responsible for 28% of all GHG emissions in the UK. At the time of writing, transport emissions are only 3% lower than they were in 1990.

Increased road traffic has largely offset improvements in vehicle fuel efficiency and Bio-CNG is deemed to be one of the least carbon intensive, and most cost-effective alternatives to diesel for heavy goods vehicles (HGV).

Bio-CNG is crediting with being able to reduce GHG emissions by 80-85% while the shift from diesel to biomethane reduces particulate emissions enormously, and biomethane is also 35-40% cheaper than diesel.

One of the judges admired an “ambition to build a nationwide network of public access biomethane refuelling infrastructure in the UK” with another saluting an “innovative project – bio-CNG and a good alternative to EVs especially for the HGV category”.

Another judge pointed to the pathfinder element this deal played in highlighting the “role of biofuels in energy transition” as it “to decarbonise the HGV sector which is a much more difficult segment of the transport sector to decarbonise using EVs”.

“CNG Foresight is an innovative and potentially transformative project that will significantly reduce transport emissions. Through its biomethane refuelling stations, it will allow freight companies to use cleaner lorries to transport their goods,” said one of the judges at the ESG Judgment Day.

Currently, all fuel sold by CNG Foresight is biomethane certified through the RTFO.

Working with national and regional fleet operators, CNG Foresight has facilitated the replacement of more than 500 diesel HGVs with Bio-CNG fuelled vehicles. This has delivered significant cost savings and it has resulted in a significant reduction in carbon, air and noise emissions.

This project forms part of a wider strategy to tackle the carbon intensity of the transport sector and is fully aligned with the UK's 2050 net-zero target.

CNG Foresight has committed to supplying 100% biomethane-certified fuel to its customers. This is inherently less CO2 intensive than the diesel alternative, produces less particulate emissions, and is significantly cheaper for HGV owners. 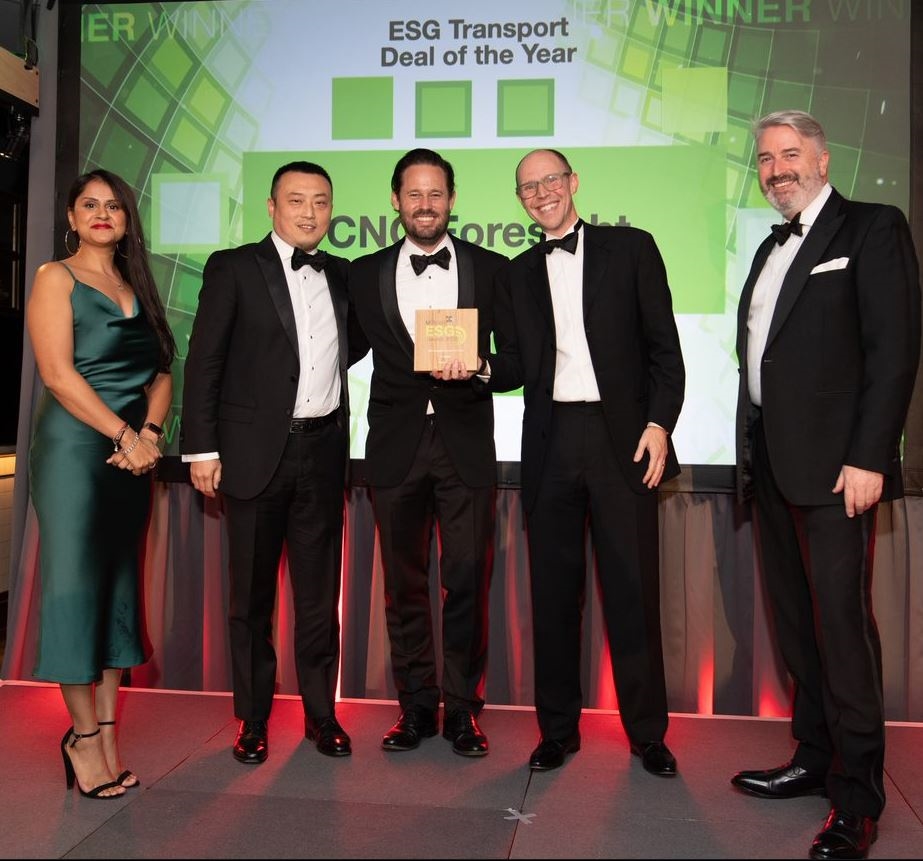 The submission sates: “In the future there may be greener options for HGVs – electric or hydrogen vehicles perhaps – but there is no 'greener' alternative fuel source that can be applied to the HGV market in the foreseeable future. Enabling the HGV sector to transition away from diesel in the early 2020s is a significant environmental benefit. The transition is expected to happen far faster than that to electric cars.”

According to DNG, this transaction has been well received by the HGV industry: “The business had some large clients prior to this transaction in the form of household names such as Hermes and Waitrose.

“However, since the transaction closed in December 2020, the volume of biomethane-certified fuel dispensed across the network continues to increase on a monthly basis.

“Other major names such as Royal Mail have placed orders to move a significant portion of their existing diesel HGV fleet across to CNG HGV's that will utilise our stations.

“Foresight's investment has accelerated this transition by enabling HGV fleet owners to see that CNG Foresight Ltd has the capital to continue to build out the network rapidly.”