In a partial replay of recent league tables, this calendar year has seen the same set of lending teams dominate the international infrastructure finance scene as two Japanese banks lead the table, with ING hot on their heels, followed by three French institutions. 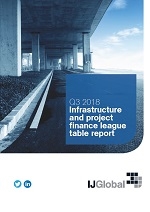 Taking into account all infra finance deals to have closed across the first three quarters of 2018, MUFG Bank pips SMBC to the top spot having lent $116 million compared to its Japanese rival with $106 million worth of deals.

ING, which prefers to see a bit more clear air between it and the most active lenders, comes uncomfortably close to SMBC with $102 million of deals closed from Q1 to Q3 2018, followed at more of a distance by SocGen, BNP and Credit Ag.

IF deal closes in Q3 2018 fell away dramatically from the previous quarter with $196.4 billion of deals making it over the line, compared to $300.2 billion in Q2 registering a drop in transactions from 547 to 455.

The stand-out deal for 2018 remains the acquisition of 94.69% of Abertis Infraestructuras by Atlantia and ACS/Hochtief for $22.5 billion. It is unlikely this mega transaction will be overtaken by the end of this calendar year.

The two largest deals in this latest quarter (Q3) are the $9.5 billion O&G acquisition of RSP Permian in the US which concluded in July, around the same time that WGL Holdings was acquired for $6.9 billion.

As for project finance, $208.4 billion worth of transactions made it to financial close around the globe in the first three quarters of 2018. Of that figure, the last quarter accounted for just $59.4 billion – a considerable drop on Q2’s $100.8 billion, but a healthy uptick on Q1 when $48.2 billion made it over the line.