The UK’s Department for Digital, Culture, Media and Sport (DCMS) announced in March (2018) that 13 areas across the UK are set to benefit from the first wave of funding from the government’s £190 million ($243 million) Local Full Fibre Network (LFFN) programme, part of the £31 billion National Productivity Investment Fund.

The scheme was launched with the government’s Autumn Budget 2017, while the first wave of financing for broadband rollout came with the subsequent Spring Statement 2018.

In preparation for this tranche of public sector funding, local businesses, schools and hospitals across Aberdeenshire, West Sussex, Coventry and Warwickshire, Bristol, West Yorkshire and Greater Manchester were the first to try out the full-fibre Gigabit network technology in the autumn of last year (2017). A total of £10 million was spent on these pilot projects – with preliminary works also including a £2 million market test for the so-called Gigabit voucher scheme aimed at stimulating the deployment of the networks at an affordable price for the end customer.

The first batch of state funding marks a decisive step for the UK towards increasing full-fibre coverage across the country, with most areas of the UK expected to have broadband as early as 2020.

As shown by IJGlobal data, of the first wave of projects to receive allocations from the state, Manchester will get the largest slice of the pie:

This batch of projects will keep true to the pilot strategy by introducing optic fibre broadband to public buildings and other important premises, improving or upgrading existing infrastructure. In the case of the Cambridgeshire project, a 40km-long fibre optic ducting will be laid from St Ives to Linton, along with planned upgrades to some 30 schools, libraries, hospitals, fire stations and other public buildings in the area. This would allow commercial operators to implement links to this Gigabit ‘spine’, especially with the voucher scheme in place.

The multi-purpose advantages of the full-fibre broadband will also span to the transport sector. The Blackpool project foresees expanding and using technology to bring about smarter tramway stops, car parking and public WiFi, while also putting an emphasis on security through smart CCTV.

In all cases, local business will also benefit from priority access to the fibre optic infrastructure.

According to DCMS data compiled by IJGlobal, on the deployment of state funds for broadband, the number of premises connected to the new superfast infrastructure has been growing steadily. 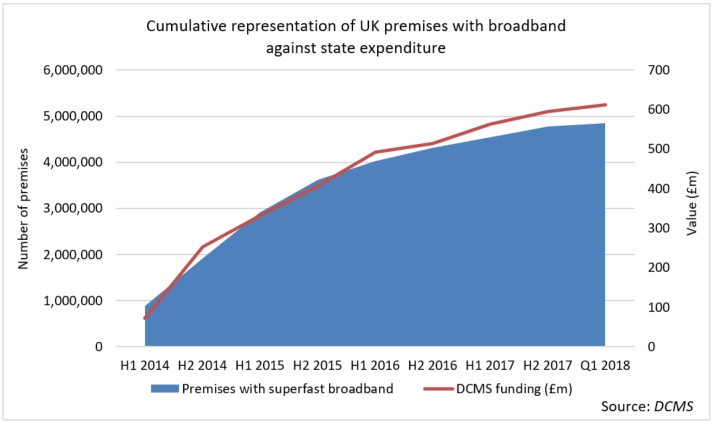 Despite the state extending financing for the expansion of fibre optic infrastructure, the capital costs of most projects are expected to exceed these allocations. The Belfast broadband for example initially sought £30 million, while at the end it received a little over a third of the required sum in the LFFN first wave. The costs mean that private investment will be required for achieving full UK broadband coverage, but luckily private capital already makes up the bulk of investment into the sector. 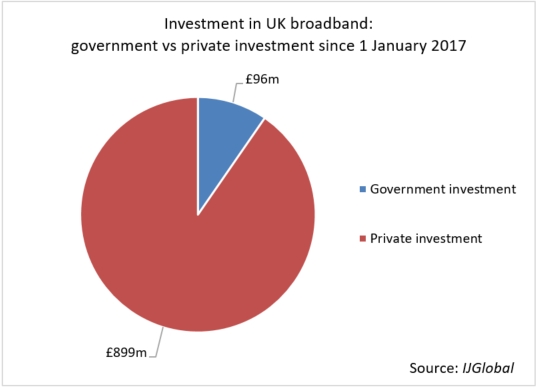 As demonstrated by IJGlobal data, private investment in broadband projects and companies that bring those projects to life is 10x greater the state funding since the start of 2017.

That said, broadband rollout all over the UK will only be possible through a close partnership of the state and private sector, especially through targeted investment from funds.

The UK government in July 2017 launched the UK Digital Infrastructure Investment Fund (DIIF) which seeks to mobilise over £1 billion for the development of full fibre broadband, and kick-start broadband connections across the country. DIIF is allocated in two vehicles:

Airband has been committed to rolling out rural broadband, while Community Fibre vowed to deploy full-fibre connectivity to 100,000 homes in both social and private house estates in London by 2019.

The acquisition of WightFibre, completed in November 2017, marked the first investment by the DIIP fund, which also received £200 million from the government. The company is developing broadband on the Isle of Wight.

With more local projects across the UK set to apply for state funding this summer and beyond, and continuing progress on ongoing projects, the UK broadband sector will offer up increasing opportunities for private investors.