It may not be one of the largest economies in Asia, but Vietnam has made a strong commitment to infrastructure spending in recent years. According to figures from the Asian Development Bank (ADB), infrastructure investments accounted for around 5.7% of Vietnam’s GDP in 2017, which put the country high on the leader board in the Southeast Asian infrastructure race. In fact, Vietnam comes second place to China for percentage infra spend, ahead of Malaysia, Thailand, Indonesia and the Philippines.

Vietnam’s rapid growth in economy and population – combined with years of under-investment – has resulted in an ever-deteriorating transportation network with serious congestion and capacity constraints. 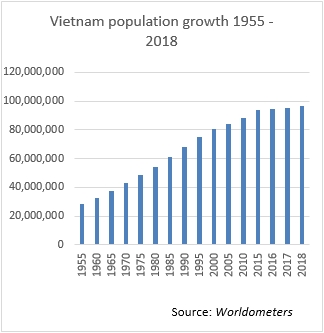 The ADB estimated last year (2017) that the nation’s infrastructure needs will cost some $480 billion through to 2030. Meanwhile taking a longer view, the G20 Global Infrastructure Outlook 2017 report suggests that Vietnam will require $605 billion to meet 83% of its infrastructure needs by 2040. This report also points to a likely investment gap of around $102 billion – of which the road sector accounts for $55 billion. Ministry of Transport (MoT) data reveals that only 20% of the country’s main roads are paved.

As shown by IJGlobal data, the value of active deals in the transport sector is substantial and these only reflect initial projects stages with more slated to follow. 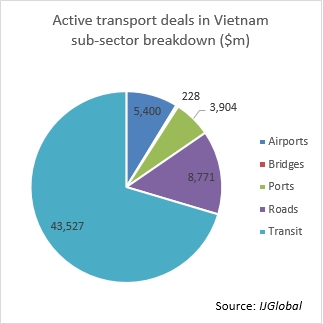 Although Vietnam’s GDP is growing at an average rate of 6% per annum, it is unrealistic to expect the government single-handedly to fund all of its infra projects on balance sheet – especially with infrastructure spending already accounting for 5.7% of GDP.

To that end, the Vietnamese government in 2010 issued pilot public-private partnership (PPP) regulations which were then revised in 2015 to promote more PPP projects and attract the greater involvement of private investment. In 2016, a project development fund (PDF) was also established to assist PPP project preparation.

These recent reforms have improved the finance mechanism's popularity. IJGlobal data clearly shows that the majority of Vietnamese transport infrastructure projects are being procured as PPPs. Almost half of all closed transport project finance deals are PPPs, and an even higher proportion of active deals are PPPs. 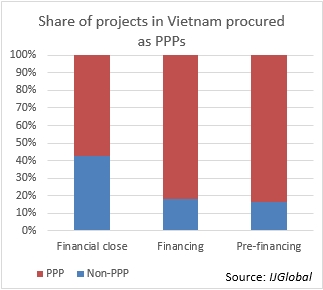 One ambitious project recently approved by the government is a 1,372km north-south highway to be constructed by 2030 at an estimated cost of $14 billion. Under the ministry’s plan, the expressway will be divided into 11 sections and mostly delivered under build-operate-transfer contracts in several phases. The first phase is already on its way.

A new $16 billion international airport outside Ho Chi Minh City, the Long Thanh Airport, is also to be built by 2025. The project will be procured as a PPP with a $5.4 billion first phase.

A $400 million section of the Tan Van-Nhon Trach Highway (part of the Ring Road 3 project) in Ho Chi Minh City is also being procured under a BOT scheme.

Although PPPs are becoming more popular, only local companies are taking part in these infrastructure projects. This is due to the lack of consistency and transparency in state policies and regulations, causing confusion for foreign investors: regulations on private investment in infrastructure are not sufficiently clear, lack of transparency in project selection and investor choice, and lack of commitment and direct support from the state and relevant authorities in the process of implementation.

If the country wants to attract foreign capital, reform of administrative procedures and bankable PPP models are essential. This will be made no easier now that Vietnam is no longer eligible for many low-cost loans having received its middle-income status.