Acquisitions of upstream-associated companies in North America surged significantly in the third quarter of 2016 for the first time in two years as producers saw strong potential for investment returns in some of the US’s most promising oil and gas plays.

While long-term oil price guidance was lowered by the Canadian national energy regulator to $90 per barrel oil equivalent in late October, with many experts predicting price stabilisiation and targeting $65/Boe by 2017 end, upstream owners have moved to consolidate their positions. Several have announced plans for upping rig counts in the first quarter of 2017.

In the Midland Basin, Denver-based SM Energy acquired 100% of Riverstone Holdings’ stake in Rock Oil Holdings for $237 million as well as 35,000 acres of QStar property for $1.1 billion in cash and the issue of about $500 million in SM Energy common stock. The latter of the acquisitions was financed in part through proceeds from the sale of 55,000 net acres in the Williston Basin to Houston-based Oasis Petroleum for $785 million. SM president and chief executive said that SM is planning to increase its Midland Basin rig count to six by early 2017 in line with its view of the potential from its assets in that oil play.

Royal Dutch Shell meanwhile moved on divestment of its interest in seven Gulf of Mexico offshore blocks for $425 million in cash plus royalty interests and sale of its Canadian oil assets to Tourmaline for $1.094 billion. Since its acquisition of BG in 2015, Shell has enacted a divestiture programme aimed at raising $30 billion by 2018 end. 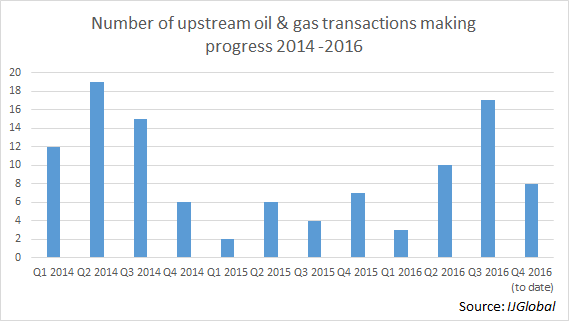 The number of transactions making positive progress ramped up in the second quarter, with activity on 10 transactions – eight acquisitions and two bond financings – with a total value of around $9.2 billion. The third quarter saw action on 15 acquisitions and a pair of Chesapeake facilities including a notes offering and term loan worth a combined $20.4 billion. Already, the fourth quarter has seen progress on eight acquisitions worth nearly $7.7 billion.

EQT has put an emphasis on consolidating its core Marcellus Shale oil and gas exploration and development position throughout 2016, increasing its holdings by 55% by adding 143,000 acres through transactions including the recent proposed acquisition of Trans Energy for $513 million.

Even outside the transaction space, the US saw its first oil and gas exploration and production company IPO in over two years with the 17 October raising of at least $594.1 million by Extraction Oil & Gas. The company plans to add a third drilling rig to its asset base in the first quarter of 2017.