The volume of merger and acquisition (M&A) transactions had already fallen globally this year before the UK’s vote to exit the EU spread uncertainty through the market. Though concerns attached to Brexit are anticipated to subside in the coming months, the US election at the end of the year is expected to create additional uncertainty.

It will be some time yet before the full implications of the UK’s vote to exit the European Union on 23 June become apparent, with much resting on the as-yet unselected next prime minister. A leadership contest is underway within the ruling Conservative Party but may not be resolved until September, which means no negotiations with the EU will begin until autumn at the earliest.

Assets may not come cheap

At an H2 outlook roundtable held by Hogan Lovells’ corporate transactions practice on 5 July, partners spoke of taking phone calls the day after the EU referendum from concerned clients from Asia, especially Japan. Other partners spoke of a slow upcoming pipeline for initial public offerings, as “many were pulled after the vote”.

But amid the concerns, deals continue to be done. The first post-referendum placement in the UK closed on 27 June: communications company Sepura Plc’s £65 million ($86 million) placing and open offer.

The frothy valuations characterising many of the deals in 2015 are not likely to go away, Hogan Lovells’ head of private equity Tom Whelan said. But the challenge will be finding sellers, with planned exits likely to be postponed due to the sterling depreciation and market unease.

This will add to the already large build-up of capital looking for investment. Whelan said: “There’s a lot of dry powder out there looking for a home. We’ve seen a lot of Chinese investors coming into the market, Canadian pension funds have made a splash in London and sovereign wealth funds.” Chinese investors particularly have been increasingly targeting infrastructure and energy assets and companies this year, as previously reported by IJGlobal.

Upcoming large infrastructure M&A deals in the UK include National Grid selling its gas distribution networks, and the sale of the M6 Toll road. Among the investors lining up for the National Grid deal are Canadian pension funds and a number of sovereign wealth funds.

Deal dip & the US election 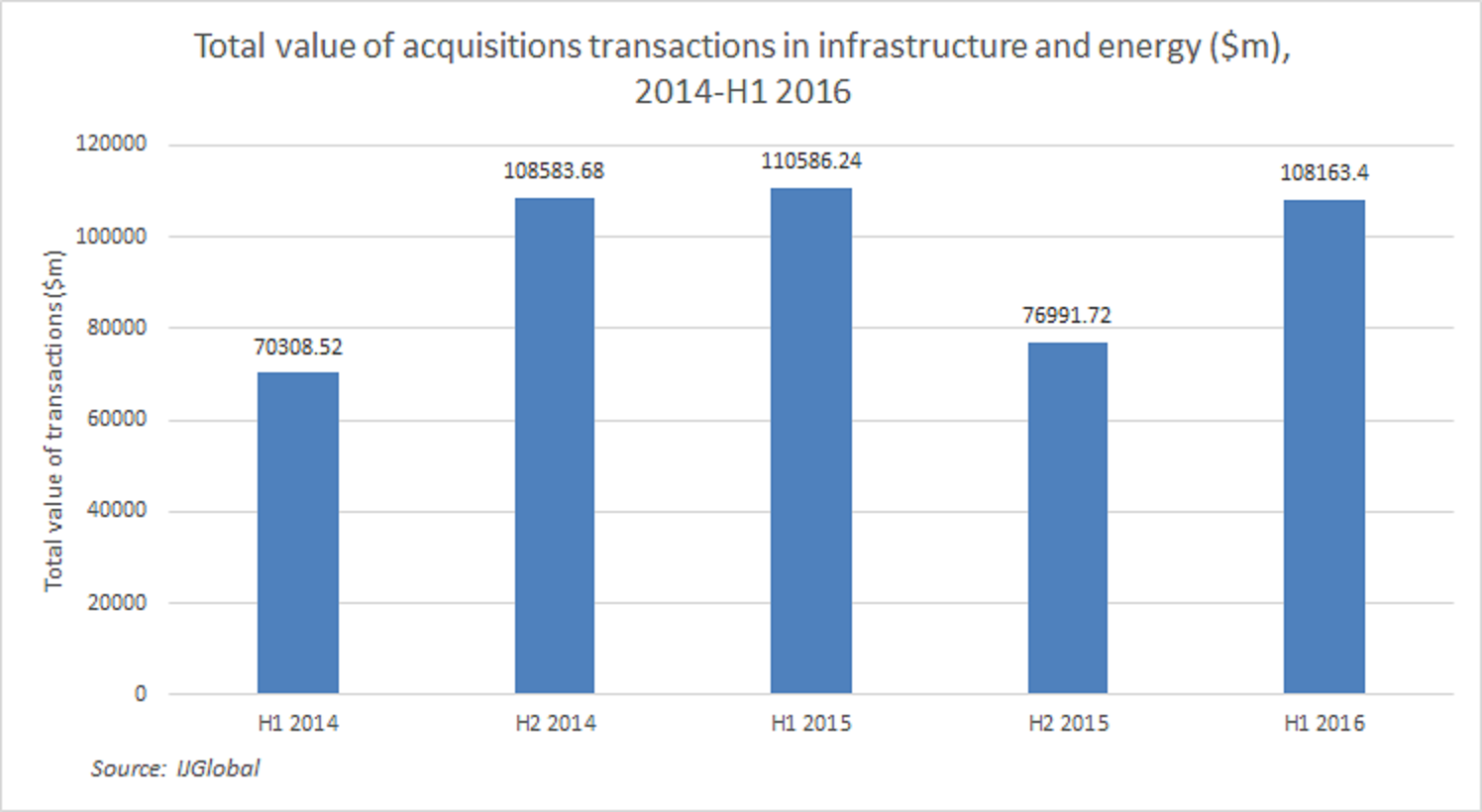 Derek Meilman, US and UK qualified cross-border M&A partner, explained that US M&A deal activity in all sectors surged in 2014 and hit an all-time record last year. But the campaign and result of the upcoming US presidential election in November will have a significant impact on deal activity towards the end of the year. Republican Party candidate Donald Trump has a much more protectionist outlook than his Democratic Party opponent Hillary Clinton, and the new occupant of the White House could heavily influence US market activity.

“In the US the whole top level of government hierarchies are political appointees, not necessarily career politicians, but rather hand-picked by the president.” Meilman said, adding that the main agencies and departments overseeing transactions will be led by those political appointees.

For M&A in all sectors, he pointed to figures from the FT that show the Obama administration blocked 17 deals per year on average from 2009 to 2014 (when available data ends), against a 14 per year average for the Bush administration during the much more acquisitive pre-financial crisis years.

Meilman said: “As well as antitrust regulators and tax authorities, the Committee on Foreign Investment in the US is another US regulator taking an increasingly activist posture with respect to approving M&A transactions”.

Recently blocked deals in energy include the March 2016 indictment of Aubrey McClendon, former CEO of American Energy Partners, for bid rigging on natural gas leases, which the Department of Justice states is the first in an on-going investigation into the sector. The Federal Trade Commission (FTC) investigated and out conditions on Energy Transfer Equity’s (ETE) proposed acquisition of Williams Companies which ETE has now terminated. In December 2015 Arclight agreed to sell four petroleum product terminals in Pennsylvania after the FTC deemed its acquisition of the assets anti-competitive.

Meilman said that for him, “the question is whether that level of activism by those authorities continues. If Clinton is elected I think that is the expectation. But a Trump election will effect transactions in the US and worldwide.”

The US was not sitting up and paying attention to the UK in the lead up to its referendum, as the noisy election primaries dominated US media. But Meilman argues there is an important lesson to be learnt from the EU referendum: “Now the US market participants and public are keenly focused. In part [Brexit] is an opportunity to see the effects the political outcomes can have on the market.”