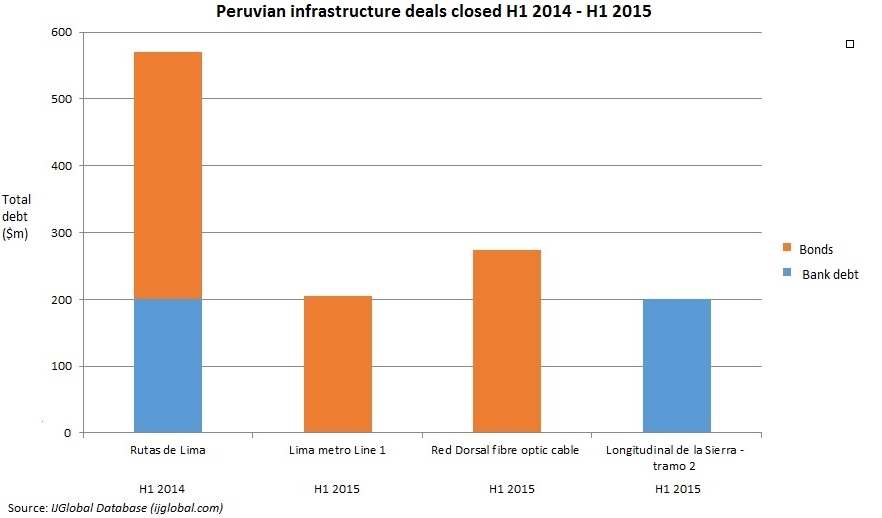 A Graña y Montero consortium kicked off the year with the first infrastructure-related bond transaction, with a Nuevo Soles-denominated senior secured issuance of VAC-indexed notes in February to fund the Lima metro Line 1.

TV Azteca’s March RPI-backed private placement for the Red Dorsal project is expected to be the first in a new wave of RPI transactions in Peru. The second wave – which included the Huascacocha and Taboada RPI-CAO water deals – ended in 2011.

Spain’s Sacyr opted for a construction loan with Banco Santander for the Longitudinal de la Sierra  Peruvian toll road, but the deal is widely expected to be refinanced with a bond in 2016. The transaction marked the first time an internationally financed milestone-based infrastructure project in Peru was not structured as a securitisation.

Private investment agency ProInversión has ramped up procurement of social infrastructure projects in the last few years. Infrastructure deals – including two transport and one telecoms transaction – worth a combined $678 million accounted for three-quarters of all project debt closed in Peru in H1 2015.

By contrast, the only infrastructure transaction that closed in H1 2014 – the $720 million Rutas de Lima toll road financing – accounted for just a quarter of total 2014 debt closed in Peru. Infrastructure's reduced share can be attributed in part to some large Peruvian mining deals which closed in the first half of last year.

More than $4 billion worth of project debt is set to close in Peru in 2015, as a number of large-scale infrastructure projects awarded in the past 18 months meet their government-imposed financial close deadlines. Nearly all are expected to feature a bond component.

The first tranche of the Lima line 2 financing, a $1.16 billion bond issue, closed in June and the remaining tranches are due to close by the end of the third quarter, as well as the Chinchero airport deal in Cusco. The multi-tranche deals will feature bank debt and bonds – as in Odebrecht’s H1 2014 Rutas de Lima deal.