The independent panel of judges for the IJInvestor Awards 2021 was in little doubt when it came to choosing BNP Paribas Asset Management head of infrastructure debt Karen Azoulay to win the Outstanding Individual of the Year Award for EMEA. 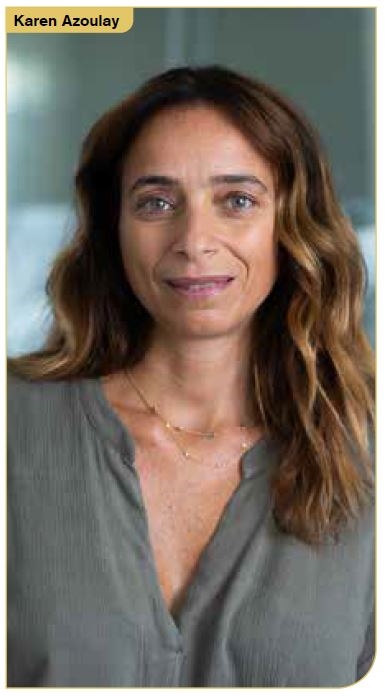 Sadly, due to the Covid-19 pandemic, Karen – who lives in France – was unable to attend the awards night in early December in Pan Pacific, London. However, her colleague Afonso Martinho Ribeiro (pictured below left) was fortunately able to pick it up for her.

In testament to the decision to award Karen such a prestigious award, the crowded room of industry professionals showed their approval of the decision with rousing applause.

Karen joined BNP Paribas AM in April 2017 and has more than 20 years of experience in project and structured finance as adviser and lead arranger. Before this she had been head of infrastructure at SCOR Investment Partners where she developed SCOR's infrastructure debt strategy and invested in infrastructure equity funds.

At BNP Paribas Asset Management, Karen has built the infrastructure debt business from the ground up.

In essence – from her arrival in 2017 – Karen built the infra debt team, the investment strategy and has successfully launched 3 infrastructure debt funds.

As a testament to her experience, skill and work ethic, the infrastructure debt strategy manages €897 million as the end of the judging period (end March 2021), with another €400 million in capital commitments. All that has been achieved from a standing start prior to 2018.

Furthermore, throughout her career, Karen has been a pioneer investor in sustainability focused projects, such as renewable energy and telecoms. She has always been at the forefront of impact investing, which can be seen in her investment style as well as the portfolios she has constructed with her team.

Karen was put forward for this award by colleagues who nominated her “as she has demonstrated excellence in the field through her continued impact in raising and deploying capital in energy and infrastructure assets”.

While it is not essential to focus all of the submission for an IJInvestor Award on the person’s activity in the judging period, it does help to make it current and bring to light achievements in recent times.

The submission reads: “In the judging period, Karen led her team to complete 8 infrastructure debt transactions, growing the strategy assets under management of both senior and junior debt from €500 million to approximately €900 million.

“All this activity was led by Karen while achieving above target returns in the first vintage senior debt fund – 3M Euribor + 272bps vs 3M Euribor + 215bps.”

The depth of feeling for Karen as a team leader is palpable and the team clearly holds her in high regard.

The submission continues: “Significantly, these achievements are more remarkable as Karen has not only built this capability from the ground up, but she has navigated through a period impacted by the Covid-19 pandemic and continued to source opportunities and manage her strategy successfully.

“Notably, the infrastructure debt strategy had only launched at BNP Paribas AM with the arrival of Karen – as the company previously only had infrastructure equity strategies before 2018.

“Karen was responsible for launching the infrastructure debt strategy, where she built a strong team and implemented her investment philosophy and style. That is, her groundwork has allowed the BNP Paribas Infrastructure Debt strategy to experience success and respect from peers across the industry.”

Over the judging period, Karen and her team succeeded in closing and completely deploying all the investor capital of the first vintage Senior Debt Fund, while also launching and already deploying €248 million of assets for the second vintage senior debt fund.

The team has also launched a junior debt fund, and towards the end of the judging period, was in the final stages of completing the first transactions for that portfolio.

More than just a debt fund Karen is rightly credited for playing a key leadership role at BNP Paribas AM and has been at the forefront of driving its successful integration of ESG considerations into the strategy.

“A key element of the investment philosophy and style, which Karen has instilled in her team, is that ESG considerations are paramount for sustained long-term value,” say her colleagues.

“The team remains at the forefront of impact investing, completing a social infrastructure transaction that lies on the frontiers of a new trend, specifically involving the provision of modular buildings for schools and day-care centres.

“Despite the commitment to ESG integration, Karen has managed to strike a balance between positive impact investing and without compromising fund performance.”

Over the 12-month judging period, the Senior Debt Fund continued to deliver above target returns, which demonstrates the quality of the portfolio that she and her team have built. This is also an outstanding feat in the context of the Covid-19 related market uncertainty and volatility.