Protesters and the political dregs are upping sticks from the COP26 summit to take “sustainable” transport solutions for the next hot air symposium as dust settles on more MoUs than you can shake a toothy grin at.

The marketing machine winds down again as the fashionably-clad slap trendy shoulders, applauding each other on a successful run a short walk from Glasgow’s theatre land.

Lounge lizards breathe a sigh of relief as they trip the light fantastic back to Soho to tell tales of incomprehensible conversations with the locals while nodding sombrely that “they were doing something important”. 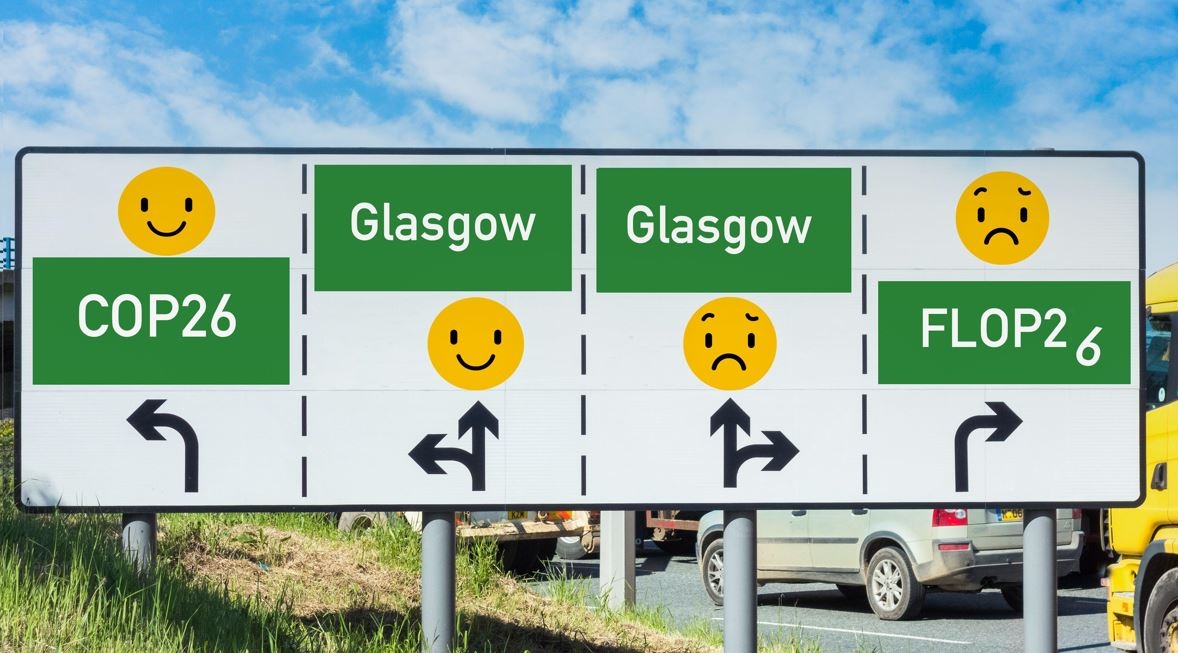 It all rather makes me hark back to the last Friday when an old friend commented on the LinkedIn post for last week’s editorial: “Lots of talk and little in real commitments. Only the eternal optimist would have expected a mega ‘conference’ to achieve much more than that. So, it is back to us all to figure out how to finance, pay for and deliver net zero infrastructure.”

That about sums it up… and it’s all too familiar.

My grandfather was a scientist at the Rowett Institute and worked with a brace of legends (all three household names in their sectors, but I’m too humble to name them) who in the early 1950s presented to the United Nations a document on the wind-down of empires, withdrawal of international presences from Africa and Asia, even anticipating the growth of China as a superpower and its growing needs.

This document laid out a roadmap for peaceful withdrawal from colonies combined with the establishment of succession administrations, a plan for nations to feed themselves and trade internationally – sidestepping civil war, starvation and poverty.

Did they read it? Yes, they did.

Did they act on it? Did they hell.

The most famous scientist of the trio jacked it all in after that and became an investment banker. That kind of says it all.

It is with that in mind that we shrug off the clap-trap of COP26 and look to the future and how we are to deliver on the promises that are being made by flash-in-the-pan politicians and marketing monkeys.

Well, something happened this week that rather had one thinking about the renewables space in the context of big utilities, their exposure to alternative energy and their all-important ESG standing.

You cannot have missed the high point of this week’s news in Europe that Engie and Credit Agricole had acquired Spanish wind developer Eolia for north of €2 billion from Alberta Investments. The French utility will own 40% with CreditAg taking the remaining 60%.

While the Eolia acquisition is a much larger transaction, it does rather make one think of a deal that signed in April and closed in June, and wonder whether we’re witnessing the consolidation of a trend… which we are.

The other transaction is Ørsted acquiring Brookfield Renewable's Ireland and UK onshore wind business – Brookfield Renewable Ireland (BRI) – for €571 million. This portfolio included (at the time of acquisition) 389MW of wind farms in operation and under construction, in addition to 149MW at advanced development stage with a pipeline of more than 1GW.

This was heralded as Ørsted’s entry into European onshore wind market having in 2018 signalled its intention to focus on the US market for onshore wind.

Without getting too far from the point of this piece, what we are seeing here is a trend that’s going to keep M&A teams busy in the coming year/s – large-scale utilities buying up renewable energy portfolios and energy companies to improve their mix… if not make complete U-turns.

Would sir care for beans with that beanfeast?

We appear to be on the threshold of a lucrative spate of acquisitions for which the ground has been set for quite some time and there’s a lot of people out there rubbing hands in glee at the prospect – and quite right too, the fees on these deals are impressive.

It was back in late 2017 that IJGlobal reported on BP taking a 43% stake in UK-based solar energy firm Lightsource for $200 million – re-branding it Lightsourcebp – paying $50 million at close and the balance over 3 years. Word reaches IJ of at least one superyacht.

Since then, there have been more deals closed than could possibly be reported here without spending the rest of the afternoon trawling through the IJ archive.

In recent times – apart from the Eolia and Brookfield deals – one of the most significant transactions in this space saw Vinci in March (2021) sign a €4.93 billion binding sale and purchase agreement for a majority of the Spanish ACS Group's Industrial Division.

While this acquisition involved 8 PPPs, it was dominated by energy projects and central to the strategy was buying the platform to develop new renewable energy projects. Vinci and ACS then forged a 51/49 JV to acquire renewables assets to be developed, built and connected to the grid.

It would be foolhardy to identify every utility planning to ramp up their present in the renewable energy space because that would just be a laundry list of household names, but from Iberdrola through to NextEra and National Grid Renewables… there’s a lot of deals on the horizon.

The transition is gathering pace with the likes of SSE moving away from investment in E&P assets in its bid to reach net-zero emissions. For this company alone, it plans to invest £7.5 billion in low-carbon energy infrastructure over the next 5 years and to treble its renewable electricity output by 2030.

There is only one way all of these industry giants can achieve their goals and that is through a lively acquisitions agenda.

It feels like we have just stepped back in time to when all the infra funds were cutting each others’ throats to snap up equity stakes on PPP deals… only the numbers are going to be a lot bigger and the buyers a more natural fit (in many cases) for the assets acquired.

So for all the jawing and sound bites from our glorious leaders at COP26, changes in strategy like these – often where utilities are re-building portfolios that they sold over the years for a quick gain – to secure their own Net Zero ambitions that will allow nations to achieve their goals.

The time has arrived for early-stage developers to do what they do best and deliver the pipelines they plan with one eye to the skies as the buzzards circle their prey.