From the world’s first pilot system in Aichi, Japan, some 13 years ago to Marubeni's 181MW project in western Taiwan that closed in April 2020 with a NT$7.2 billion ($239 million) debt package, it is not surprising Asia dominates the market for floating solar, or floatovoltaics.

High population density, coupled with the perennial challenges of land availability and long-lost titles, drive the growth of floatovoltaics in developed and emerging markets in Asia. Another reason is the opportunity cost of developing ground-mounted solar PV projects in countries with land scarcity.

The banker adds: “The developer tried to solve the problem of land availability ahead of time. Now the Government of Indonesia doesn’t want to develop coal anymore. That’s fine and commendable. But for the same amount of land the developer can only install 100MW ground-mounted PV. That’s 5% of the installed capacity of the coal-fired. No one talks about that little issue.”

The floatovoltaic industry (or IJGlobal’s sources) classifies projects into 4 tiers in order of system complexity, based on the project’s location:

Tier 1 normally has the lowest capital cost per MW and debt pricing while tier 4 has the highest. However, no 2 projects are the same and it depends on the project dynamics, as everyone in project finance loves to say.

Regulators, developers, financiers and advisers are grappling with floatovoltaic’s technical risk and lack of standards across the tiers. Asian Development Bank (ADB) senior energy specialist David Elzinga (pictured) leads the bank’s technical assistance on a floatovoltaic programme in Afghanistan, Azerbaijan and Kyrgyzstan. “The dominant issue for financiers is the perceived technical risk, and by deploying pilots we are addressing this,” he says. 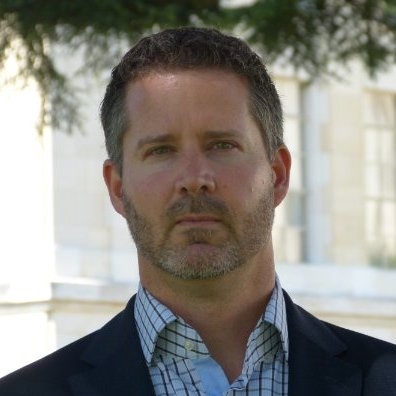 Five local and international bidders submitted their proposals on the first 100kW pilot project in Azerbaijan, where more than 90% of power is from oil- and gas-fired power plants. Elzinga anticipates the government’s selecting the preferred bidder this month (September 2020).

Sembcorp Industries in August 2020 had closed a S$40 million ($29.3 million) project finance loan from DBS for the former project. Société Générale, SMBC and Standard Chartered are to be lenders on the latter project, a deal watcher whispers, though the transaction is in due diligence and has yet to go before credit committees.

The Norwegian firm is facilitating a floatovoltaic industry group with 20 members across the value chain to develop standards in 5 areas – site conditions assessment, energy yield forecast, mooring & anchoring systems, floating structures, permitting and environmental impact – to increase the quality and reliability of floating PV installations, according to Silpa Babu (pictured) of DNV GL. 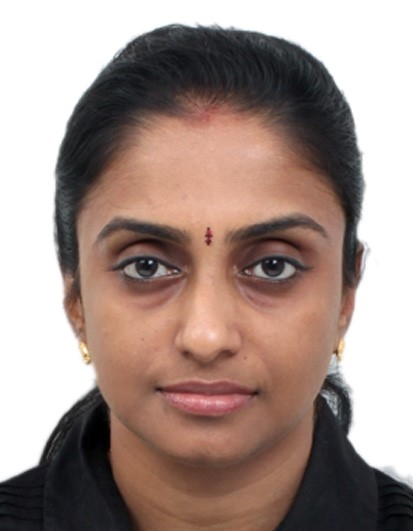 “Too often, standards, codes and requirements are used that are not specific for floating solar but rather adapted from other industry fields, for example, offshore structures, building codes and ground-mounted solar,” Babu comments. “This can lead to either too strict requirements – hence killing the business case – or too soft or irrelevant requirements, hence leading to increased risk of failures.”

Learning as we go

Sources IJGlobal talked with agree that independent power producers and bankers lack reliable comparables of large-scale floatovoltaics to brief board of directors and investment committees.

When Marubeni’s 181MW Changhua Coastal Industrial Park floatovoltaic in Changbin Lunwei East, Taiwan, starts operations later this year (2020) – if it meets the commercial operations schedule – the project would (however briefly) be the world’s largest floating solar.

Commercial lenders on the 6-year, non-recourse debt package were:

Kelvin Wong (pictured), a banker at DBS, remembers the novelty of the Taiwan project: “I was surprised when our adviser Mott MacDonald said they couldn’t find relevant benchmarks anywhere in the world at the scale we were looking at.” 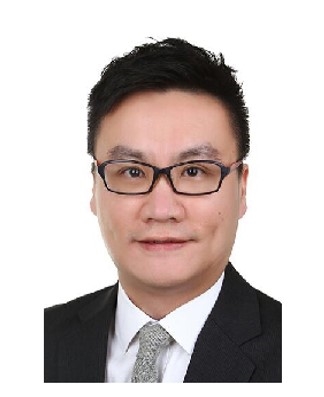 The DBS managing director of project finance adds: “The lack of benchmarks on construction costs, warranties and O&M costs, in particular, put some international banks off.”

“This new asset class doesn’t have a long-term track record yet,” Société Générale managing director Daniel Mallo (pictured) tells IJGlobal. “Long-term costs, performance and cash flows have yet to be fully validated. There are expectations and assumptions about the economic and environmental benefits of higher energy yield, reduced evaporation and improved water quality. But the evidence is not yet in for large-scale projects and for longer periods of time. It’s not dissimilar to what happened a dozen or so years ago with the ground-mounted solar asset class. We tend to also learn as we go.” The debt-to-equity ratio and tenor are “not so different from what you see in the market,” says a Singapore-based banker. The tenor on the Taiwan deal was 6 years. This length was not due to the subsector’s novelty but because that is the “sweet spot for local lenders and it’s more customary to do medium-term and refinance in year 4 or 5 in that particular market”, according to SocGen’s Mallo. Bankers anticipate a long-term tenor on Cirata in Indonesia, as only international lenders with appetites for long tenors are on the deal.

While sources were reluctant to confirm a specific debt-pricing premium over other solar PVs, “in a year or two that premium will go away”, predicts Wong.

An early mover’s fall back is to structure and finance floatovoltaics as they would ground-mounted PV projects.

“The financial model getting through to financial close is not going to be significantly different for a ground-mounted versus a floating versus a concentrator – or any other PV,” remarks Brett Crockett (pictured), director of energy and infrastructure at modelling specialist Mazars. “It’s all pretty similar.” 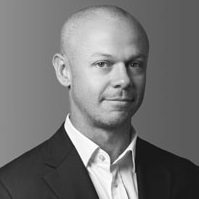 Obviously, decision-makers are approving the financing of the large-scale projects.

“Though there are not many comparables, there are ways to get comfortable with these projects,” a banker experienced in floatovoltaics confides to IJGlobal. “Technical due diligence may take longer than other PVs but it’s well worth it. A solid sponsor is crucial with the financial and technical bandwidth to take care of these more innovative structures and keep on top of the operations and maintenance contractor.”

Mallo stresses the sizing of the debt, including beefing up contingencies, and running sensitivity analyses on the projected cash flows to allay concerns by credit committee members.

Marching through the fog of war

Market participants emphasise several ways to accelerate the uptake of floating solar. These include designing a regulatory framework, mapping a pipeline of potential floatovoltaic IPP projects and agreeing on industry standards. The overarching theme among the recommendations is enhanced visibility.

“We need governments, complemented by dialogue with industry, to establish a sensible regulatory framework not just for renewables but for the power sector, in general,” says Cindy Cisneros-Tiangco (pictured), ADB principal energy specialist. Elzinga’s predecessor on the Central and West Asia floatovoltaics programme has shifted to the bank’s Pacific department, where she works with small island states to deploy larger scale floatovoltaic projects. 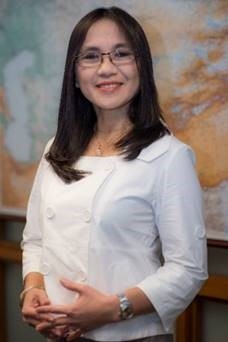 “Tonga is at the forefront of involving the private sector in ground-mounted solar,” Cisneros-Tiangco tells IJGlobal. “Nearshore and marine floating solar is a good fit for the Pacific Islands and could become the game-changer for these markets. We expect energy storage to play an increasingly important role to address uncertainty around grid absorption to attract more private sector investments.”

Implementing agencies could also take a programmatic approach to floatovoltaics by working with advisers to develop a list of water bodies that are suitable for the subsector.

“Private sector would then have visibility into the pipeline of projects in each market,” says Wong at DBS.

The Dutch Water Authorities, or Unie van Waterschappen, have identified many sites for floating solar, and India’s Ministry of New and Renewable Energy has conducted feasibility studies, prioritising some reservoirs, according to DNV GL’s Babu.

Indonesia is considering plans for installing floating solar PV on a further 60 reservoirs, while the Electricity Generating Authority of Thailand (EGAT) has a floatovoltaics programme that stretches into 2037.

A Thai-Chinese consortium of B Grimm Power and Energy China had signed in January (2020) a contract with EGAT to develop the Bt1.87 billion ($60 million) Sirindhorn Dam floatovoltaic in Ubon Ratchathani province – the first of 16 planned projects with a total of 2,725MW of generation capacity across 9 dam reservoirs. 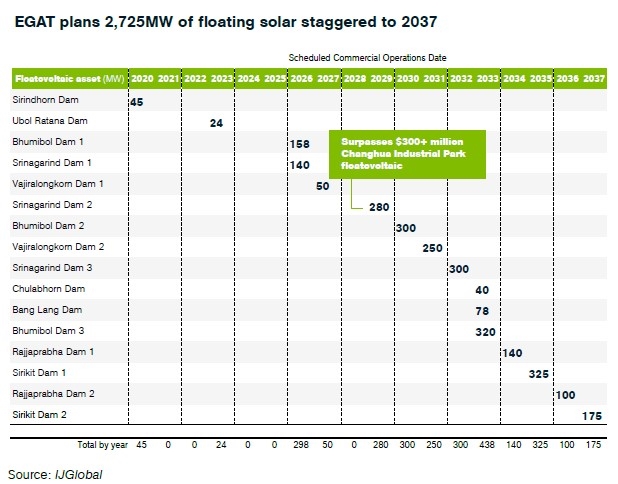 The joint floatovoltaic industry project anticipates releasing its draft guideline for industry consultation at the end of January 2021, with the final recommended practice guidance published 1 or 2 months later. The consortium recently welcomed 2 Asia-headquartered members: QuantSolar in India and Sun Rise E&T in Taiwan. The project would welcome a PV module supplier.

“It is in the interest of bankers to finance and invest in performing and long-lasting FPV projects, which will not sink or catch fire after 5-10 years of operation or after a mild gust of wind,” DNV GL’s head of section for solar in India emphasises. “It is also interesting to see the approaches of different participants and how there is a real mismatch between sound engineering practices for FPV and what is normally asked as a requirement for FPV projects.”