Australian state energy ministers in August (2018) came one step one step closer to approving the National Energy Guarantee (NEG) as a replacement for the current renewable energy target (RET), forging a contentious energy and climate policy to lower energy prices and increase investment in clean energy generation through regulatory certainty. In short, it contained an emissions guarantee and a reliability guarantee.

The emissions guarantee – which has since been scrapped – would have imposed an obligation to energy retailers to reduce pollution, with an expected target of 26% by 2030 (against 2005 levels). It also included emissions validation requirements, registering of contracts and the option to trade surplus emissions, which would have benefited the largest, most vertically-integrated suppliers.

The reliability guarantee, meanwhile, designed to encourage suppliers to contract and invest to maintain energy system reliability, appears to have been kept alive by the new Scott Morrison administration. This aspect of the policy would dictate for regions the minimum level and types of dispatchable capacity required.

Ahead of the Council of Australian Governments' (COAG) energy session on 10 August to vote on the draft NEG, Herbert Smith Freehills partner David Ryan told IJGlobal that he believed there was a risk that the model would become inefficient in practice, likening it to the existing reserve trader mechanism. On the other hand, one large infrastructure fund manager said that there was potential for new investment opportunities, especially in distributed energy infrastructure.

Although infra funds participation is increasing, market participants had concerns over NEG’s onerous complexity, pervasive long-term policy uncertainty and its restrained renewables ambition. This was principally down to the slated 2020-21 (the planned first year of the scheme) target of 24% reduction to pollution, meaning that once the target of 26% was reached, there would be limited incentive for continued commitment to renewables.

Australian states that have long been engaged in renewable power generation were concerned about the NEG's intention to remove the variable national emissions target. Victoria and Queensland supported re-setting the target – only upwards – every three years.

One of the most successful bidder in the Victoria reverse auction – by MW – was Tilt Renewables, a portfolio company of HRL Morrison-managed infrastructure fund Infratil. This reflects market sentiment that some of the largest fund managers worldwide are either targeting, or are already intensely involved in the development of Australian renewables. IJGlobal data on the state of Victoria shows an overall positive growth trend in renewable energy investment. 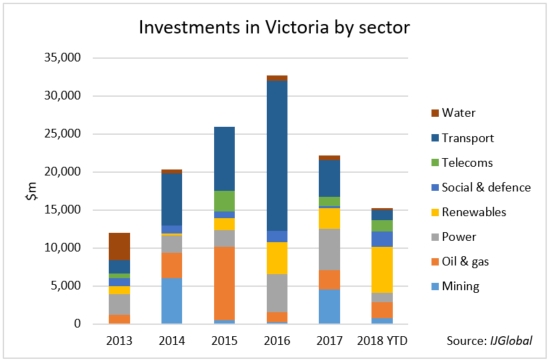 The first stage of the facility includes the installation of 61 turbines with a total capacity of 226MW. It will be supplemented by a second stage with 55 turbines taking it up to 429MW, as well as a solar farm and energy storage project – supported by RES and Macquarie.

The IIG Solar Asset Fund – launched in May by Melbourne-based Impact Investment Group (IIG) with a target size of A$120 million – reached first close in just two months, raising A$55 million.

It has already made two seed investments in solar PV projects in Victoria and Queensland:

Both facilities are currently under construction.

Other fund managers are relying on partnerships with developers to expand their portfolios. Partners Group recently entered a A$700 million agreement with Australian developer CWP Renewables to boost its portfolio to 1.3GW. The Grassroots Renewable Energy Platform aims to construct new wind, solar and battery storage assets across Australia over the next four years. 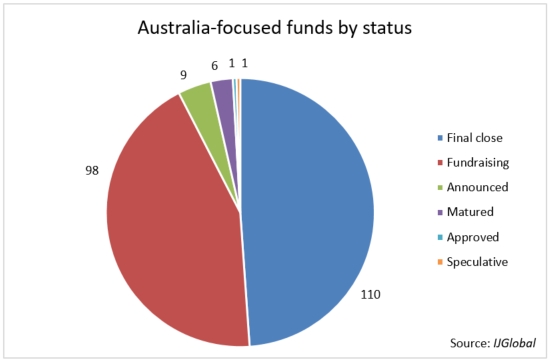 IJInvestor data further shows that out of 225, nearly half reached final close by 1 October. 44% are still in fundraising, while a small portion has already matured or is preparing to launch.

Since the beginning of 2013, 12 funds have participated in renewable-energy project acquisitions. Six funds have been actively involved in such deals in Australia since the start of 2018 – deploying more than $6 billion in capital – with a large portion of the assets located in Queensland and Victoria. 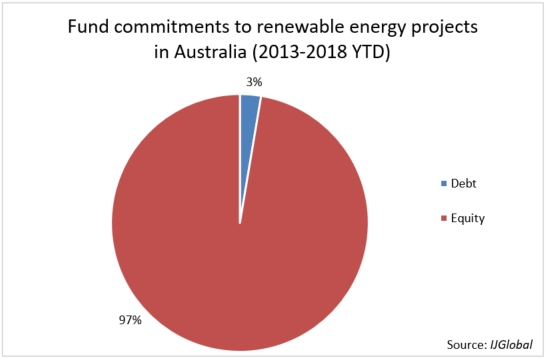 In contrast to sponsors, funds are committing more money in the form of equity, in preference to debt financing.

IJInvestor data demonstrates that equity contributions historically prevail significantly when it comes to investments in renewable energy in Australia.