Bangladesh launched its first geostationary communications and broadcasting satellite – the Bangabandhu Satellite-1 – in May this year, marking a significant milestone in the country’s digitisation process as set out in Prime Minister Sheikh Hasina’s ‘Vision 2021’ programme.

While the country's satellite will only travel out to the farther reaches of earth's atmosphere, critics could argue that some of its wider economic ambitions are truly out of this world. And infrastructure development to date is far from accelerating at escape velocity.

The Bangladeshi government announced its ‘Vision 2021’ pledge in 2008, setting out a roadmap to a middle-income, digitalised Bangladesh free of hunger and poverty. Key to its plans is economic growth, and the government wants to increase investment opportunities – both domestic and foreign – in order to create more job opportunities and to produce import-substituting goods.

And some metrics have been moving in the right direction. According to the Bangladesh Bureau of Statistics the country's national poverty rate, which stood at 56.7% in 1991, had fallen to 22.4% by 2016 – though this decline has been slowing in recent years with a rate of 31.5% recorded in 2010.

One of Bangladesh's more ambitious targets is to become the world’s 30th largest economy by 2030. In order to achieve this, according to the Dhaka Chamber of Commerce and Industry, Bangladesh would need around $24 billion of investment per year into infrastructure alone.

Progress on this front has been much slower. 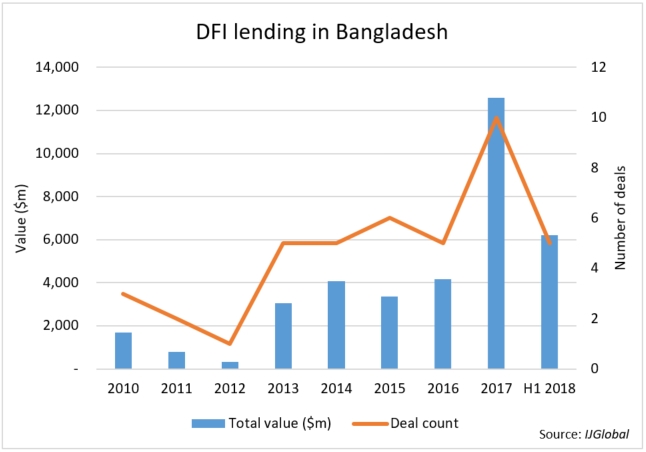 IJGlobal data shows that development financial institution (DFI) lending into Bangladesh has been sporadic this decade, though the trend is positive. With commercial bank loans remaining an exotic product, DFI support is essential for infrastructure development.

The level of government-to-government lending in Bangladesh, meanwhile, has been significant since 2010.

Indian and Japanese support in the country has been steadily growing. India first extended a credit line worth $1 billion towards Bangladesh in the year 2010. In 2016, the Indian government provided a landmark $2 billion credit line towards the country, at that time the largest LoC extended by India to another country. However, on 4 October 2017, a $4.5 billion LoC was signed, which together with additional project loans brought India’s investment in Bangladesh to over $9 billion.

Japan has committed more than $12 billion in aid during the last four decades in the form of grants, loans and technical assistance. Japan recently pledged to provide up to $6 billion over the next five years as part of the industrial growth initiative known as the Bay of Bengal Industrial Growth Belt.

Although substantial at first glance, the Japanese and Indian support is small given the scale of the Bangladeshi infrastructure gap. The lack of adequate funding so far has left a big hole not yet being filled by other types of investors.

In October 2016 China signed project funding agreements which amounted to the largest ever investment package committed by a single country to Bangladesh. The treaties concern the development of 34 projects worth over $25 billion.

This move was part of Chinese President Xi Jinping’s initiative to promote China’s Belt and Road initiative. The agreements are significant not just for their purported economic benefits, but also for the new dynamic these developments could bring to the South Asian region.

The agreements provide much needed investment into sectors such oil and gas, transport, and education, but come with special conditions.

While loans from Japanese investors typically carry interest rates of around 0.25%, and World Bank and Asian Development Bank (ADB) lending will be priced around 1%, Chinese loans have rates as high as 2% and 3%. Chinese loans also often require project contracts to go to Chinese companies.

The government of Bangladesh may deem this a price worth paying, if there are viable alternatives to bridging its investment gap. China has also proved a useful ally for problematic projects.

The World Bank scrapped its assistance for the Padma bridge project in 2012 due to allegations of corruption. China then stepped in to provide the required funding.

In November 2017 the government issued a list of 12 priority projects to be signed in 2018, which required Chinese investment of over $8 billion (the first 12 projects in the table above).

Out of the 34 planned projects there has been little progress so far. Disbursement has been made against only two projects – the construction of the Karnaphuli Tunnel in the port city of Chittagong and Bangladesh Digital Connectivity Project Info Sarker-3. Work has also started at the 1320MW Payra Coal-Fired Power Plant.

Necessary preparations for signing loan agreements have been completed for just six of the projects.

The remaining projects are still in their very early stage. The delay, explained by Finance Deputy Minister M A Mannan, is caused by the scale of investment being considerable and needing more time for implementation.

Just three years away from the country’s 50th anniversary of independence, the development of a number of infrastructure projects in Bangladesh represents a positive shift in the country’s future progress.

With only some 77% of rural households having consistent access to electricity according to data from the World Bank, and power outages causing output losses equivalent to 3% of the GDP of Bangladesh, challenges remain significant.

Increased exports and growing domestic demand look likely to drive economic growth into the future, if Dhaka manages to its growing debt pile.