Namibia has long been at the mercy of electricity imports from South Africa and other countries across the region. In order to reduce this dependency, reforms have been undertaken in an attempt to attract independent power producers (IPPs) into Namibia’s power sector, and the country is starting to see positive results via solar PV tenders.

According to Afrobarometer research, only 43% of Namibians have access to electricity, and that percentage is much lower for the country's rural population, where only 23% benefit from a reliable electricity supply.

Namibia’s domestic generation mix consists primarily of hydropower, with the 332MW Ruacana hydropower plant near the border with Angola its biggest power source. However, about 60% of the country's total electricity consumption is met by energy imports from neighbouring states. As shown by IJGlobal data, the country’s domestic generation capacity is only around 560MW.

The Electricity Control Board (ECB) of Namibia, the Ministry of Mines and Energy and state utility NamPower in 2015 launched the Renewable Energy Feed-In Tariff (REFIT) programme in an attempt to reduce the country’s electricity imports and attract private investments in the development of renewable energy projects. The scheme is designed to promote small-to-medium size renewable energy projects and boost domestic businesses through a mandatory 30% local ownership of IPPs.

Namibia also benefits from one of the highest solar radiation levels in the world. Small solar PV installations can function as distributed generation, potentially reducing the technical and financial challenges associated with delivering small amounts of power across a large area. This combined with a continued fall in global panel and equipment prices, makes a strong case for solar development in the African country.

As part of the REFIT programme, 14 power purchase agreements (PPAs) for 5MW of generation capacity each were signed between NamPower and various IPPs. The beneficiaries – consisting of one wind and 13 solar projects – are set to produce a combined 70MW that will be fed into the national grid, as demonstrated by IJGlobal data below.

Three years after being launched, 10 of the 14 projects have reached financial close and have been grid-connected, bringing the total capacity of closed renewables projects in Namibia to over 90MW.

The new projects have received multilateral support. In April (2018), the Multilateral Investment Guarantee Agency (MIGA) announced that it will provide guarantees for the Ejuva One and Two projects. MIGA is also providing breach of contract cover, on all of the 14 PPAs signed between NamPower and the project companies. 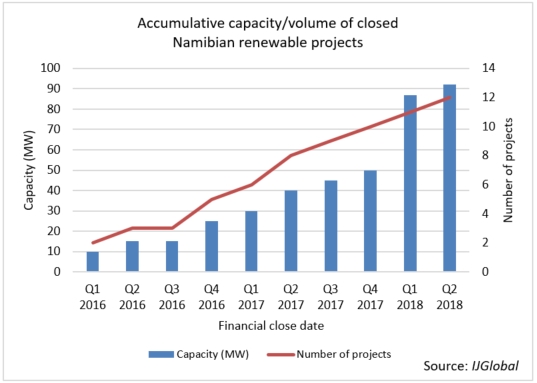 In addition to the REFIT projects, Alten Africa in March reached financial close on the 37MW Hardap solar PV plant in the Mariental municipality. This project received a multilateral guarantee from Proparco against the R608 million ($50.8 million) in debt provided by South Africa’s Standard Bank.

NamPower has also signed a PPA for the 44 MW Diaz wind farm.

Paying the price of success

All of these small-scale, privately-developed power plants are expected to pave the way for future larger projects in the country, creating a successful track-record for private investment.

Although it appears that Namibia is on the right path to solving its electricity under-supply problem, it should be noted that such progress has come at a price.

In April (2018), the European Central Bank (ECB) approved a tariff increase of 5%, effective from July, so that NamPower could cover its operating costs, fulfill its financial obligations and ensure a continued supply of electricity. These tariff price rises are being passed on to Namibian electricity users.

According to the ECB, Namibia’s peak demand will reach 1.33GW by 2035, an estimation based on predicted GDP growth and future electricity use. In the most recent (fifth) National Development Plan, the government set a target of 755MW for locally generated energy capacity by 2022 and a target of providing 70% of the country's energy needs to be produced by renewable resources by the year 2030.

The National Integrated Resource Plan also includes an allocation for biomass power plants with capacity of as much as 200MW.

Bridging the considerable gap between the country’s currently available capacity and future demand will fall in large part on the government and energy regulator. But solving Namibia’s energy equation necessitates attracting private capital in cost-effective generation, with an eye on the right incentives to foster local entrepreneurial participation and expand access to electricity for the country’s population.