IJGlobal is today (31 July) publishing its second issue of the IJInvestors Funds & Investors Report – this one reporting on fundraising activity by global infrastructure funds in the first half of 2018. 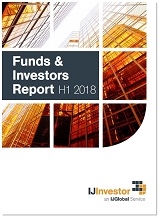 This latest research exercise identifies $21.7 billion raised by 14 funds in Q2 in equity and debt to target infrastructure and energy around the world; following on from $22.5 billion across 17 funds in Q1.

This is fairly healthy performance for the sector, showing continued appetite for the asset class as impetus is maintained, but considerably down on the spike halves when $52 billion and $50.6 billion was raised – in H2 2016 and H1 2015, respectively.

Taking a measured view of the market, the average amount raised – at final close – in each half from the start of 2015 to the mid-point of 2018 comes in at $39.6 billion.