Demand for healthcare across Latin America has been steadily increasing, outpacing supply, and creating a thirst for more infrastructure across the region. And the decrease in unemployment and reduction in poverty rates have resulted in a wealthier population, demanding better health services.

Historically, less developed countries have placed the burden of healthcare provision and financing solely on their governments. However, with significant funds now needed to outweigh the years of underinvestment in Latin America, minimising the impact on government budgets could speed up the process and reform an undernourished yet vital economic sector. With GDP growing on average 4% per year since 2003, the region is very alluring for private investment.

PPPs are becoming an appealing mechanism for delivering healthcare projects in the region, requiring only limited up-front capital investment from the public sector. As shown by IJGlobal data, Mexico and Chile have led the way by introducing ambitious programmes. 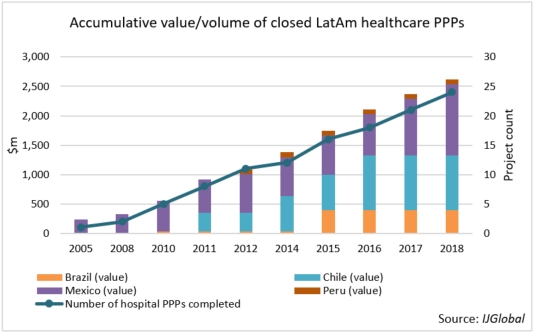 At the turn of the century, the rapid economic and demographic growth in Mexico had already triggered a substantial undersupply of healthcare services. In response, the government launched a health infrastructure programme (Plan Nacional de Desarrollo y Programa Sectoral de Salud) in 2002, alongside a wider PPP programme (Projects for the Provision of Services (PPS)).

The success of the programme led the Mexican congress to approve legislation in 2012 to refine the framework for PPP projects.

Chile launched its first healthcare PPP programme in 2009. To start the programme, the La Florida and Maipu hospital developments were bundled together and tendered as one single project. After this success, Chile tendered additional replacement hospitals in 2014:

The successful completion of the projects in Mexico and Chile has led to the drafting of new PPP legislation in a number of countries, aimed at encouraging and incentivising private participation. A pipeline of projects is already evident, as suggested by IJGlobal data. 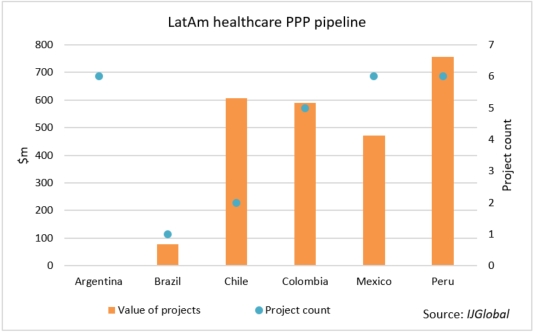 A total of 26 new hospital facilities are being procured through a PPP model across the region at present, though the value of all of those projects is yet to be disclosed.

Colombia has the longest history of undertaking PPPs in the region, starting from 1993, but had initially excluded social infrastructure projects from its efforts. This changed in 2012 when it renewed its PPP legal framework, which saw an expansion of eligible sectors and more clearly defined the tender process. A new national infrastructure agency was created and charged with centrally managing PPP tenders for multiple sectors.

Colombia is yet to procure a healthcare PPP, focusing instead in recent years on its sprawling Fourth Generation (4G) road infrastructure programme. But recent legislative reforms suggest that this may change soon.

The government plans to tender five healthcare PPPs in Bogotá. The design and build contracts will require $590 million in total investment, and foreign investment is likely to be required.

A new PPP law was approved in Argentina at the end of November 2016, but is yet to be tested by the implementation of any specific projects. The country announced in 2018 the Buenos Aires and Neuquen Hospitals Improvement PPP project, which will see the construction, extension and improvement of six new hospitals to serve these populous provinces.

Peru has chosen to embark on exploring more ambitious and innovative models such as the public-private integrated partnerships (PPIPs), under which the private partner is additionally responsible for delivering all clinical services in one or more health facilities. This is the case in the Torre Trecca Medical Centre Redevelopment.

The administration of President Ollanta Humala has shown strong support for PPP projects and has approved key updates to the PPP law that have strengthened the framework and fostered continued private sector investment. In 2013, the administration also passed a supreme decree giving high priority to private sector co-financed initiatives that address the current gap in infrastructure and public services, including healthcare.