Until very recently, the UK-listed core infrastructure fund space was reassuringly boring. A small group of established funds had enjoyed healthy share prices as long as anyone in the industry could care to remember.

These listed funds had benefitted from steady yields on the back of stable cash flows from the large number of PFIs, PPPs and, more recently, regulated utilities which they are invested in.

But things have got more interesting over the last six months or so. For some of them, a change in investor sentiment has pushed share prices below the net asset values (NAV) of their portfolios.

The opposition Labour Party rhetoric, the collapse of a leading British contractor, heavy-handed regulations in the utility space and ongoing Brexit negotiations have all been pointed to as causes.

If the trend continues, the managers of the funds will have to find different ways to raise capital – aside from the usual tap issuances of shares – with increased asset disposals expected.

Listed infrastructure funds form a very small group within the UK’s investment trust universe, with most vehicles in this space focused on equities and bond strategies. It is not unusual for trust vehicles to bob up and down from a discount to NAV to a premium.

According to Numis Securities, there are 12 London-listed infrastructure funds investing across three sub-sectors:

On 29 January (2018), their rough aggregate value was £13 billion ($17 billion), according to Numis. The most mature sub-sector (PPP/core) comprises four listed vehicles:

The London-listed infrastructure funds have performed differently to other listed funds, having been at a premium most of their lives.

Colette Ord, director, investment companies research (property & infrastructure) at Numis Securities told IJGlobal: “Back in the global financial crisis there was a brief window when they traded on discount… The last time was 2008/9.” Numis’ most recent outlook report Listed infrastructure funds – opportunities in 2018, published in January, said these four PPP/core funds have built a strong track record over 10 years, with total returns in line or better than stated targets (7-9% per annum) driven by predictable inflation linked cash flows, gradually declining discount rates and opportunistic profitable disposals.

BBGI has been maintaining a premium on the other hand (7.98% on 11 July). Analysts point out that it has around two-thirds of its assets outside the UK. 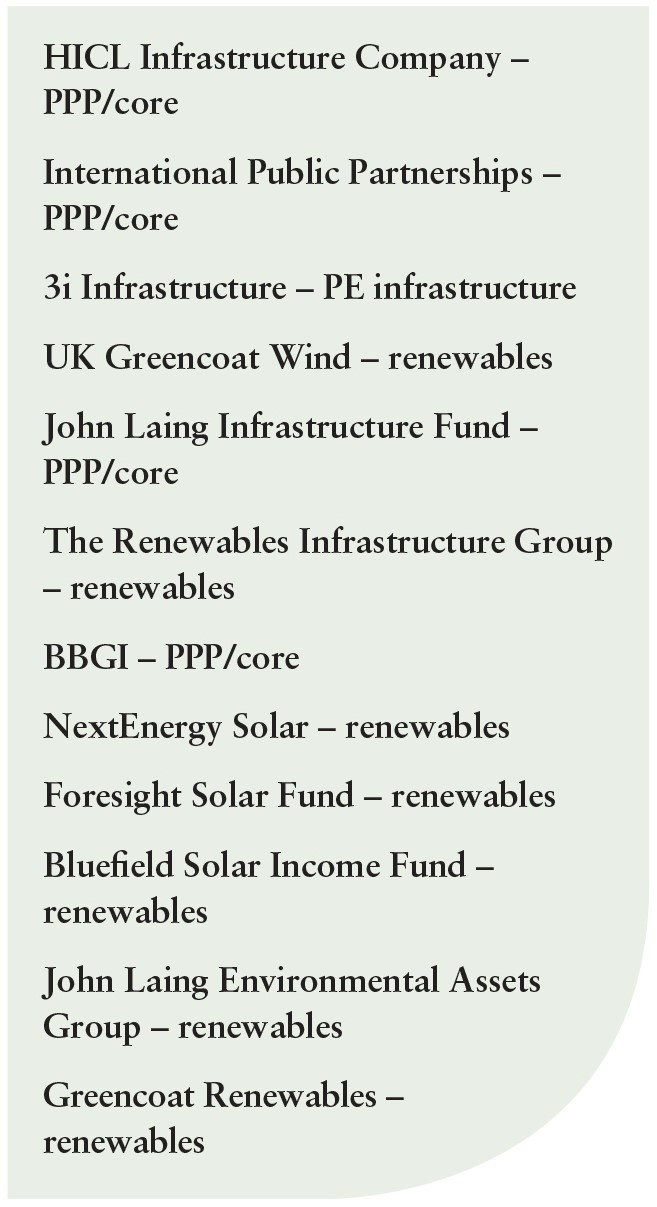 One listed fund manager in the infrastructure sector told IJGlobal: “If a fund continues to have a supportive shareholder base, trading at a discount need not be a fundamental problem.” The larger part of their investor bases tend to be institutions with a long-term outlook, they said, and the retail investors often also have a long-term intention to hold. Cash flows of the assets should continue to provide the predictable yield they invested for. HICL’s retail to institutional investor ratio is around 50:50.

But there has already been some fallouts from share prices spending time below the NAV.

INPP’s manager Amber Infrastructure took part in the auction of Cory Riverside, a London-based energy-from-waste business put up for sale by Strategic Value Partners. Amber was partnered with Dalmore Capital, a regular partner of Amber’s on UK infrastructure auctions. Cory was deserving of the ‘trophy asset’ label, with infrastructure heavyweights CKI and QIC among the large foreign rival bidders. However, Amber Infrastructure unexpectedly exited the auction midway through the process.

Three sources involved tell IJGlobal that the reason was INPP could not raise the hundreds of millions of equity capital through a share issuance. One source involved with this team said that bidding would have raised questions with their existing investors around bid valuation, especially on a trophy deal where large multiples needed to be paid to win.

If the managers were to issue shares at a discount to NAV, shareholders’ positions would be being diluted. A manager might suggest they could buy more to avoid this dilution, but shareholders are hearing a different message to the usual outperformance.

Dalmore eventually found new investors to team with, going on to win at a valuation around 21x EBITDA.

If listed funds are unable to raise capital through share issuances because of trading value, there is always another way to fund new investments.

HICL agreed to sell off its 100% stake of the Highlands Schools PFI in April for £56.2 million, and then just over a month later announced these proceeds will fund an accretive purchase of 7.2% of the A63 toll road in France for €62 million ($73.2 million).

A market source told IJGlobal that INPP is considering the sale of some UK schools PFI investments in its portfolio.

Meanwhile, JLIF is the 15% shareholder of IEP 1, a rolling stock PPP in the UK, having built up the stake through buying John Laing’s shares in the concession between 2016 and 2017. JLIF is already considering an exit, according to sources. AXA invested earlier this year, paying £227.5 million for 15%, whereas JLIF invested £146.4 million equity to build up its own 15% position, showing potential for substantial returns.

As a manager of another listed infrastructure fund told IJGlobal, managers will opt to sell the assets that are easiest. This could be where there was a recent sale for the asset, or where co-shareholders are interested in a buy-out.

Another way for a listed infrastructure investment trust to raise capital would be to gear up cash flows further. With most of the asset-level project companies of these funds already geared, they could add more debt for the fund.

Manager JLCM has recently appointed KPMG as adviser for a review of JLIF’s portfolio, suggesting more action could come. JLIF has a portfolio of 65 assets, and the review is understood to include looking at possible divestments.

As IJGlobal went to press, private infrastructure fund managers Equitix and Dalmore Capital on 16 July announced an offer to buy all shares of JLIF. They have offered to pay a roughly 20% premium to the latest closing share price.

The private infrastructure funds market has long had plenty of dry powder. Dalmore and Equitix’s cash offer shows an eager appetite for this sizeable, cash-yielding portfolio of core infrastructure assets.

IJGlobal’s closely involved source says the offer has indeed arisen out of the discount to NAV position.

The infrastructure funds invested in PFIs, PPPs and regulated assets have been buffeted by a variety of UK-specific events converging.

Carillion’s collapse into bankruptcy in January (2018) led to a number of statements from the trusts regarding their PPP contracts involving Carillion as contractor.

JLIF stated it needed to replace Carillion as the facilities management (FM) contractor on nine of its assets, incurring £3 million advisory and transaction costs. There was only one JLIF project where Carillion was still liable for construction defects and JLIF assured there should be “no material impact on the company” nor its dividend policy.

INPP said on 1 June (2018) that Carillion’s collapse affected 24 facilities and that 22 of them now transitioned to new providers on substantially the same terms, incurring a cost of transfer of less than £1.5 million.

Cracks appearing in the water sector have been harder to seal, however.

HICL invested £250 million capital to buy a 33.2% stake in Affinity Water in May 2017 (its largest holding at the time). But just 12 months later HICL has lowered its valuation of the company by £34 million and warned of potential reductions dependent on regulator Ofwat’s ongoing Price Review 19 for the next regulatory period. Ofwat is proposing clawing back high gearing outperformance of water companies across the entire capital structure including holdcos, by including floating rate debt in their cost of capital calculations. HICL said Ofwat’s spending targets were “challenging”.

And the UK political environment could prove a longer-term problem.

Ord told IJGlobal: “The main driver of the de-rating in shares is the perception of political risk. Those perceived to be more politically exposed have a wider discount… The quite aggressive rhetoric was particular logged at the health sector, at the PFIs and acute hospitals especially.”

In September 2017, shadow-chancellor John McDonnell said he intended to abandon PFI for future projects and bring existing PFI contracts under government control if Labour won the next UK general election. Concerned managers were given a mere crumb of comfort when he then partially backtracked to suggest only those contracts not deemed to provide value for money would be renationalised.

In November 2017, JLIF said the compensation for voluntary termination is expected to be 86% of UK portfolio value, and that the UK portfolio accounts for 71% of the entire portfolio. Numis said in its January 2018 outlook report. “All else equal we calculate this would reduce NAV by circa 10%.”

INPP responded to say that only 8.2% of its portfolio is equity investments in “classic PFIs”, with 3.8% in senior debt for classic PFIs, plus 10.2% is equity in “building schools for the future” projects, meaning it has only “relatively modest” exposure.

Even so, this perceived political risk has added potholes to what was until recently a very smooth road with few sharp turns.

And the uncertainty surrounding Brexit has not helped.

Taken off the shelf

Several recent opportunities for this London-listed infrastructure funds market to widen were written-off.

HICL’s former lead Andrew Charlesworth was ready to bring the Tri-Pillar Infrastructure Fund to the London Stock Exchange to raise £200 million, for equity and sub-debt investments. North America was the particular focus, with mainland Europe also a target. The aim was to do something different to the existing players, to achieve value by targeting utilities and assets and concessions with usage or third party-based revenues rather than government availability payments, and to invest with construction or refurbishment risk. The IPO was called off as a significant acquisition opportunity was not advancing definitively.

Greensphere Capital was due to launch a $500 million dollar-denominated London-listed vehicle, targeting North American, Western European and Nordic countries listed and private sustainable infrastructure investments. But when it was pulled, Greensphere said the cancellation was to accommodate cornerstone investors.

Gravis Capital Management also cancelled an IPO more recently in April (2018). Its planned £200 million Global Diversified Infrastructure Fund was pulled with around £75 million in soft commitments. The manager issued a statement on the UK market that “current market conditions represent a challenging background in which to raise equity capital”.

None have since returned to the market. Greensphere tells IJGlobal it is evaluating options with cornerstone investors still and can provide no further update.

But while there are discounts and retail investors have been reading the inflammatory headlines, some institutions see this as an attractive time to buy into the existing funds.

Ord said: “Some institutional investors looking see two very appealing trends. The cashflows which pay the dividends are firmly protected in law and are attractive compared to other government backed income streams. These are hard to replicate. And, as the particular assets they own continue to be traded at valuations higher than the NAV, [showing] conservative valuations, it becomes a relatively attractive entry point.”