India recently unveiled plans to set up the world’s largest refinery at Babulwadi, Taluka Rajpur in Ratnagiri district. The project is expected to cost around $40 billion and have a refining capacity of 60 million tonnes per annum. The refinery will be developed by Indian state-owned oil firms Indian Oil Corporation, Hindustan Petroleum Corporation and Bharat Petroleum Corporation in partnership with Saudi Aramco.

This ambitious endeavour is being driven by India’s resilient oil demand outlook, and is expected to be followed by other similar initiatives – greenfield and brownfield – which will be developed by private and state-owned companies in the coming years.

The country’s overall oil consumption is expected to increase by 129% as compared to 2016 levels and to reach 485 million tonnes of oil equivalent (Mtoe) by 2040. 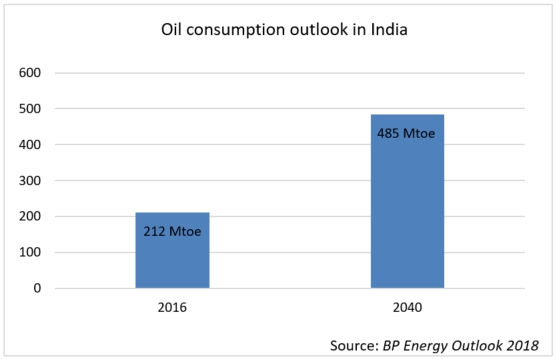 Alongside the need to meet its domestic demand for crude oil, India has also been trying to position itself as a global refining hub. Being the third largest energy consumer, India’s refining capacity is estimated to reach 458 million tons per annum by 2040, according to the International Energy Agency, from its current level at 238.3 million tons per annum (as suggested by IJGlobal data).

As demonstrated by IJGlobal data, India’s downstream projects are spread all over the country but close to half of oil refining facilities are concentrated in the state of Gujarat. 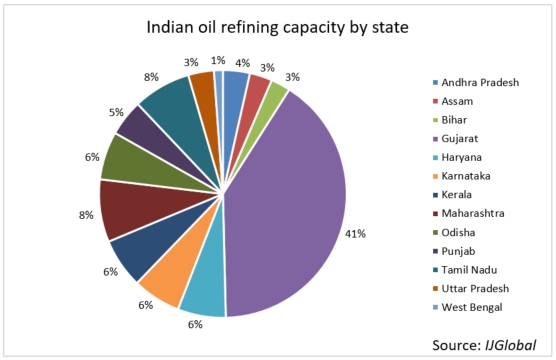 Operational refineries in India are mainly owned by the state, according to IJGlobal data, although some are privately owned. 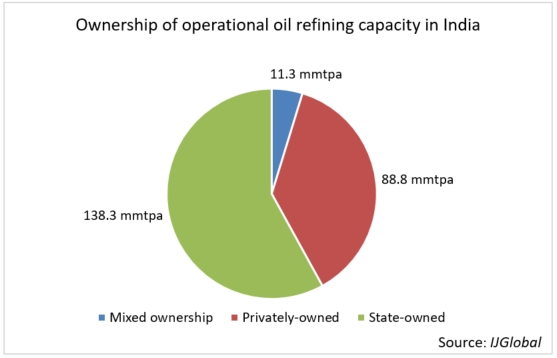 Many leading Indian refiners have outlined ambitious plans to raise their capacity by 77% by 2030, as reported by government, to meet the country’s rising fuel demand. IJGlobal data shows 14 projects already in the pipeline.

Indian Oil Corporation has plans to raise its yearly capacity to around 185.7 million metric tonnes per annum (mmtpa) by 2030 by investing some $22 billion. The company is looking to expand its Barauni oil refinery to increase its current capacity from 6 mmtpa to 9 mmtpa. Work is also to be carried out at the Gujarat refinery in order to raise capacity from 14 mmtpa to 18 mmtpa.

Meanwhile, approval is still to be obtained for the $5.4 billion investment aimed at raising capacity of the Guwahati and Bongaigaon refineries in the north east Assam state, and the Paradip plant in eastern Odisha state.

Hindustan Petroleum Corporation is looking to make an investment of more than $9 billion for its expansion plans. It is seeking to raise the Visakhapatnam refinery’s capacity from 8.3 mmtpa to 15 mmtpa and Mumbai refinery's capacity from 7.5 mmtpa to 9.5 mmtpa.

The company has also signed an agreement with the provincial government in Rajasthan to build a refinery in Barmer, which will have a capacity of 9 mmtpa.

India is emerging as one of the global drivers for refined fuels consumption and production.