As a young journo working the local press world in 1990s north east Scotland, an old editor – a grizzled hack bearing the scars of hard-living hackery – once said: “Angus, the difference between doctors and journalists is that doctors get to bury their mistakes, ours are out there for everyone to see.”

Words to live your career by.

It’s at times like this – a week or so from publishing the launch issue of what is to be a regular feature in the IJ stable: reports on global infra funds – that these words echo in my ears, his face swims into view, cigarette clamped between lips, moustaches bristling.

Late last year, we stepped up IJ’s coverage of infra funds and M&A activity with a dedicated product – IJInvestor. We were already covering these beats (a lot), but now it had its own site. Meanwhile, in the background we were feverishly building a data product. The team has actually been working on the database for the last two years and the fruits of this labour are about to be harvested.

Soon we will publish the launch issue of the IJInvestor: Funds and Investor Report focusing on the wider market – with a drill down into Q1 2018. It does not only focus on funds that reached final close in Q1 2018, but draws a wider comparison between previous years, as well as calling the market for future fundraising.

A regular element will be quarter-on-quarter analysis, identifying the number of unlisted funds – closed- and open-ended, equity and debt – that reached final closed in Q1 on a global basis, drilling down into that data and comparing it with previous years (see image).

And our findings are very different to those of our competitors leading us to believe that our coverage is more complete as we all seem to have the same definition of infrastructure.

For a start, we have $21.6 billion raised in the first quarter of 2018 for unlisted infrastructure funds focused on infra/energy on a global basis. And this was achieved through 16 final closes.

Without pointing the finger too heartily at our competitors – Infrastructure Investor, Preqin and Inframation – and guffawing with delight, a couple of them had funds raised in the $5.7 billion range while the other one had data for less than half of our $21.6 billion.

As to final closes logged in Q1 2018, rival titles have somewhere between four and seven – while we had a whopping 16 that made it over the line.

That’s a lot of clear water between us and our rivals.

Why believe our figures?

You’ll have to wait for our launch issue of the magazine – followed by a digital version with all the drill-down capability you could want – so if you’re looking for us to lay cards on the table in an open format… fat chance.

For that, you’re welcome to get in touch for a trial and put our data through its paces: click here to send an email…

However, it would be churlish not to give a bit of a peek behind the curtain where we have a whole team of data specialists pulling levers and pressing big red buttons with alarming regularity.

Looking at the headline figures, since infrastructure funds first reared their heads they have gone to market targeting $805 billion in fundraising, ultimately bringing in $721 billion. 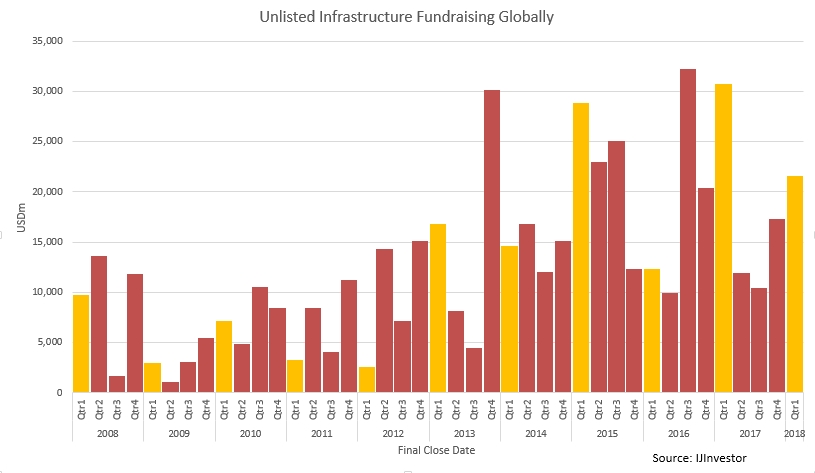 But that’s very big picture. Due to the nature of such reports, a lot of it focuses on quarter-by-quarter progress. Q1 2018 saw $21.6 billion in capital raised – a considerable drop when compared to the corresponding quarter in 2017… which came in at $30.75 billion.

However, as with all data analysis, you strip out the spike deals to give a more realistic view of the underlying market. To achieve that, we remove Global Infrastructure Partners’ $15.8 billion 2017 fundraise.

Received wisdom has it that with 2017 having been a poor year for fundraising – the lowest year for funds achieving final closes since 2011 – that 2018 was set to continue that trend.

A healthy indicator that this is not the case is that Q1 2018 logged precisely the same number of final closes by infra funds that was achieved in Q1 2017.

Coming to a screen near you…

We are excited about the impending release of the full IJInvestor infra fund / M&A report and while it’s not fair to scoop it on all the details, here’s a few more data points for your entertainment.

Some 70% of capital raised in Q1 2018 was pulled together by the five largest funds, confirming their continued domination of the market. However, we believe that this theme is overplayed (more on that in the full report).

Needless to say, there has been a massive shift in focus away from European PPP with a lot of that enthusiasm turning towards renewable energy – something that will continue for the foreseeable future and in increasingly challenging markets.

Sticking with the decade-view, transport has taken a bit of a turn for the worse with it accounting for 16.2% of acquisitions over that period, but in this quarter (Q1 18) it comes in at 7.7%.

And then there are the LPs, research on sources of capital from 2017 and 2018 (year to date) saw an interesting spread among the three leading regions:

Referring back to all our data (remember, we’ve been steadily building this for two years and it dates back to the first days of infra funds), shows:

As to nationality, 55% of all LPs are from the US or the UK.

And then there are league tables – no, we can’t help ourselves – and the top players are:

There’s so much more, but you’re going to have to wait for that. And it’s worth waiting for. A view of the market that is totally at odds with what our rivals say.

We look forward to you putting this through its paces and discovering… there’s a lot more going on out there than you have been told.

And now you know where to find it (IJInvestor… just in case you missed it).