China and Japan contest more than just islands in the South China Sea and official histories of the 19th and 20th centuries. The Asian rivals also often face off over energy and infrastructure projects.

The two countries are increasingly pitted against each other due to both being huge outbound investors in recent years. IJGlobal data reveals the Japanese have an edge over their Chinese rivals when it comes to deal volumes, but the gap is narrowing.

Japanese firms have been looking abroad for growth and until 2016, did far more outbound deals than their Chinese counterparts. The country has long been exporting the financial muscle of its major banks such as SMBC and MUFG, and its cash-rich multilaterals JBIC and JICA, to help secure natural resources for its domestic market, win contracts for its major developers, and find a home for excess capital.

China has, however, been narrowing the gap since 2015, two years after the One Belt One Road (now rebranded Belt & Road) was unveiled by Premier Li Keqiang. Belt & Road on paper sets out to re-establish ancient trade routes, but in practice has amounted to increasing investments in projects in favoured countries. State banks such as ICBC have also been growing their international teams, Chexim is now the busiest export credit agency in the world, and Chinese companies (some previously unknown) have become regular entries on bidding shortlists. 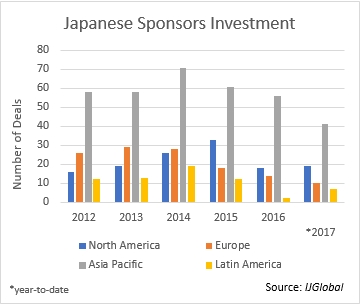 Home is where the counterpart is

The pair are highly active in their home region, Asia. And tenders for major contracts in the region, for everything from conventional power to high-speed rail, often boil down to a battle between China Inc and Japan Inc.

However, the Japanese have shown a stronger preference for the region than the Chinese, who have been on a deal binge in Europe since 2014. 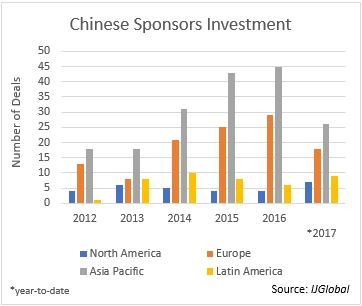 By contrast, in terms of deals executed, Japanese sponsors have been putting their money in their backyard. In 2016, the Japanese did almost twice as many deals in Asia as they did in Europe and North America combined. Another reason for the sheer number of deals won by Japanese sponsors is that they are more willing to take minority stakes, rather than the total majority preferred by Chinese sponsors. 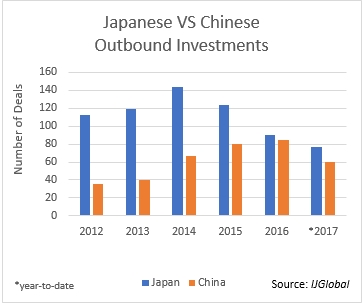 One example is the holy grail of infrastructure investment in Asia: independent power producer (IPP) projects in Indonesia. Shenhua Group took 70% of the equity in the 2,000MW Java 7 coal-fired power plant, the last Chinese sponsored IPP to reach financial close. In contrast, Sumitomo Corporation and Kansai Electric split their share of the 75% equity stake on the 2,000MW Tanjung Jati B coal-fired power plant and local developer Adaro split its equity investment three ways with two other Japanese partners, J-Power and Itochu, on the 2,000MW Central Java coal-fired plant.