The number of solar deals to reach financial close in Australia has increased steadily from 2013 to 2017 and - while challenges lie ahead for the industry this coming year - there is a strong pipeline and sufficient incentives in place for investors and developers to carry on closing deals. 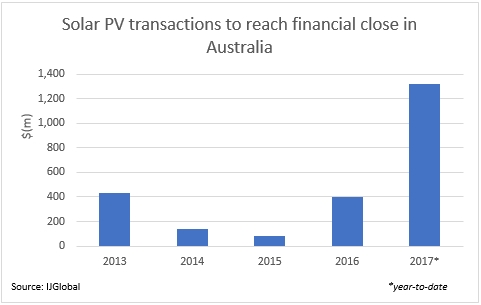 From the start of 2016 to June 2017, the total value of solar deals to close in Australia was A$1.9 billion, led by the 430MW Riverland Solar and Battery Storage Farm which was worth A$758.36 million, and the 150MW Lilyvale PV Solar Plant which was valued at A$400 million. In that time, Australia has seen 11 solar deals reach financial close.

There is a lot of enthusiasm for solar PV in the coming year (2018) with expectations of a shift towards mixed solutions like hybrid renewable energy and storage projects that combine solar with other technologies to capitalise on the strengths of the combined technologies, along with increased corporate PPAs as companies rely less on government grants.

Indeed, according to data from the Department of the Environment and Energy, the benchmark levelised cost of energy (LCOE) for solar in Australia is now around A$95 per MWh ($72.33), which BNEF reports is well below the A$107 per MWh benchmark for gas and A$182 per MWh for new coal.

Chan adds that the strong influx of developers into the solar sector in recent years and an increasing investment appetite from a widening base of institutional investors are helping fuel growth.

In September 2016, ARENA completed the large-scale solar PV competitive round which resulted in A$92 million in ARENA grants being awarded to 12 solar PV projects with total generation capacity of 482MW. CEFC has provided debt funding to a number of these projects and other solar PV developments.

Jo Crew, an Australia-based partner at Norton Rose Fulbright who focuses on renewable projects, told IJGlobal that CEFC has significant funding available from the Australian Government and that he expects CEFC to continue to be active in the market as a lender to solar PV and other clean energy projects. However, there are some challenges in the market that investors and developers need to be aware of.

“While the offtake market has improved, obtaining finance without offtake remains a challenge,” said Crew. "With increased levels of activity in the sector, securing connection in some areas can also cause time delays."

Crew still believes that the solar sector will remain strong but not at the same “intense level of activity as the last 12 months as the existing ARENA programmes roll off”. There will be a shift towards corporate PPAs and behind-the-grid solar developments for large electricity users, including the industrial, oil, gas and mining sectors.

Jeremy Hasnip, deputy general manager, head of power & renewables (Australia) for SMBC, said that he has a large number of solar PV deals reaching financial close for two key reasons. The primary reason is that a number of smaller projects that bid into the ARENA grants programme were able to proceed with relatively small grants - typically around 10% or less of the enterprise value.

“More significantly, a second group of larger-scale projects - including Clare and Bungala - were able to reach financial close without the need for ARENA grants. This group was able to compete directly with large-scale wind projects without additional subsidies as a result of further falls in the price of imported machinery, the continued strength in the Australian dollar, and low-interest rate environment,” said Hasnip.

With continued support and market enthusiasm for the solar sector in Australia, IJGlobal anticipates that this positive trend will continue into 2018 and beyond.