The private activity bonds (PABs) that financed a portion of the Indiana I-69 PPP were last week downgraded to junk (BB). The downgrade came as a result of construction delays, unresolved payment issues, and the financial deterioration of Isolux Corsan, parent of the project’s construction contractor.

The debt for Indiana 1-69 is now at risk of default, which has led some to call into question the use of tax-exempt bonds for US transport projects. 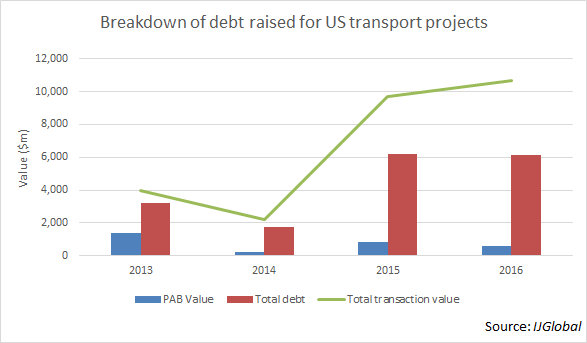 PABs provide a lower cost of funding for project sponsors and have been a mainstay in the US transport market in the last few years, often pricing out other commercial lenders. According to IJGlobal data, $3.1 billion of PABs have been issued for US transport projects in the past four years. The total value of PABs debt for 2016 so far is $585 million, according to IJGlobal data. However the majority of this total relates to the recently closed Maryland LRT transaction. The urban transit project was financed using $313.04 million of PABs. The remaining financing came in the form of an $874.6 million TIFIA loan, leaving no space for commercial lenders.

With PABs particularly vulnerable to construction delays, the problems suffered by the Indiana I-69 project could lead to greater scrutiny of their use.