The half-yearly value of bond financings backing energy and infrastructure projects has been rising globally since the end of 2014, and grew again in H1 2016, according to IJGlobal’s latest league table report. The last three months of the period were particularly busy, with more than $10 billion of the $15.82 billion H1 2016 total being closed between the start of April and the end of June. 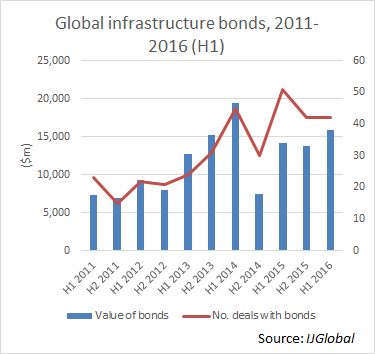 While the number of infrastructure transactions featuring bonds plateaued in H1 at 42, only one previous half-year period has seen more bond-backed deals (H1 2014 with 45). The general upward trend of the volume and value of bond issuances in the infrastructure sector in recent years can be viewed as a reflection of growing institutional investor interest in in the sector. Bank lending, though still by far the most common form of debt instrument, has represented a reduced share of the infrastructure debt market in recent years. 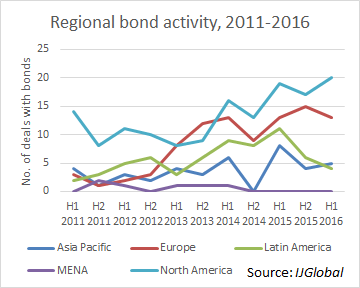 The surge in bond issuance in 2016 has not been a trend replicated in all regions however. The vast majority of infrastructure-related capital market debt raised this year has occurred in the North American market. The largest transaction to feature bonds so far this year has been the $3.81 billion LaGuardia Airport project in the US, which featured bonds totalling more than $2.41 billion – roughly equal to all the project-level bond debt raised in Latin America this year. 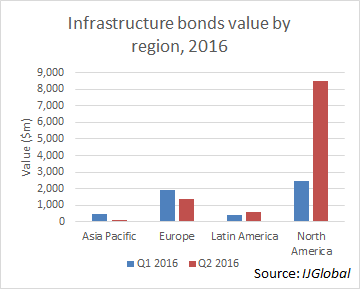 There have been several large bond issuances in the oil & gas sector in the year-to-date, which is typical, but there have also been numerous transport deals in the US featuring issuances. The $2.4 billion MTA Maryland Purple Line PPP recently closed with a number of senior private activity bond tranches, while February’s financing of the Chicago Skyway toll road featured a $975 million private placement.