Institutional investors in Australia have fast growing pots of capital to invest, and have long been comfortable with infrastructure as an asset class. These investors are increasingly looking to foreign markets for assets, but more attractive new opportunities may be closer to home.

Political disputes at the state level have slowed numerous privatisations and infrastructure projects in Australia in recent years, and the result of next month’s tightly contested general election may further impact procurement programmes. But the country has a bulging transport pipeline, as recently reported by IJGlobal, and some superannuation funds are beginning to show interest in debt instruments.

The domestic lending market is dominated by the major Australian banks. But these banks are reticent to lend long-term due to the nature of their funding. So could institutional investors plug a gap in the market by offering longer tenors to sponsors?

Too much capital, not enough assets

Damien Frawley, CEO of one of Australia’s largest fund managers QIC, told IJGlobal in an interview at the end of last year that there is roughly a A$2.2 trillion ($1.59 trillion) pot of superannuation savings in the country. The compulsory and regulated system of employee earnings being automatically invested into superannuation funds mean this pot is due to rise by 9.5% each year.

As in other countries around the world, institutional investors in Australia allocate only a small portion of their capital in infrastructure. But established Australian fund managers such as IMF Investors, AMP Capital and Hastings have been investing large amounts of institutional money into infrastructure for a long time. According to IJGlobal data, IMF is the eighth largest investor in infrastructure equity globally since 2011, having committed more than $17 billion across 24 transactions.

The picture is not a happy one however. The lament of too much capital and too few assets is one which has been heard in mature infrastructure markets for a few years. IJGlobal data suggests that the situation is getting worse, with the global pipeline of active transactions falling from around $950 billion in 2015, to under $700 billion as of May 2016. And with bidding auctions already fiercely contested in European markets, bidders will be less than keen for extra competition.

An alternative to banks 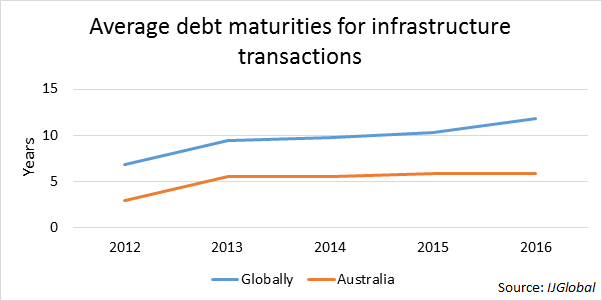 The burgeoning pipeline of projects in the Australian market may create opportunities to invest through debt however. The project bond market is relatively small in the country and private placements rare. Since 2011 only 36 infrastructure transactions in Australia have featured bond financings, with those debt instruments totaling just $36 billion, according to IJGlobal data. Over $240 billion in bank debt has closed across 324 transactions during the same period.

Local and international banks have traditionally only offered short tenors of three to seven years to project sponsors. The local banks that dominate the sector have liquidity issues due to a paucity of traditional savings in Australia, and so are reluctant to lend long-term.

International banks have in turn been reluctant to compete on maturities with the local banks, although a recent exception was the Hornsdale wind farm for which KfW and Societe Generale provided 19.5-year debt to support a 20-year power purchase agreement last year.

So there is a gap in the market to provide long-term financing to infrastructure assets, and some superannuation funds are understood to be seeking out debt opportunities. Whether institutional investors have the appetite, expertise or structures in place to compete with the banks is yet to be seen however.